An Iowa City native’s journey through skateboarding and music led to a path in medicine and a Fulbright Grant. 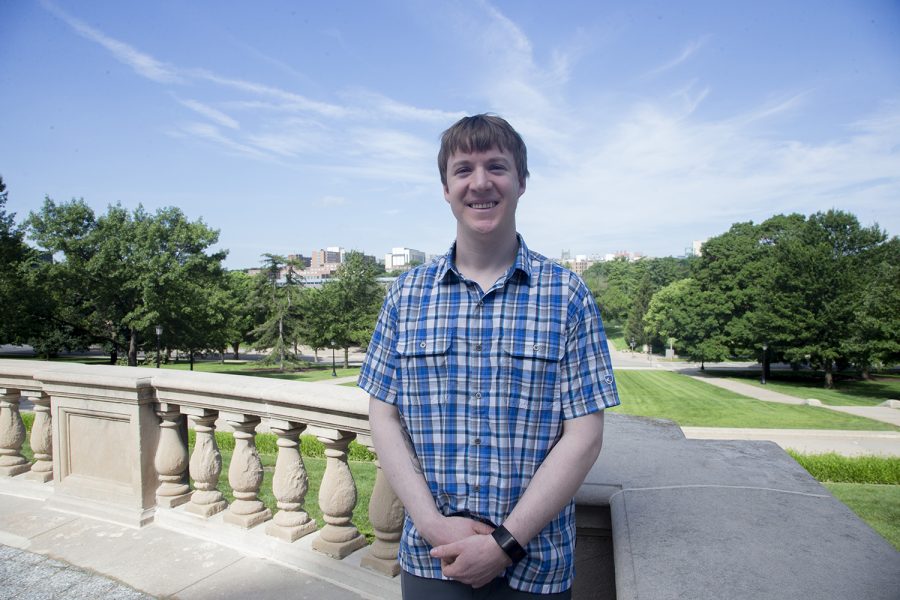 From skateboarding and hip-hop to teaching English in Mexico, University of Iowa student Erik Ovrom’s unique story has led to his becoming one of this year’s Fulbright scholars.

Before heading to the UI, Ovrom hurtled through the competitive-skateboarding scene in California. An injury forced him to choose a different path. Even though he hung up his helmet and knee pads, he still keeps his skateboard at home.

Ovrom, now 28, has just completed a B.A. in interdepartmental studies in the health-science track and a minor in Spanish, and he hopes to attend medical school. He will travel to Mexico City to teach English with his grant. For Ovrom, expectations are best tossed out the window.

Chasing dreams of skateboarding and making hip-hop music in California sounds like the perfect setup for taking the path not beaten when looking at the Iowa City native’s family tree. His mother was the medical director of the Iowa City Free Medical Clinic, his father is a physician, his twin brother was a Fulbright scholar and Ph.D. student, his older brother is a practicing lawyer, and his sister is a social worker.

“I was definitely the most different in my family,” Ovrom said. “To see me experiment and find my story as an individual and see that it led [to medicine] I think made them happy and taught them a little something.”

After returning to Iowa City, Ovrom enrolled at the UI and started volunteering at the clinic in which his mother worked, serving as a medical interpreter between physicians and their patients, who were often immigrants from such places as Mexico and El Salvador.

He took his first step into the Fulbright world when one of his teachers, Michael Zmolek, recommended he do so after Ovrom took his International Studies course. Of course, Ovrom had his doubts about receiving the grant — they did not last for long.

“You just have to make the decision to believe in at least the possibility of getting it, or else it’s impossible to even start the groundwork,” Ovrom said.

Although his time in California was a far cry from what he plans to do in the future, he will be pulling from that past to bring a unique spin on teaching children English on his journey. His solution will be to teach the kids through hip-hop and rap. He will also volunteer at a primary-care clinic and conduct research on the practice of traditional medicine.

“He has many diverse interests and has a passion for learning and doing things right,” UI Lecturer Ana Fernández said in an email to The Daily Iowan. “All these qualities make him an outstanding student and a well-rounded person.”

Fernández taught Ovrom in her course “Medical Spanish in Contemporary Society” in the 2017 fall semester, a course taught completely in Spanish for students heading for degrees in the health professions. What stuck out the most about Ovrom to her, she said, was his work ethic, his maturity, and his volunteer work in the community.

This year the program is focused more on cultural exchanges similar to what Ovrom hopes to bring to Mexico City.

Karen Wachsmuth, the associate director of international fellowships at International Programs, works with scholars through the Fulbright application process and beyond. She said there is no mold or one unique path for Fulbright.

“Recently, the program has undergone a rebranding and a new mission statement,” Wachsmuth said.