Bernie Sanders outlines his ideas for the future of college education

In an interview with The Daily Iowan, Sen. Bernie Sanders detailed his higher education policy, which includes free college and cancelling student debt. 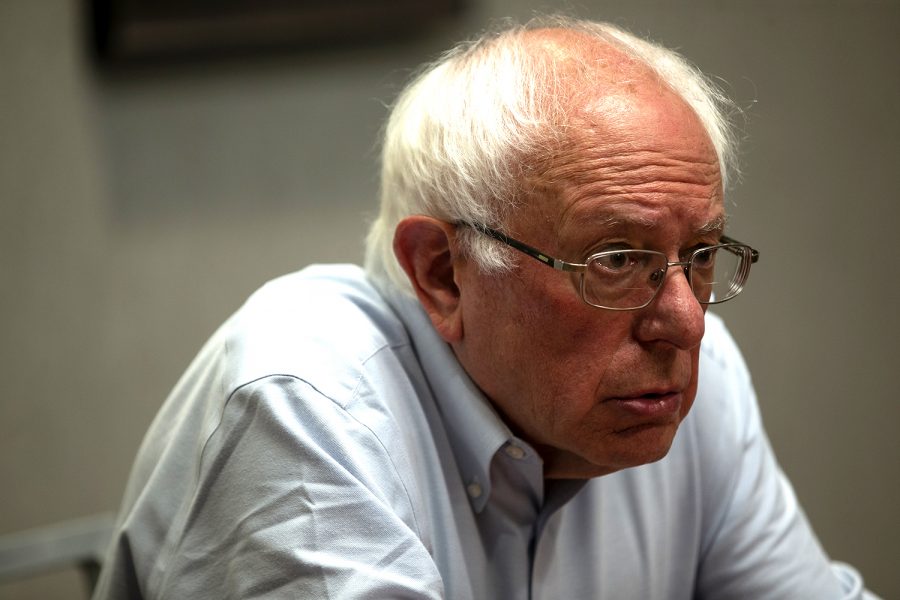 Presidential-nomination candidate and U.S. Sen. Bernie Sanders is campaigning on the vision of wiping out all student debt and establishing free tuition for public universities as part of an opportunity to appeal to student voters and distinguish himself from the other candidates, he told The Daily Iowan.

Sanders introduced legislation June 24 to lift student debt off the nearly 45 million graduates across the nation with debt. His plan would also eliminate tuition and fees for public universities, community colleges, trade schools, and apprenticeship programs.

He said he recently shifted toward canceling all student debt in order to make the policy “simpler, clearer, and more comprehensive.”

Student loan debt is currently at its highest, $1.56 trillion. An estimated 55 percent of University of Iowa students graduate with student debt, according to a February UI presentation for the state Legislature. The average debt for the UI class of 2016 was $14,680.

In response to some critics, Sanders said his programs to cancel debt and enact his College For All Act would minimally subsidize wealthy college students, because the majority of public-university students are working or middle class.

Sanders emphasized that his idea for free public colleges and trade schools is not a radical notion, because tuition decades ago was significantly less expensive and other countries such as Germany (free in pubic universities, but there are some fees) and Scandinavia have similar systems.

As a result, he said, he’s seeing governors and mayors across the country moving in the direction of free college.

“Right now, by and large, with some exceptions, people need a higher education in order to go out and get the new, decent paying jobs that are out there,” Sanders said. “So we need to rethink what public education means and in my mind now, that means K through college.”

The combination of his free public-college tuition program and the cancellation of student debt would cost around $2.2 trillion over the course of 10 years, which he admitted is a lot of money.

Sanders proposed funding the programs through a tax on Wall Street financial-investment transactions.

Sanders met with several UI adjunct professors on July 3, who, he said, told him that some UI students have to work up to three jobs to pay for high tuition prices.

Adjunct professors teach at universities for a limited term, such as single semesters. They often work part-time and are subsequently paid less than other types of professors.

UI Assistant Vice President for External Relations Jeneane Beck said in an email to The Daily Iowan that the UI has no comment.

Sanders spent time in Iowa City for an ice-cream social July 2 and a campaign office opening on the afternoon of July 3.

Marc Daniels, 63, compared establishing free college to putting a man on the moon. He said the policy initiative is a target to work toward.

“You have to have a vision so you can get people to buy into the vision,” Daniels said at the Sanders office opening. “Then can you put together different parts of the vision.”

However, he said the perception surrounding the socialist aspects of Sanders’ policy could hinder the campaign.

Zachary Gray, who attended the office opening, thinks Sanders has quality ideas to assist students, especially his plan to tax Wall Street to help pay for college expenses. Gray, 21, currently plans on caucusing for the senator.

“When you actually read the way he wants to pay for [free college], it actually makes sense,” Gray said. “Everybody says you’re just going to have to raise taxes, but not necessarily raise taxes on you and me.”