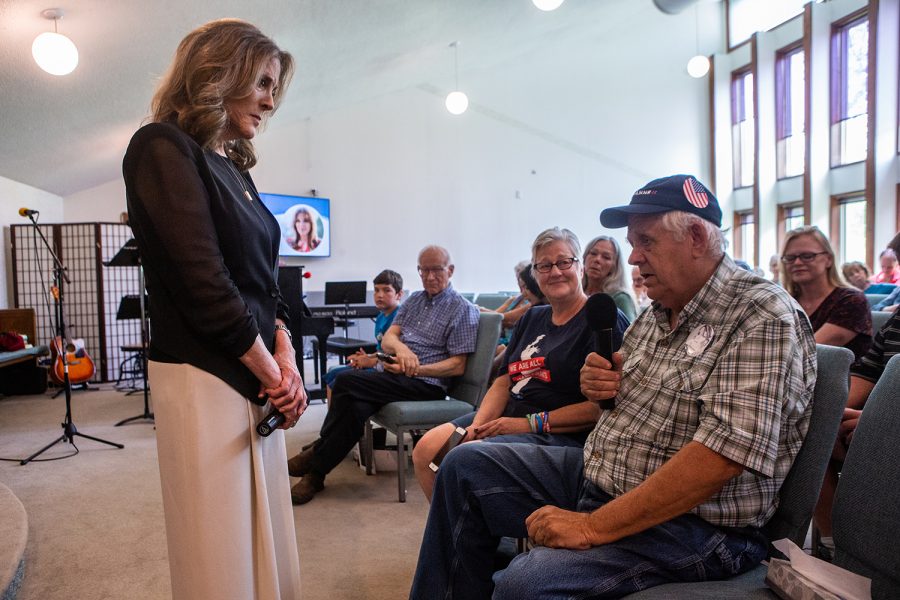 during a town hall event at the Unity Center in Cedar Rapids on Sunday, June 30, 2019. (Wyatt Dlouhy/The Daily Iowan)

Marianne Williamson, author and Democratic presidential-nomination candidate, advocated for children’s wellness and the integration of compassion and love into politics in a town hall at the Unity Center of Cedar Rapids on June 30.

Williamson’s speech spent ample time on the issue of children living in traumatizing conditions in places in the U.S. She said children are in a critical development period, and it is therefore essential to aid the millions of children suffering problems including chronic hunger.

“I’ll tell you what to do if you want economic prosperity 10 years from now — take better care of the 10-year-olds of today,” Williamson told an audience of around 50. “When you have the millions of children chronically at risk today, we need to really up this. We need to unleash the spirit of America.”

As president, Williamson said, she would establish a domestic department of peace as well as a department of children and youth to position children’s welfare issues as national priorities.

The moral injustice of inequality in the U.S. was a prominent theme in her speech. Williamson said the U.S. has regressed in the past 40 years, transitioning from a democracy to an aristocracy. She criticized the economic inequality and resources concentrated in the hands of few in the nation, sainging capitalism should return to its “moral core.”

She also affirmed her support for many progressive political issues, such as reversing climate change, legalizing marijuana, and expunging the records of everyone convicted of a marijuana-related crime.

She also spoke in support of establishing a $15 minimum wage, a Medicare-for-all health-care system, universal background checks, and free college at state universities. She emphasized that these issues would be just the beginning, not the end of her mission.

“To me, it’s a moral principle and an essentially Democratic principle that you use the resources of the government to secure the rights of life and liberty and the pursuit of happiness for every person,” she said in an interview with The Daily Iowan.

Williamson also spoke before the Unity Center congregation at their Sunday service, at which she said she went into less detail about politics in comparison to the town-hall meeting afterwards. The Cedar Rapids stop fell in the middle of her Iowa tour this past weekend, where she traveled from Sioux City to Bettendorf.

Monica Beranek, who attended the town hall, said Williamson has been a beacon of hope, and she considers Williamson a role model

“It just made me feel so inspired to see up on that stage with all those other Democratic candidates, and I feel like there’s truly a shift in our culture for the better that she was there,” Beranek said.

Jan Hartman said she liked that Williamson responds to people in the audience by looking at them, going to meet them, and conversing. She plans on caucusing for Williamson in February 2020.

“I really appreciate her sense of truth and her sense of integrity,” Hartman said. “I think it’s great there’s a consciousness that is in of her that is reflective of a lot of us that just don’t know how to solve these big problems.”