The Iowa football coaching staff was in New England earlier this month, and some of the Ferentz clan reunited with Patriot head coach Bill Belichick. 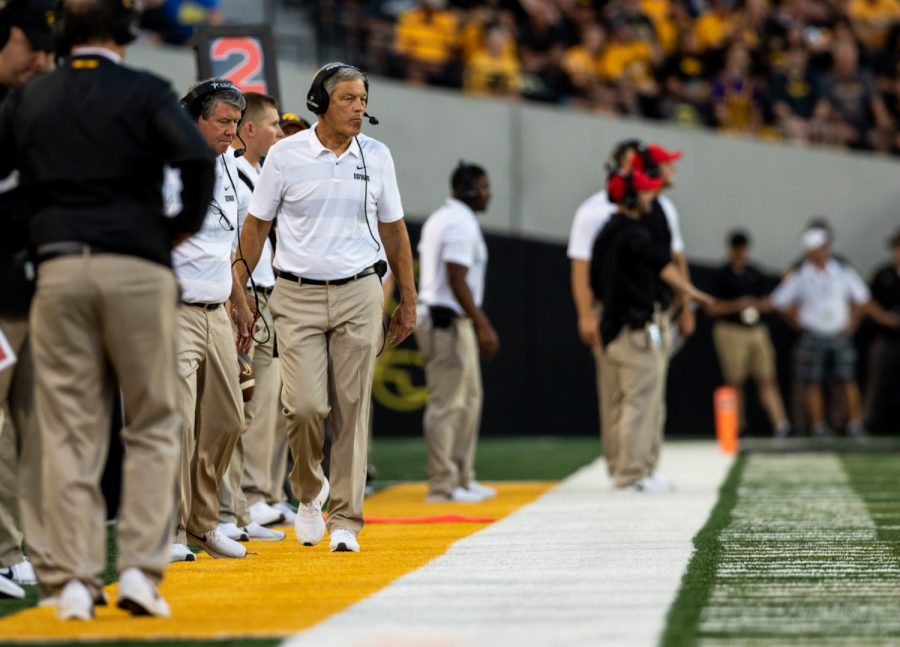 New England Patriot head coach Bill Belichick is fresh off his sixth Super Bowl championship since he took over as head coach in 2000. He is the longest tenured coach in the NFL by a wide margin and is widely considered to be among the finest coaches the sport has ever seen.

Taking all that into consideration, it makes sense that other coaches would want to absorb as much knowledge as possible from Belichick, which is why the Iowa football staff took a two-day coaching retreat to Foxborough earlier this month.

The trip was a reunion of sorts for Belichick and Iowa head coach Kirk Ferentz. The pair have had a relationship since Belichick, then the head coach of the Cleveland Browns (now the Baltimore Ravens), hired Ferentz as offensive-line coach in 1993.

Ferentz coached under Belichick for three seasons before the latter was fired. Ferentz then followed the Browns during the franchise’s relocation to Baltimore. Three years later, Ferentz was named the head coach at Iowa after Hayden Fry’s retirement.

During their time together, Ferentz apparently made quite the impact on the Patriots’ legend. After one of the practices that Ferentz attended earlier this month came to a close, Belichick asked him to address the team, according to Mike Reiss of ESPN.

“He’s the winningest coach in the history of Iowa football,” Belichick said in a release. “He’s the longest-tenured FBS coach at one school in football. He’s coached at every level very successfully, so I think his résumé speaks for itself. He’s a tremendous person; I learned a lot from him in the three years that he coached for me at the Browns.”

Belichick also expressed gratitude toward Ferentz, particularly when it comes to sending some members of the Ferentz family his way.

“I’m grateful for our friendship and relationship and the family members that he’s sent us,” he said in a release.

The family members Belichick refers to are two of Ferentz’s sons, Brian and James. Both have had tenures in New England under Belichick in a continuation of the Belichick/Ferentz relationship.

Brian joined the Patriots in 2008 as a scouting assistant, eventually becoming an offensive assistant two years later. The next season, he was promoted again to tight-end coach. During his time leading the position, Rob Gronkowski become the first tight end in NFL history to lead the league in touchdown receptions.

James Ferentz has been on the Patriots’ roster for the past two seasons as an offensive lineman, and he was on the sidelines when the team won the Super Bowl in Atlanta this past February.

He was not the only Ferentz on the sideline.

His father had been camouflaged near the New England bench, and after the final seconds had ticked off, the two were able to celebrate the 2019 Super Bowl title together.

It was the latest in a long line of rewarding collaborations the Ferentzes have had with Belichick during the nearly three-decade relationship, which spans two generations.

The Ferentz family coaching tree gains recognition routinely, especially in the state of Iowa. However, when someone such as Belichick has as much respect and admiration as he does for the Ferentz family, it comes with a different level of credibility.