A more colorful Iowa City Downtown has been splashed with color with an increase in the number of public murals. 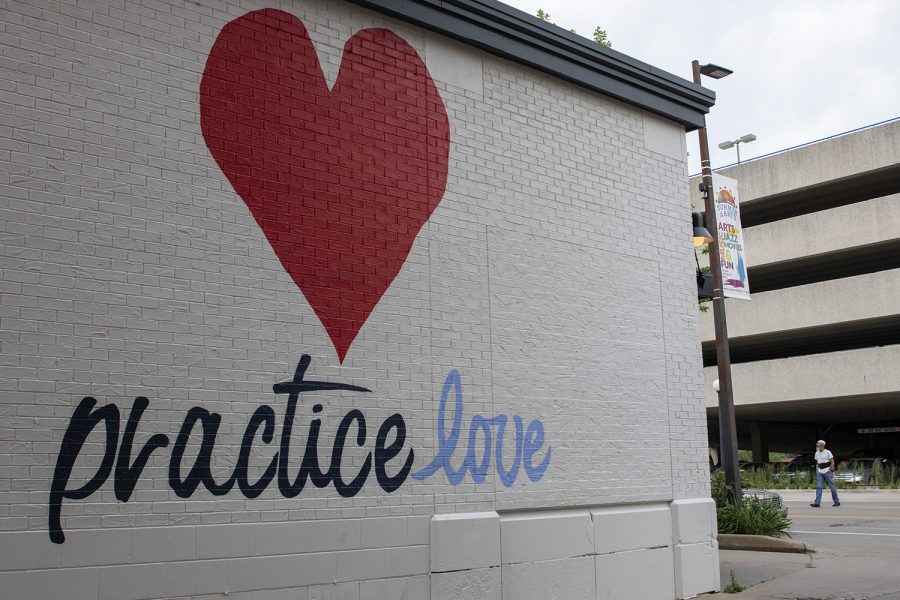 Art has the unique power to reflect our community and all of its different colors. With a recent increase in the number of public murals, paint has found a new canvas on the buildings of Iowa City.

One of the biggest proponents of murals in downtown has been the Iowa City Downtown District. The group has coordinated six new murals in the past year, said the director of public art for the district, Thomas Agran. The recent additions included Iowa City Robot on the Field House by Ryan McGuire, a sailboat mural across from the Iowa City Public Library by Nick Meister, and Chris Vance’s abstract piece on the alley side of US Bank building, among others.

“Our organization has a priority to directly support and fortify the vibrant arts scene of Iowa City,” Agran said in an email to The Daily Iowan. “Supporting local artists and commissioning public work are essential to our mission. While a mural may lend the human touch and brighten our downtown, it might also have auxiliary effects on pedestrian traffic, safety, cleanliness, and support for our local businesses downtown.”

Perhaps the largest installation that was completed this year was Coexist, located on the side of Beadology and overlooking the US Bank parking lot. Designed by Sayuri Sasaki Hemann and United Action for Youth, the large mural was supported by several sponsors, including the Downtown District and the city of Iowa City. The effect of the mural was praised by Marcia Bollinger, the neighborhood outreach and public-art coordinator for the city.

“It has done so much for that space visually, really livened it up,” Bollinger said. “Public art reflects the community in terms of its interests and passion for culture. We respect and appreciate our environment and want to make it as stimulating as possible.”

The Public Art Program helps to create many public-art projects in addition to murals. Bollinger said the program has funded several statues in the Pedestrian Mall, the Literary Walk on Iowa Avenue, and performing-arts proposals. Even with all these projects, murals are still a large initiative for the program.

“Relative to sculpture, murals are not as expensive to produce,” Bollinger said. “They may not last as long, although frankly, we’ve had excellent luck with very little vandalism or graffiti. Usually if anything happens to them, it’s because the surface underneath is deteriorating. A lot of the murals have lasted for over a decade or more, and they can if they are installed properly.”

Local businesses have also contributed to the rise in murals around the city, one of the most recent installations located on the side of Hothouse Yoga. Completed three weeks ago, the piece features a large heart and the words “Practice Love.” Maureen Mondanaro, the owner of Hothouse Yoga, said the message was her motivation to have the mural created.

“I believe in the message,” Mondanaro said. “I think it creates a vibration that has a ripple effect which inspires goodness. It’s thought-provoking and community-building. It just brings us all together.”

Though the number of murals have increased greatly, there are still more to come. Agran said UI student Alexis Beucler is working on a piece in the alley of Wild Culture Kombucha and Up in Smoke on the North Side. Additionally, in collaboration with AJ Capital Partners and the Graduate, the Downtown District is funding an upcoming mural in the Pedestrian Mall corridor. The group is accepting proposals from artists for the project, which is planned to be painted on the side of the Graduate.