Oliver Martin could play an important role in Iowa’s offense if he gains eligibility in 2019. 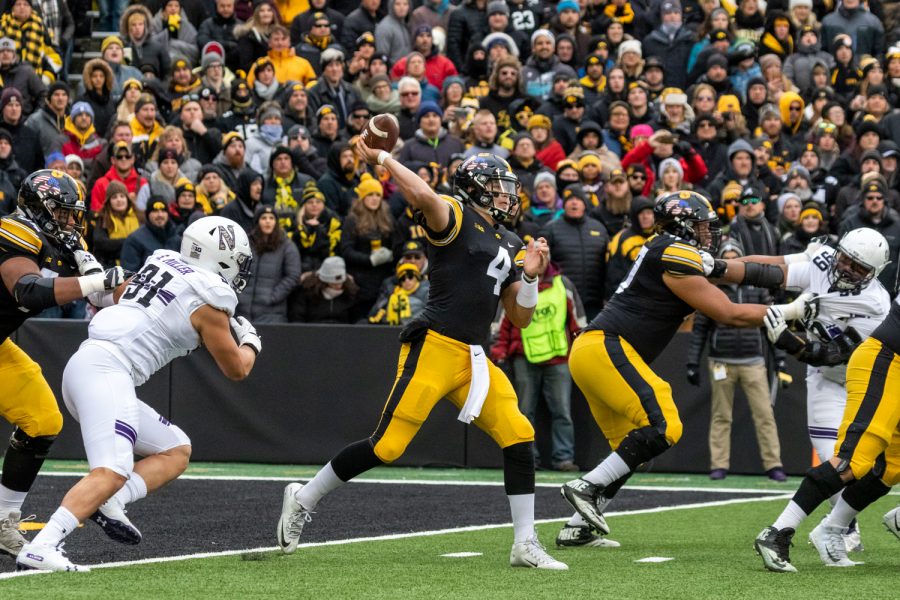 Iowa quarterback Nate Stanley (4) drops back to pass during a game against Northwestern University on Saturday, Nov. 10, 2018 at Kinnick Stadium in Iowa City. The Wildcats defeated the Hawkeyes 14-10.

Oliver Martin has only been at Iowa for a short time, but his effect has been noticeable.

Easley led Iowa with 52 receptions last season, serving as something of a security blanket for Stanley.

Now, Martin could be next in line if he’s eligible to play this coming season.

“[He’s] fast, has great hands,” Stanley said. “He reminds me a lot of Nick. Kind of same body type. Obviously, Nick had great production here, so maybe he can do something like that.”

Iowa doesn’t start 7-on-7 action until June 19, but Stanley has seen the attitude Martin brings off the field.

“He just has responded to the way that the coaches teach him,” Stanley said. “He’s very personable; he listens. He really wants to be the best that he can be, and he’s going to listen to whatever criticism and feedback that’s necessary for him to get there.”

After transferring from Michigan – where he hauled in 11 passes for 125 yards and a touchdown last season — Martin arrived back in his hometown at a good time.

Although spring ball has concluded, the Hawkeyes still have the rest of the summer as well as camp closer to the season.

Even though Martin already knows some of his teammates from high school and All-American games, his presence has still created a stir in Iowa’s facility.

“For me, when you see him the first time, it kind of made me feel like in high school when we got a new student because I know him,” offensive lineman Tristan Wirfs said. “In Iowa, there are all the small schools, so I know everybody. That’s kind of what it felt like — like we just got a new student at Mount Vernon or something.”

Top of the class

Nystrom had Epenesa going No. 2 overall to the Miami Dolphins, Jackson to the Minnesota Vikings at No. 20, and Wirfs at No. 27 to the Los Angeles Chargers.

But before players can get picked, they have to perform during the season.

“I’ve seen some of those things, and the first thing that comes to mind is that’s pretty cool — it’s a lifelong dream,” Epenesa said. “But whenever I really think about it, I try not to think too hard about it because I don’t want it to distract me from other things.”

The road to Indianapolis

Iowa hasn’t been to the Big Ten Championship Game since they capped off a 12-0 regular season in 2015. The Hawkeyes know that, and they want it to change.

This team, however, is a talented bunch.

Stanley enters his third year as a starter under center and the running game could improve with Mekhi Sargent running behind an offensive line with two potential first-round draft picks.

The defense boasts another likely first-rounder on the edge with a relatively stable corps at linebacker. It’s also experienced at cornerback.

That proven ability could lead to success.

“In a sense, it’s like an unspoken task — it doesn’t need to be said necessarily,” linebacker Kristian Welch said. “We want to play in Indianapolis.”