With the third-annual Downtown Block Party coming up, people will have more opportunities to interact with the arts. 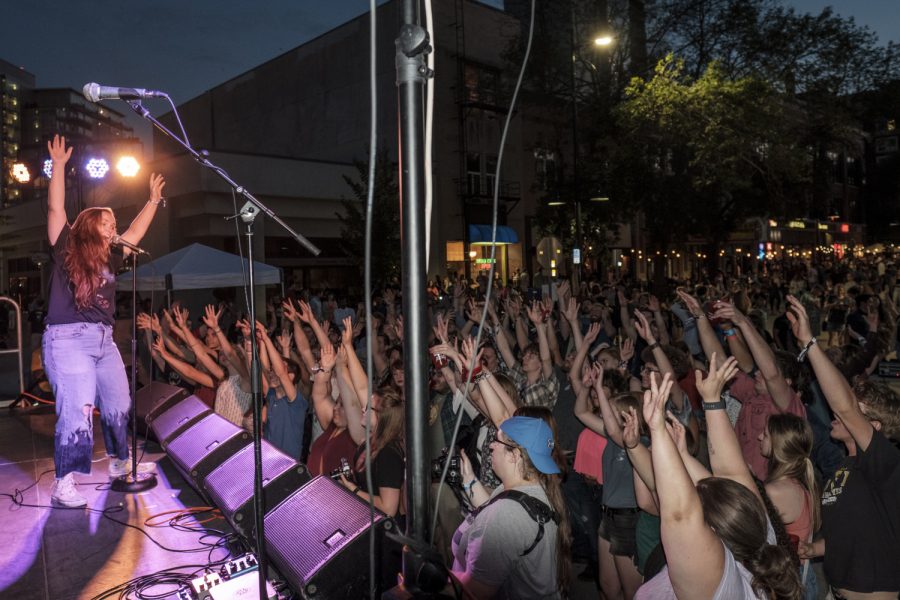 Partygoers dance to a performance by Flint Eastwood during the Iowa City Downtown District Block Party on Saturday June 23, 2018. The 2nd annual event during which open containers were allowed in a select portion of downtown attracted thousands of guests and featured a variety of activities and performances. (Nick Rohlman/The Daily Iowan)

As Downtown Iowa City gears up for the third-annual Downtown Block Party, local artists and musicians prepare to inspire people’s curiosity with special shows and pieces.

For this year’s Block Party, scheduled for June 22, the city has expand the event to all of Clinton Street, allowing for more activities and shows. Last year, 42,000 people showed up.

The Block Party will run 5-11 p.m. and is free. Tickets for a wristband and cup, which allow people to walk around with beer or wine, are $10 in advance, $11 the day of the festival.

Many events are making appearances once again, including the sand volleyball tournament, mini golf, tug of war tournament, and drag show. One staple, the Englert Live Music Stage, endeavors to bring a mix of faces and genres to the stage, Englert Executive Director Andre Perry said. The theater also tries to get both Iowa City natives and touring artists.

The Englert will feature a mashup of rock, garage, and soul this year with artists Elly h., the Mystery Lights, the Diplomats of Solid Sound, and Tristan. Perry said the staff members are proud of the lineup, and he thinks people will be open to hearing some new sounds.

“There are so many different sorts of events we book, and with this one, I think we have a crowd that’s excited to be out, and is really open, and maybe ready to try something they haven’t seen before, so we try to take advantage of that,” Perry said.

One artist, new to the Block Party, is going to dovetail music with his mind for a performance and Q&A session from 8:30-9:30 p.m. UI alum Jason Snell will employ technology to use his own brain waves to make music. This will be his fourth performance of the project.

“It’s like me doing telepathy with a synthesizer so I’m able to make music with my thoughts,” Snell said.

It’s important to have unique art such as this in the spotlight because it can give others inspiration, he said. Seeing art at festivals such as this when he was younger, he said, gave him the drive to create his own art.

The Stanley Museum of Art will invite people to make art of their own with an interactive mural made by artist Sayuri Sasaki Hemann.

Vero Rose Smith, an associate curator for the Legacies for Iowa Collections-Sharing Project at the Stanley Museum, said she reached out to Hemann to create the piece because she knew the latter’s work would mesh perfectly in a setting such as the Block Party.

“I know that Sayuri is so expert in creating these public experiences that are super-fun and interactive, so it all came together from that,” Smith said.

The piece is two backdrops inspired by works in the museum, with one side in colors of peaches, pinks, and reds, and the other in cobalt blues, avocado greens, and lemon yellows. People will be able to attach different pieces to the backdrop, including polka dots, different shapes, and feathers. There will also be a hat-decorating station. People can then take photos against the backdrop. Smith said it’s like a unique photo booth.

In the Stanley, people aren’t allowed to really interact with the pieces beyond looking at them, so the staff wanted to create something interactive that would draw people in.

“We wanted to do something where we have this element of co-creation so that it’s a continually visually evolving project that … provides an experience that we couldn’t provide in another way as an arts museum,” Smith said.

Having art experiences like these, Smith said, provides an opportunity for people who aren’t as interested in the more physical parts of the festival to get involved and have fun. Snell, Smith, and Perry all agreed that giving the arts a platform in public events benefits everyone.

“Arts experiences can really provide that opportunity for people to get out of their zones and hear, see, or do something they haven’t before,” Perry said.