With a depleted starting lineup, Joe Wieskamp should take on a new leadership role heading into his sophomore season. 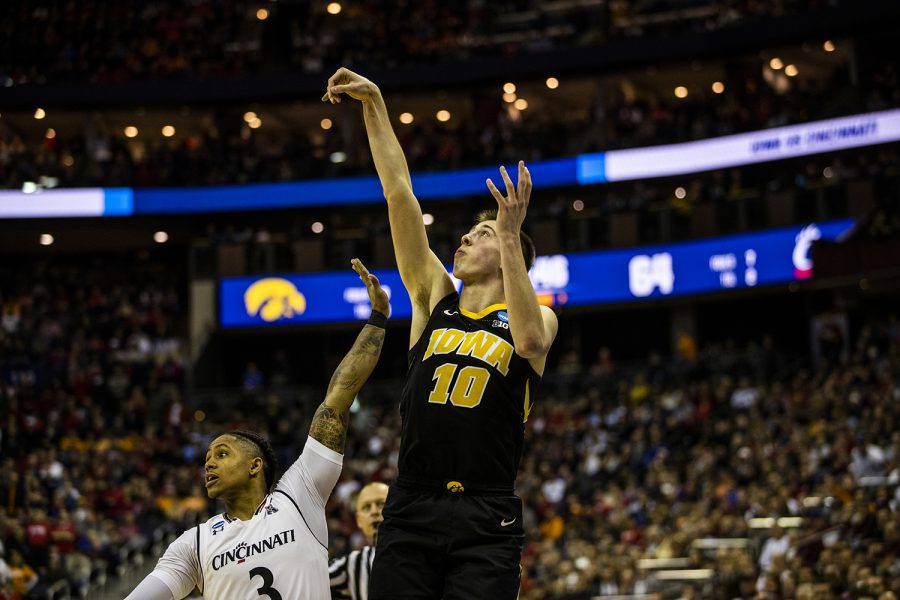 Iowa guard Joe Wieskamp shoots a three-pointer in the last couple minutes of the NCAA game against Cincinnati at Nationwide Arena on Friday, March 22, 2019. The Hawkeyes defeated the Bearcats 79-72.

Jan. 20 was not a good day for Illinois basketball head coach Brad Underwood.

He said he almost made himself sick during pregame warmups by watching Iowa freshman Joe Wieskamp drain shot after shot, finding the bottom of the net each time.

Wieskamp then proceeded to score 24 against the Illini that night, hitting all eight of his shots and all six of his 3-point attempts (plus 2-of-2 free throws) en route to a 95-71 Hawkeye win in Carver-Hawkeye.

Now, with two of Iowa’s starters from last season leaving the program and another questionable for the upcoming season, Wieskamp should get used to seeing more of the same.

Along with an expanded role on the floor, Wieskamp, who is known as a relatively soft-spoken player on the court, will face a new leadership role heading into his sophomore season.

“I’m going to definitely have to step up big time this year and be a leader,” he said. “A lot of guys know I’m not the most vocal guy; I kind of keep to myself, and kind of go into the gym, and do my thing. But I’m going to have to really expand myself, and just become more of a vocal leader this year, and take a big, strong lead.”

RELATED: Garza set to lead the way inside

A big positive for Wieskamp heading into 2019-20 will be knowing what he needs to improve on if he wants to take his game to the next level.

He decided to test the NBA Draft waters after a solid freshman campaign in which he averaged 11.1 points and 4.1 rebounds per game while shooting 42.4 percent from beyond the arc.

With meeting different team personnel and working out with different players, Wieskamp said he enjoyed the networking experience.

Hawkeye head coach Fran McCaffery noted two other players who went through the draft process before returning to Iowa — Tyler Cook and Peter Jok — grew a lot in terms of leadership.

If Wieskamp can find a way to harness that energy and make the team his own in a way, the Hawkeyes could be in for a productive season.

“I thought Pete’s senior year, he led the Big Ten in scoring, was an unbelievable leader for a very young team,” McCaffery said. “I thought Tyler was a completely different player last year than he was the year before. His numbers were still good, but from a leadership standpoint, from a confidence standpoint, he was substantially better. I expect the same from Joe.”

The leadership would serve Wieskamp well because if Jordan Bohannon can’t play next season, the team would be his, at least on the perimeter. Luka Garza holds down the inside.

Wieskamp will enter next season with 35 starts under his belt. Last season, he could rely on Cook, Garza, Bohannon, and (the now-departed for Kansas) Isaiah Moss to carry the load if his shot was off. He won’t have that same luxury in 2019-20.

His coach sees the shots coming as well.

“I felt like he was a guy that we went to, that he was confident; we just had other guys as well,” McCaffery said. “Without Jordan, without Tyler, stands to reason he might get a few more looks. But in terms of green light opportunities, he had as many last year as he’ll have this year.”