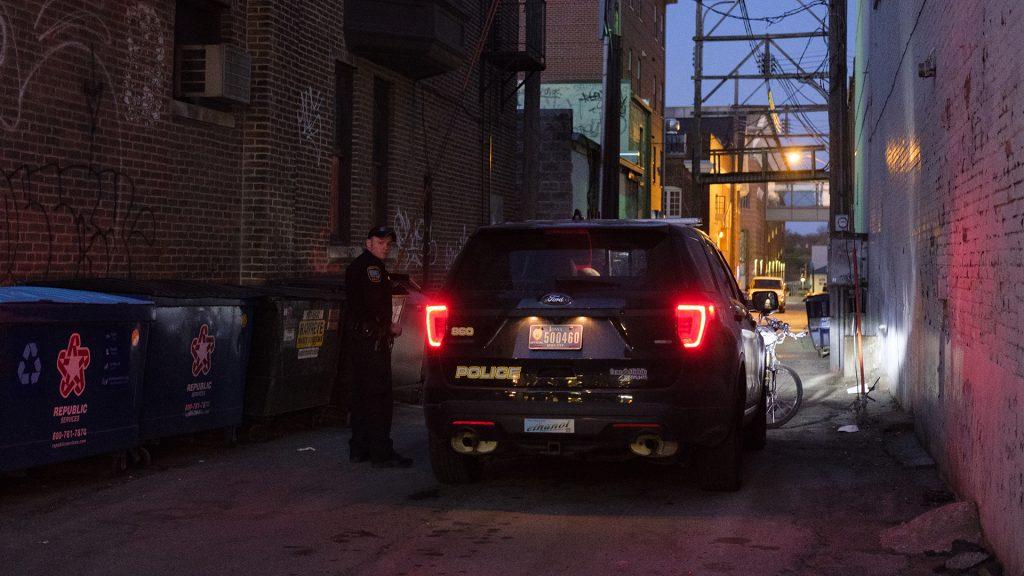 An Iowa City Police officer stands in an alley between Linn and Dubuque Street the night of Saturday April 23, 2017.

Johnson County County Attorney Janet Lyness has concluded that the Iowa City Police Department officers involved in a shooting May 9 “acted with reasonable force in defending themselves and others,” according to a press release from the Office of the Johnson County Attorney.

On the morning of May 9, Michael Cintron-Caceres ran from police officers after being stopped in the area of two burglaries, which the police were investigating. Cintron-Caceres reportedly jumped two fences into an enclosed lot owned by Big Ten Rentals, 1820 Boyrum St., then hid in a truck. When officers found Cintron-Caceres, he started a truck and used it to ram into vehicles and other equipment in the lot.

At the request of the police, the Iowa Division of Criminal Investigations conducted an probe into the incident, then submitted its findings to Lyness. Materials submitted included written reports of the officers; body-cam and surveillance footage; squad car audio; reports from the DCI agents; the total station diagram of the Big Ten Rentals lot; and interviews of Cintron-Caceres, Officer Alex Stricker and Officer Travis Neeld. She also physically viewed Big Ten Rentals’ lot the morning of May 9.

She used the findings to draw conclusions on whether the use of force was justified as reasonable.

“Based on the review of these materials, Lyness has concluded that Cintron-Caceres’ actions posed a clear risk to the life and safety of the police officers and that the ICPD officers used the level of force necessary to protect themselves, other officers, and the public from the threat posed by Cintron-Caceres,” the release said.

Cintron-Caceres was arrested May 14; he is charged with first-degree robbery, third-degree burglary and assault on peace officers unrelated to the incident on May 9, along with a forgery charge for allegedly forging a check on May 1.