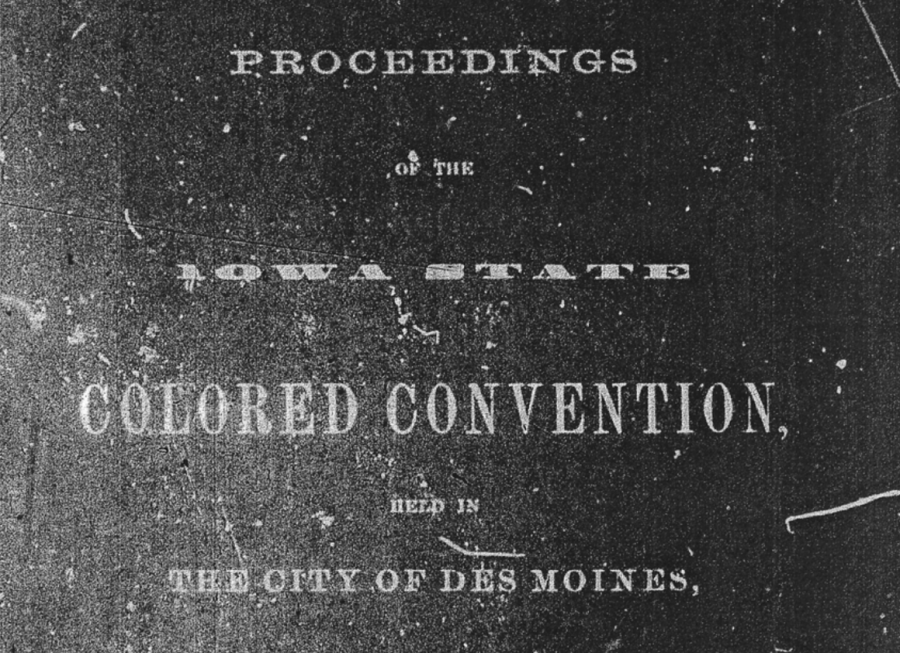 Proceedings for the Iowa State Colored Convention in 1868 were recorded in this text. (Contributed/coloredconventions.org)

The University of Iowa has played a crucial role in recovering lost history with a brand-new course.

Professor of history Leslie Schwalm, the chair of the UI Department of Gender, Women’s, and Sexuality Studies, co-directs the Iowa satellite of the nationwide effort Colored Conventions Project with Tom Keegan, the head of the Digital Scholarship and Publishing Studio at the UI Libraries.

The national project documents and uncovers lost information about collective organizing among African Americans from 1830, when the first political convention in this ongoing African American movement for civil rights was documented to the end of the century. The project collects sources such as printed speeches, proceedings, petitions, and newspaper articles and makes them available on ColoredConventions.org to piece together a previously forgotten part of American history.

Foreman visited the UI in November 2017 to deliver lectures and lead workshops at the Obermann Center for Advanced Studies. Schwalm said she was inspired by the lectures and workshops and, with a group of area professors from schools such as Grinnell College and Iowa State University, worked to form a satellite project in the state.

Casey, who is now a co-director, said that when the project started, only 12 national conventions and 45 state-level conventions were in print. After seven years, the project has uncovered at more than 200 conventions that took place all over North America from the 1830s to the end of the 19th century, and the staff suspect that twice that many exist.

“The most common reaction we get from both high-school students, undergrads, and many other historians is, ‘Why didn’t I know more about this history?’ ” Casey said.

Schwalm said researchers initially knew of three African American conventions in the state, but they have since discovered 10 more.

“We’re interested in recuperating this very rich history of black local activism in the 19th century in Iowa,” Schwalm said. “We’re interested in making that history accessible to K-12 history teachers and to provide them with the tools to incorporate this into their lesson plans.”

Foreman said the issues that African Americans of that time organized against — such as voter disenfranchisement and school segregation — resonate deeply in today’s climate. Voter suppression and access to quality public education are two examples of issues that are as important today as they were more than a century ago.

“To uncover the records that reveal this hidden history, it’s extraordinarily important for the project to partner with satellite projects that are stationed in places where these conferences took place,” Foreman said.

More than 2,500 students across North America from a wide variety of majors have contributed to the project, Foreman said. One exciting feature of the project is that it works across disciplines, with librarians as well as scholars and students, in its use of data visualization to help tell the story of the obscured movement.

“It’s not just for history students,” Casey said. “We’ve had students in just about every major you can think of.”

The project is about to launch on a curriculum focused on seventh- to 12th-graders to prime them on the part of history before they reach college.