Trump in Des Moines: ‘You will be the ones to shape America’s future’

U.S. President Trump spoke at the Ron Pearson Center in Des Moines at an Iowa GOP dinner on Tuesday, where he championed his 2016 victory in Iowa and touted his efforts to boost agriculture. 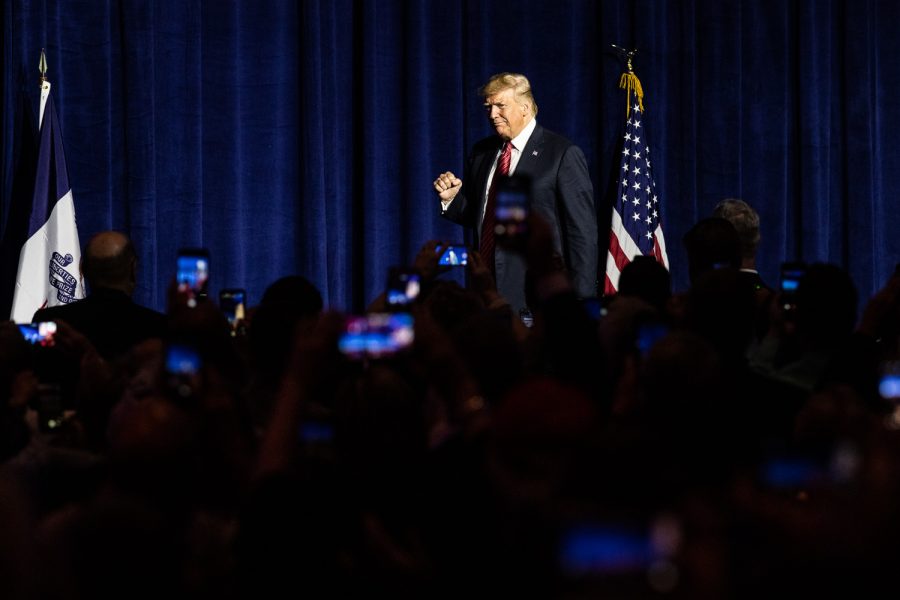 To a crowd of around 700 Iowa Republicans in the Ron Pearson Center, Trump opened his speech touting his administration’s approval of year-round ethanol and reforming a trade deal with Canada and Mexico, known as the United States-Mexico-Canada Agreement.

This comes after claims Trump made via Twitter, saying Mexico agreed to purchase large amounts of agricultural products from the U.S. Mexican officials said they had no knowledge of a major farm deal, according to several media outlets.

Before traveling to Des Moines, Trump was in Council Bluffs, where he spoke largely about renewable energy and the newly accessible year-round ethanol. E15, or gasoline with 15 percent ethanol, is made with corn and is widely championed in Iowa for its economic benefits.

Trump championed his 2016 victory in Iowa and vowed to “keep Iowa first” ahead of the state’s first-in-the-nation caucuses in February 2020. Trump called the Iowa caucuses a great tradition.

“… and in 2020, Iowa will once again be at the center of the action,” Trump said. “And right here in the Heartland State, in backyards, and living rooms, and town halls, and fairgrounds, and diners, and coffee shops all across the state — you will be the ones to shape America’s future.”

In terms of success, Trump pointed to the job market and said that since the election, there has been 6 million new jobs and 7 million Americans lifted off food stamps. He said unemployment is at a 50-year low.

The number of individuals receiving SNAP benefits from 2016 to 2018 has only slightly decreased.

Iowa Rep. Bobby Kaufmann, R-Wilton, commended Trump in a speech at the beginning of the event. Kaufmann said that as the only elected Republican in mostly-blue Johnson County, he is “living proof” that Republicans can win in traditionally Democratic areas, such as Iowa’s 2nd Congressional District.

Kaufmann also “thanked Trump” for bills and executive orders he signed, such as an executive order to ensure campus free speech after concerns that college campuses are becoming too liberal.

Gov. Kim Reynolds signed a similar bill in Iowa this past legislative session.

“The proposals coming from [Democratic candidates] are extreme,” Lundgren said but did not specify the proposals. “It ain’t free, and it will fall on the backs of hard-working American families.”