Two statues, depicting Tibbetts with children and tripping over her dog’s leash, have been placed in Grinnell to honor her life. 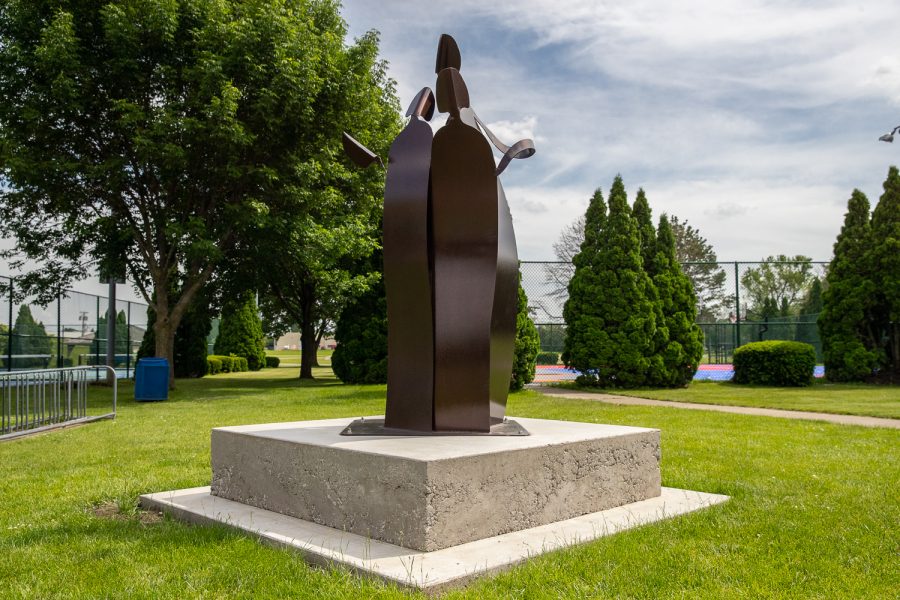 A statue dedicated to UI student Mollie Tibbetts is seen at Ahrens Park in Grinnell, Iowa on June 6, 2019. The statue created by Dubuque artist Gail Chavenelle was installed May 18, 2019.

For many who knew her, Mollie Tibbetts was a funny, creative woman. For children at the day camp where she worked, Tibbetts was a warm and comforting presence. Two statues recently erected in Grinnell honor her life and commemorate her personality.

The metal statues are another way for people to honor her life, said Chad Nath, a day camp manager who worked with Tibbetts.

“I knew that we wanted to do something to honor Mollie’s life, and that’s how this came about,” Nath said.

Tibbetts, a University of Iowa student, disappeared while on a jog in her hometown of Brooklyn, Iowa, on July 18, 2018, and was found dead Aug. 21. In the months since her death, people have honored her life in many different ways, including creating the Mollie Tibbetts Memorial Fund Child and Adolescent Psychiatry at the UI Stead Family Children’s Hospital.

Tibbetts worked at the UnityPoint Grinnell Regional Medical Center day camp for two summers. Nath said she was great with the kids.

“For children who have anxiety coming in to a child-care setting for the first time … she was very settling to them,” Nath said.

One of the statues, located in Ahrens Park, depicts Tibbetts in an embrace with children. Nath said the statue shows how important the kids were to Mollie and how happy she was.

The second statue, located in the Grinnell Hospital’s healing garden, shows Tibbetts getting tangled in the leash of her dog, Buster. Tibbetts’ family wanted the statues to show who Mollie really was, and Dubuque artist Gail Chavenelle said the statues reflect her playfulness.

“It brings out her silliness … How fun she was,” Nath said.

Chavenelle was approached by the family to make the pieces. She met with the Tibbetts family and worked with them and Nath on the design. The process took around five months, she said.

The Tibbetts family showed Chavenelle pictures and home videos to help her get a sense of who Tibbetts was beyond what the public already knows about her.

“[In a video] she would be getting an award or be speaking, then she would do a funny dance coming off the stage,” Chavenelle said. “That’s what they wanted to capture and remember.”

Chavenelle said the project was more than just a commission for her, and it was amazing to work with the family.

“I was honored to … try to capture in a visual form what the family wanted us to remember about Mollie,” she said.

The statues were unveiled May 18 to Tibbetts’ family, friends, and day camp co-workers, according to a press release. Attendees signed teal ribbons and presented them to the family, along with four replica statues. Teal was Tibbetts’ favorite color.

“The sculptures and dedication ceremonies were made possible by the generosity of local donors,” the press release stated.

Nath said the statues serve to help people remember who Tibbetts was and honor her life, not her death.

“It’s a reminder to the community that there are people out there who bring joy and happiness and light … we need to honor them when they’re here and when they’re not here,“ he said.