With a three-game set against Michigan State coming up, Iowa needs to stay focused to reach its postseason goals. 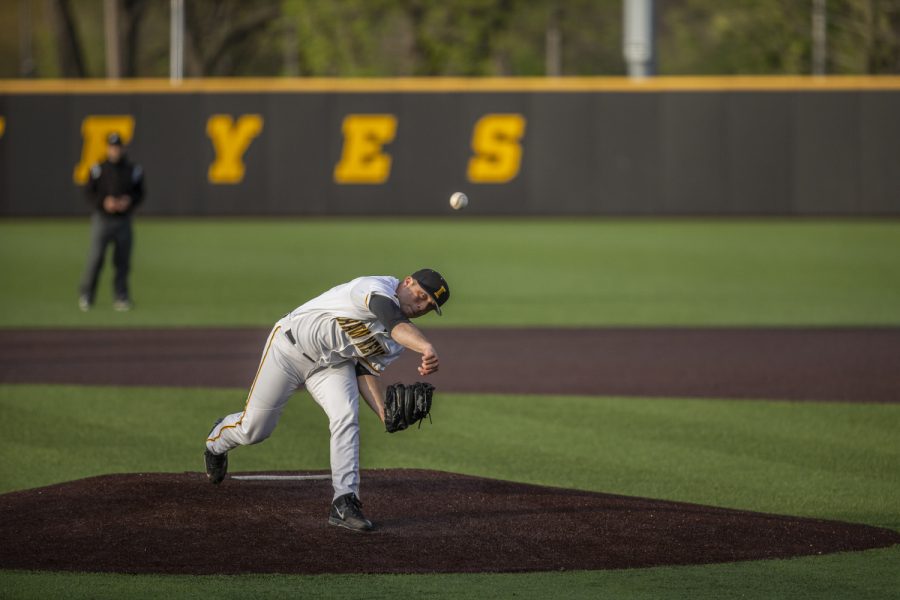 University of Iowa Pitcher Cole McDonald pitches during the baseball game at Duane Banks Stadium on Friday, May 3, 2019. The Hawkeyes beat the Eaters 6-3.

At this point last season, Iowa baseball fell into a slump when it needed wins to make the NCAA Tournament.

Now, the Hawkeyes have been included in the 64-team field in the latest predictions from Baseball America and D1Baseball.

Baseball America put Iowa as the No. 3 seed in the four-team Waco Regional, along with Baylor, Missouri, and Stony Brook. D1Baseball also has the Hawkeyes as a No. 3 seed, but in Greenville with host East Carolina, North Carolina State, and Campbell.

But to get to any of those regionals, Iowa first has to hold its own in a three-game set against Michigan State starting today at Banks Field.

“We know that we don’t have much leeway with RPI to potentially lose a game against Michigan State or Western Illinois,” Iowa Friday starter Cole McDonald said. “We just need to go out and play the way we know we can, and if we lose that way, then so be it. But it’s not going to be the opposite where we’re losing focus.”

Michigan State sits at No. 12 in the Big Ten standings with only five wins in the conference, but the Spartans have pulled off a new level of play recently.

Michigan State has won seven of its last 10 games, including two Big Ten series over Purdue and Northwestern.

Before taking those two series, the Spartans hadn’t won a Big Ten weekend series. Now, they’re a team that could pose a threat to the postseason hopes of conference foes.

“Michigan State’s a team that played a really tough season early and for whatever reason, they struggled. But they do have older guys; it’s not like they have a bunch of young guys.”

Unfortunately for the Hawkeyes, they have spent five days without a game and have had finals interspersed throughout the week, making the practice schedule more chaotic than usual.

Iowa is, however, coming off an impressive series against then-No. 25 Cal-Irvine, taking two games from the Anteaters.

The Hawkeyes stepped up in all phases of their two victories. On May 3, Izaya Fullard stepped up to club 2 bombs against Anteater starter Andre Pallante, who entered the series with a 2.62 ERA and only 5 home runs allowed.

Then the pitching took the spotlight in a 1-0 victory on May 4. Cam Baumann tossed five scoreless innings before Jason Foster took the baton for two of his own. Hawkeye closer Grant Leonard, who has been consistent all season, followed with six outs to close the door on a Cal-Irvine comeback.

If Iowa hopes to keep its name in the postseason conversation, a similar performance would be welcomed.

“Obviously, we got to take care of our business to reach our goals,” Fullard said. “Especially with finals week — we just really got to stay focused [and] get our work in. I think if we can do that, the play will take care of itself.”