For graduating senior Jack Feng, the experience he has gained at the UI can only be outmaneuvered by the friends and memories he has made. 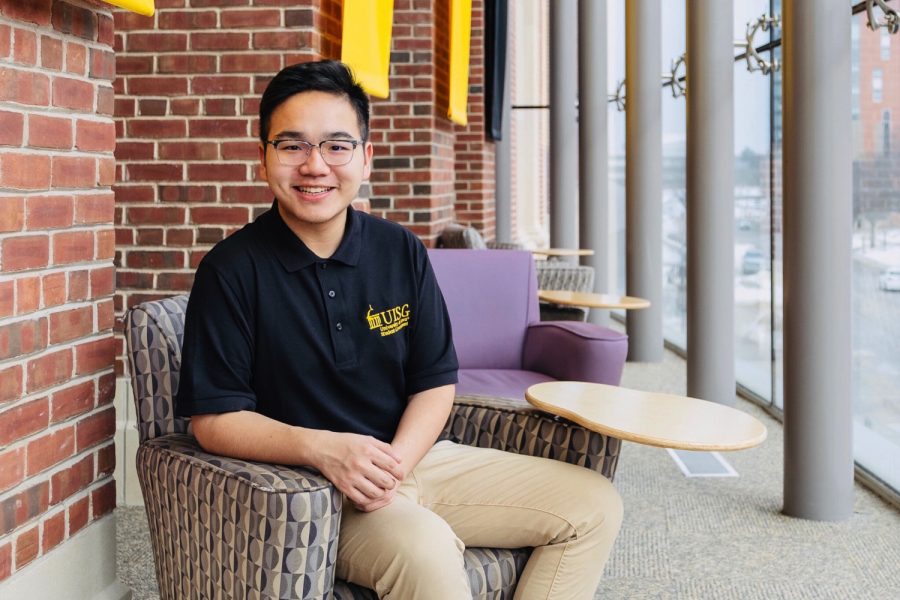 Although Lanzhou, China, is about as far away from Iowa City as a person can travel — 6,975 miles, to be exact — that distance did not stop graduating senior Zhiting “Jack” Feng from traveling to the UI to study biochemistry and ethics & public policy (along with a minor in chemistry and certificate in clinical & translational science).

With graduation mere days away and a few months left before starting a master’s degree at the Johns Hopkins Bloomberg School of Public Health, Feng said a simple reason brought him to the UI.

“I have been interested in health sciences since high school, and I chose to come to the university because of its incredible academic reputation,” he said. “Not only did they have the tools I needed to succeed but an excellent curriculum in health sciences.”

The program, he said, allowed him to work as an intern for Integrated Testing Services Program, where he delivered HIV screening services to the community. He also helped the services’ community-need assessment.

“From this experience, I learned a lot more about the human side of public health and the importance of resource allocation and data utilization to determine barriers to care in underserved communities,” he said.

Feng said he was also able to travel to Mexico with a team from the Colleges of Dentistry and of Public Health to learn about the obesity epidemic.

“Jack is a very motivated person,” Campillo-Alvarado said. “When he joined the research group, I found he was a dedicated student and his energy was contagious. Even when the work became overwhelming, he was never afraid to learn new concepts and apply them.”

Along with Feng’s engagement in the classroom and commitment to academics, he has also served as a UI Student Government senator on the Student Life and Health & Safety Committees. Former UISG President Hira Mustafa said she has long been impressed with Feng’s proclivity to go above and beyond what is asked of him.

“If Jack says ‘yes’ to being part of something, he puts forth his best effort every day to make that something the best it can be,” Mustafa said. “For UISG, this meant he would make posts about how he voted on bills to educate students on legislation and be transparent about his beliefs.”

This advocacy, Mustafa said, is not limited to the confines of student government.

“He has been a fierce advocate for others both inside and outside of UISG,” she said. “You can always count on him to have your back and celebrate your successes with you. He gives everyone so much love, and Iowa is better because he has been here.”

Looking back on his soon-to-be finished undergraduate UI career, Feng said there were challenging and incredibly taxing moments. Overall, however, he said the memories and friends he has made at the UI are irreplaceable.

“I think in general, the people that I have built connections with are so caring and willing to help,” he said. “Learning about American values, culture, and social norms has been a rewarding process … and something I will never forget.”