On the heels of a second national title, Spencer Lee picked up The Daily Iowan’s Male Athlete of the Year Award. 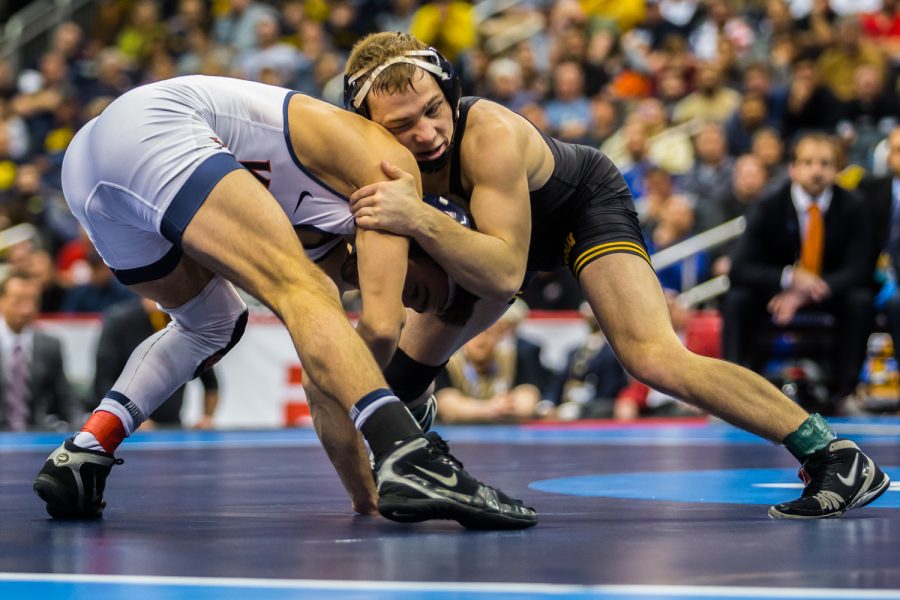 The Hawkeye went 23-3 during the course of the year, falling to Northwestern’s Sebastian Rivera twice and Oklahoma State’s Nick Piccininni once.

Lee went into Midlands Championships 5-0, finishing four matches with technical falls. But the Hawkeye was upset, 7-3, by Rivera and had to settle for second place.

The loss drove Lee to treat each match as the biggest one.

“Spencer, his mindset is a lot different,” 165-pounder Alex Marinelli said after Midlands. “He approaches matches a lot different. He treats each match like it’s the biggest one now — not that he didn’t do that before, but it’s more evident now. In practice, he wants to get better, and he knows that he can.”

Following this loss, Lee went on an eight-match winning streak, with 5 pins. But then, Hawkeye fans were shocked again. The 2018 national champion was pinned by Piccininni in Iowa’s last dual meet of the season.

It was the first time Lee had been pinned since he was 9. There was no time to dwell on the loss, because the Hawkeye had to get ready for the Big Tens.

“I remember losing to Oklahoma State and freaking,” Lee said after his national championship match. “I had the whole team grab me and telling me they loved me, and we were a family, and we’re going to be in this together. And I know that moment there is when I got to move on. I’ve got to be the better version of myself.”

Lee pinned Indiana’s Elijah Oliver in the first period of his first match at Big Tens, then went on to defeat Minnesota’s Sean Russell, 8-0, to earn himself a rematch with Rivera.

Rivera was victorious in the rematch, turning a Lee shot into a takedown in sudden victory. Following the loss, Iowa head coach Tom Brands said Lee needed to focus on wrestling his match his style.

“Spencer scores a takedown in the third period, it’s over,” Brands said. “When I say ‘over,’ I don’t mean the clock would stop, and he’d get his hand raised. I’m talking about if he scores a takedown in the third period, we don’t have to do all the hands-to-the-face stuff and the things that derailed us. We just have to wrestle our match, and Spencer knows that, and when he wrestles his match, he’s dynamite.”

That was Lee’s last loss of the season. After facing three tough losses throughout his sophomore season, he finished on top when it counted most.

Throughout the NCAAs, he dominated his weight class, outscoring opponents, 55-7, while never trailing. He finished the year scoring bonus points in 19 of his 23 wins with 8 pins and 7 technical falls.

Although he is still on track to becoming Iowa’s first-ever four-time national champ, Lee plans to focus on the next thing in front of him: summer wrestling.

“I’m focused on what’s next,” he said after winning his second national title. “That’s going to be summer wrestling, and we’ll see how that goes. And [I] got to get healthy and everything, whatever, you know how it is. Big-time big national tournament, everyone’s a little tweaked up, getting ready to finish the summer off strong.

“Can’t worry about being a four-time national champ because you can’t win four if you don’t win three, and I haven’t won three yet.”