Izaya Fullard has been on a tear recently, all while boasting one of the best nicknames in Iowa sports. 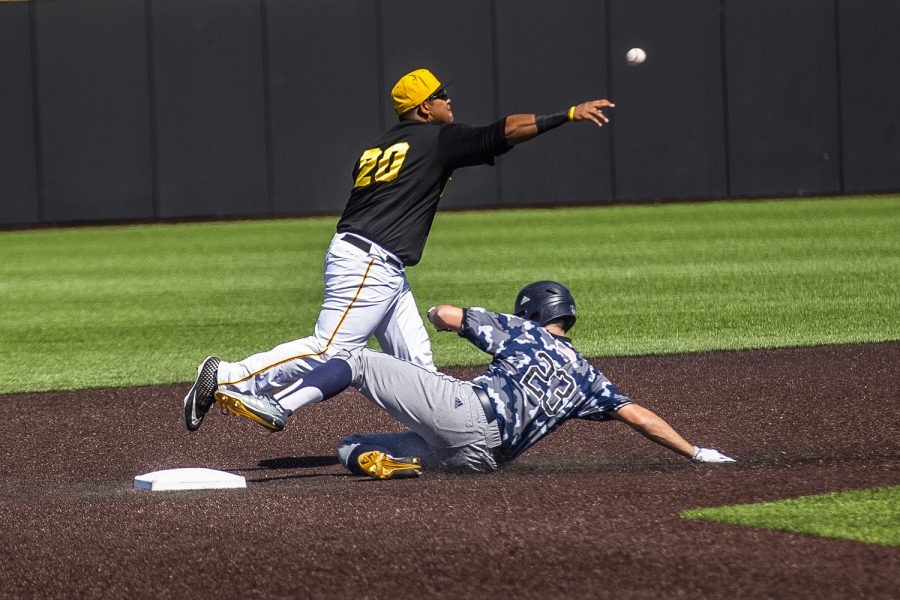 Iowa infielder Izaya Fullard throws the ball to first as UC Irvine infielder Brandon Lewis slides into the base during the game against UC Irvine at Duane Banks Field on Saturday, May 4, 2019. The Hawkeyes defeated the Anteaters 1-0.

Izaya Fullard has been on such a roll with his bat in recent weeks that it’s hard to remember he also boasts one of the best nicknames in Hawkeye sports.

Fullard goes by “Meat Patty,” and whether he likes it or not, it’s going to keep happening.

“It came from my roommate [Lorenzo Elion],” Fullard said. “I got a haircut one time, and I guess he said my head looked like a meat patty. It kind of stuck. The team loved it, and I guess even the coaches started to like it.”

The nickname even spread to the team’s higher-ups. Hawkeye head coach Rick Heller, who recently collected his 200th win at the helm of the Hawkeyes, is prone to use the nickname from time to time.

“It’s a groovy nickname,” Heller said and laughed. “There are nicknames every year, but that one’s something … That’s all they call him, so it just catches on. I don’t call him Meat Patty; I just call him Patty.”

The nickname, however, also describes Fullard’s play on the field. Sometimes opposing pitchers bite off more than they can chew, and that’s exactly what happened on May 3.

By the end of the series on Sunday, Fullard had raised his batting average to the .300 mark. He doesn’t slump often. He has only been held hitless eight times in 43 games this season.

Fullard also ranks second on the team with 5 home runs, flashing Jake Adams-like power at times. Of course, he’s not there yet. Few are. But with the tools he possesses, the sophomore will be a weapon for the Hawkeyes for years to come.

“He’s really stepped in and filled a void left from the guys last year in the middle of the lineup,” Heller said. “The real positive thing is that we knew Izaya was a really good hitter, but his power, the pull-side power, is starting to blossom, and that’s a good sign not just for this year but for next year.”

In addition to his prowess at the plate, Fullard has displayed his versatility in the field. He started at second base on May 4 after Mitchell Boe’s injury, and he could continue to see time there.

Given Boe’s ability as one of the best defensive second basemen in the conference, whoever steps up, whether it’s Fullard or freshman Brendan Sher, will have big shoes to fill.

While the situation at second base might throw some for a loop, Iowa can still count on something consistent: Fullard’s bat.

With two regular-season series remaining, against Michigan State and Maryland, the Hawkeyes need to hold the position they have for an at-large bid to the NCAA Tournament.

Fullard is intent on keeping his streak going.

“Batting average is something you can’t control,” Fullard said. “All you can control is that you put a good swing on it, swing at good pitches, and the rest kind of takes care of itself.”