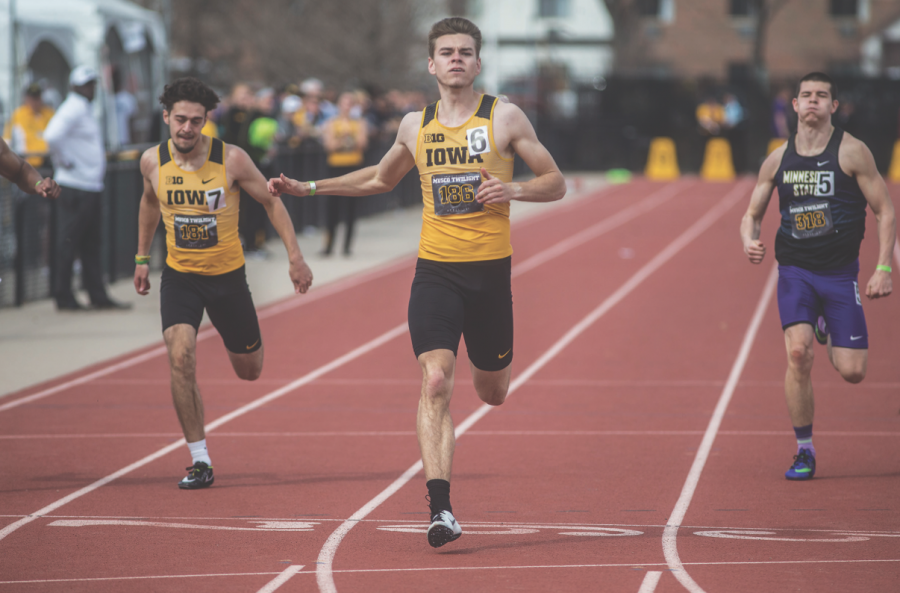 Iowa’s Chris Douglas finishes first in the 200 meters during the 19th-annual Musco Twilight meet at the Cretzmeyer Track on April 12, 2018.

Iowa track and field has prepared the entire season to get to this moment. The Big Ten Outdoor Championships are rapidly approaching, and they will be run in the Hawkeyes’ backyard, the Cretzmeyer Track.

Both the Iowa men and women will seek to bring home conference crowns this weekend, and they will have a strong crowd full of Black and Gold behind them to cheer them on.

The large crowd will be a key aspect for the Hawkeyes, and it will also be unique compared with a typical outdoor season.

“In the past years, we’ve only had indoor meets and the Musco Twilight, which Musco is arguably not a huge meet, so having something like the Big Ten Championships here at home will be great,” hurdler Chris Douglas said. “We’ll have everyone who’s an Iowa fan out there cheering for us, so it will be good to have some energy behind us that we don’t usually have. I’m really looking forward to it.”

Iowa has experienced electric atmospheres this season, but this weekend, things are expected to go to an entirely different level. In particular Jaylan McConico, who in his first year competing for Iowa after transferring from Illinois State, anticipates the big stage and hopes it will give him a boost.

“It’s going to be a really good experience,” McConico said. “The Big Ten is a Power 5 conference, and I’m coming from the [Missouri Valley Conference] so it’s a completely new atmosphere, but I’m really looking forward to it. I love going up against the great competition, because I feel like it just elevates my own performance.”

Going in as the favorites

Both the men’s and women’s teams are ranked toward the top of the Big Ten, according to the coaches’ poll. The men are ranked first in the conference ahead of Nebraska and Purdue, and the women occupy the No. 2 spot behind Ohio State and ahead of Minnesota.

Being the hunted rather than the hunter is a slightly different position than the Hawkeyes are accustomed to, but Director of Track and Field Joey Woody wants his athletes to maintain the same mindset as usual.

“We always want to go into every season and every competition being one of the best teams in the conference,” Woody said. “That is why we’re here: to compete for championships. We definitely feel confident about where we are at right now, and we expect to be one of the top teams in the country as well. That doesn’t change from where our mindset has always been; we’re trying to beat everybody.”

Middle-distance runner Taylor Arco shares Woody’s mindset, and she is ready to take the track with what she believes to be one of the best squads Iowa has had in recent memory.

“I think this is the strongest team we’ve had in a few years,” Arco said. “We just have a lot of depth in all of the events. I think we have one or two people that could score in every event, and that’s awesome.”

McConico has been in the spotlight all season long for Iowa track. As a Big Ten champion in the indoor 60-meter hurdles, he has fielded questions all season long, but in preparation for outdoor championships, he asked a question of his own.

With a piece of paper in his hands that displayed a picture of Woody celebrating after the men’s team won the conference championship on the home track in 2011, McConico asked his head coach what was going through his mind at that moment.

“That moment right there, that was like we had finally accomplished everything we had been setting our minds to for a long time,” Woody said. “I started here in 2006, and this was five years after that, and now I’ve been the head coach for the last five years, so I’m hoping to have that kind of feeling again.”