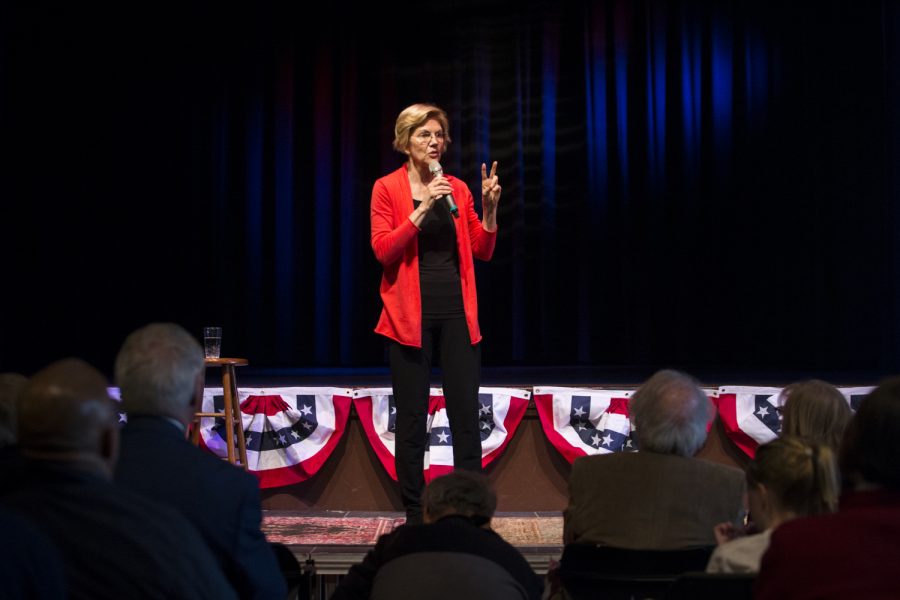 Tongue wagging in the 70-degree heat, Calvin the corgi bounced along a nature trail alongside owner Sam Franks. The two were hiking in Crandic Park with a Sen. Elizabeth Warren campaign staffer and four others — a mix of recent college graduates and current UI students.

Three days later, separate Warren organizers opened a box of Dunkin’ doughnuts and poured coffee on a pop-up table designed to interact with students passing by on their way to finals and group-study sessions. Close by, a sign-up card and pen waited for students to record their contact information and comment on their political beliefs.

These local campaign events, sans the candidate, are part of Warren’s early sprawling Iowa caucuses field operation. Warren organizers are settling in deeper and earlier than any other campaign staffs on college campuses so far.

Those early connections may pay dividends closer to the caucuses, as students may be more willing to volunteer for the campaign or commit to caucusing for Warren if they know someone from the campaign, said former Iowa political columnist David Yepsen.

He said it’s important for Warren to organize early because she has less name recognition off-the-bat in Iowa than hopefuls who have already campaigned in the state, such as Sen. Bernie Sanders and former Vice President Joe Biden.

“It’s smart that she’s doing field work because it’s still early, you can make an impression,” Yepsen said. “And come fall, geez, you’re going to be really crowded there, like a political traffic jam.”

Warren has more than 50 staffers in Iowa, including 30 on the organizing team.

Near-campus events range from the free-doughnut pop-up to a coffee-shop talk to grabbing a beer and organizing at a bar downtown, Joe’s Place. Contact information and feedback collected there helps staffers follow up with attendees and plan future events.

“Something like this [the hike] you see a fluctuation of both conversations about, you know, the student loan-debt crisis but also talking about things like ‘Game of Thrones’ and just random stuff like that, because people have interests beyond politics,” Alicea said.

Those who attend the Iowa caucuses have to vote physically, standing in a designated spot in a gym, living room, or other venue. The caucusing process often takes several hours, requiring more of a commitment than voting, Yepsen said, which is why campaigns try to make personal connections.

UI student Omar Lopez went to a Warren event at Joe’s Place by himself, looking for someone to talk with. He’d seen Democratic presidential-nomination candidates Andrew Yang and Beto O’Rourke when they visited campus, but said he preferred a more relaxed venue where he could talk with someone over a drink.

Now, he’s committed to Warren, and he continues to attend events while working three jobs and taking a full class load.

UI junior Austin Wu, who is leaning toward supporting Warren, said he saw Warren campaign organizers at a rally to protest the UI cutting funding from the Labor Center.

Brit Bender, the state director of NextGen, a Democratic young-voter-centered organization, said that in research since 2014, staffers found that certain issues, such as education, and organizing early will propel students to be engaged in the political process.

“If you engage and organize young people early, they’ll vote,” Bender said. “If you talk to people where they are, quite literally, by being on the ground with them or reaching out to them digitally … you can turn them out more easily and continue to make voting accessible to students.”

Other campaigns have hosted events on college campus events as well.

Campaign staffers for Sen. Kamala Harris, D-Calif., hosted training sessions at several colleges in Iowa called “Camp Kamala” in which students learned about the Harris campaign and the caucus process in Iowa.

The campaign of Sen. Cory Booker, D-N.J., who has the second largest campaign operation next to Warren, hired four former NextGen activists as campaign leaders.

But in interviews with campus activists across the state, Warren’s campaign has embedded furthest so far in college campuses.

Most candidates have visited Iowa City this spring, including a trip by Warren herself to the IMU. On May 3, she visited the Memorial Union at Iowa State University, where she announced an online student-debt-calculator for people to calculate how much student debt would be canceled under her proposed policy.

Having a large Iowa staff, however, doesn’t guarantee success, Yepsen said, and it could come at a cost. From Jan. 1 through March 31, Warren raised $6 million and spent $5.2 million, a burn rate higher than other top-tier candidates. However, she did have nearly $11.2 million in cash on hand going into the next reporting period. The extra funds were boosted by transfers from her U.S. Senate campaign.

“Your candidate has to manage their resources, and should fundraising dip for any reason, that can really be a burden,” Yepsen said. “It’s not good to be laying off staff. It doesn’t look good.”

Taylor Blair, the outgoing president of Iowa State College Democrats, said he believed in-person conversations and meeting with staff will be vital to attracting student support because of how large the field is.

“Obviously, it’s a little bit of a gamble on her part, but I think it’s like what else are you going to spend money on, you know, besides putting people on the ground to make the case for you?” Blair said.