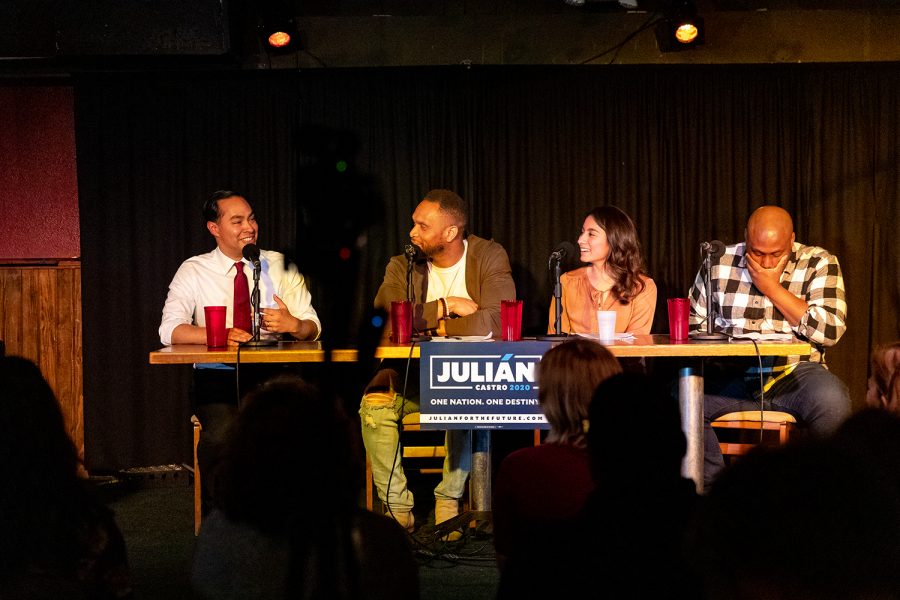 Julian Castro, former Secretary of Housing and Urban Development and current Democratic candidate for president appears on the Political Party Live podcast at The Mill on Sunday, Apr. 14, 2019.

In contrast to the stump speeches and loud crowds at traditional presidential-campaign rallies, a unique type of political event is emerging for Democratic presidential-nomination hopefuls attempting to spread their messages across Iowa. More and more candidates are opting to join the hosts of the Iowa-based podcast “Political Party Live” for a recorded conversation in front of a live audience.

Sen. Kamala Harris, D-Calif., was the first candidate to kick-start the trend of appearing on the podcast on Feb. 24. Since then, former Rep. of Texas Beto O’Rourke, former Secretary of Housing and Urban Development Julián Castro, and entrepreneur Andrew Yang have joined the podcast in the last several months.

“Political Party Live” host and Linn County Supervisor Stacey Walker said the podcast began in 2016 as a way to draw in younger generations on topics such as politics, culture, and current events.

The unique atmosphere of the live podcast recordings helps the audience to see candidates in a more casual, conversational setting, he said.

The podcast’s Twitter has approximately 400 followers and 1,400 likes on Facebook in contrast to national-media outlets such as CNN, which has 31 million Facebook likes. CNN has hosted several televised town halls with Democratic presidential-nomination hopefuls. However, candidates still choose to appear on the podcast, which offers a nontraditional event format a chance to connect with local Iowa media.

The recent interviews with presidential candidates have significantly boosted the podcast’s audience, Walker said, and helped it to gain fame in the Iowa political sphere.

The liberal-leaning podcast, which is funded primarily by private donors, features hosts from a range of disciplines. Walker is the only involved elected official, although podcast host and Yotopia owner Veronica Tessler considered a run for Congress before withdrawing her name as a candidate last week.

“We have these various backgrounds that span arts, culture, entertainment, politics, and activism,” Walker said. “So we’re trying to fuse all of that together to create interesting programming to keep young folks engaged in the issues that matter.”

Miryam Lipper, the Iowa communications director for Harris, said the campaign connected with the podcast in part because it reaches a young, progressive audience in the Cedar Rapids area.

“It was a great experience — the audience was able to ask questions along with the hosts,” Lipper said. “And it gave Sen. Harris an opportunity to not only talk about her vision for Iowa but also to hear directly from Iowans in the room about the issues that were at the top of their minds.”

Cynthia Sebian-Lander, the Iowa state director for the Castro campaign, said his session with the podcast focused largely on his immigration policy plans and opinions on current immigration-related issues in the U.S.

“People were really engaged and wanted to talk about policy on housing, and health care, and student debt,” she said. “Folks were really interested in the conversation, and I know [Castro] really appreciated everyone spending Sunday evening with him at the Mill.”