The Daily Iowan • May 7, 2019 • https://dailyiowan.com/2019/05/07/international-writing-program-director-merrill-reflects-on-guggenheim-fellowship-childhood-dreams/

For Christopher Merrill, the director of the International Writing Program at the University of Iowa, the Hawkeye State was the final stop in a globetrotting career. 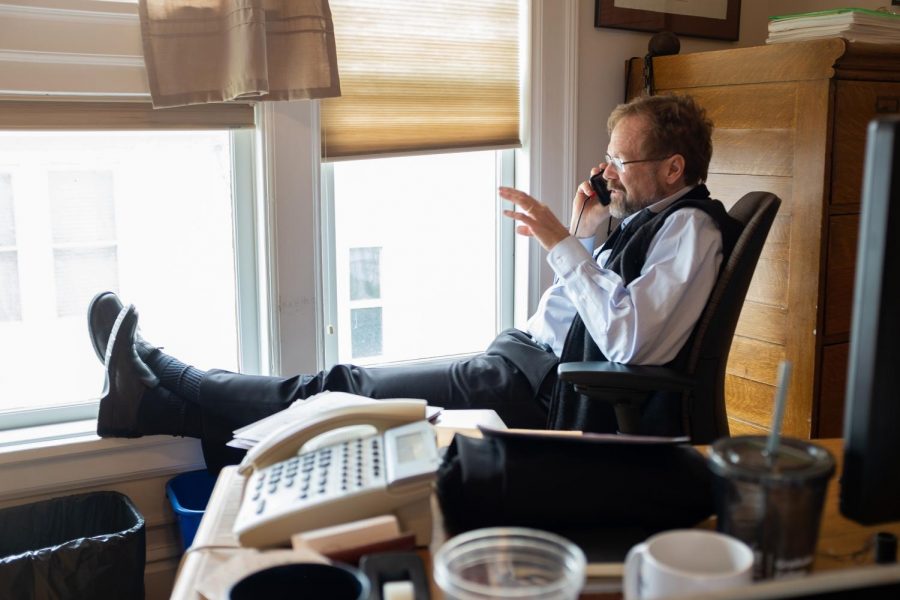 Christopher Merrill, the director of the International Writing Program, makes a phone call at his desk on April 12. Merrill’s career began with covering the 1990 Fifa World Cup in Italy, and he has visited more than 100 countries.

With stacks of documents, books, volumes of poetry, and atlases, the organized chaos of Christopher Merrill’s office on the second floor of the Shambaugh House holds almost as many stories as the man who inhabits the small, oblong room. Merrill’s rimless, rectangular glasses, slightly askew hair, and plain black vest layered over a ruffled blue dress shirt fit the bill of an Indiana Jones-esque character.

Although Merrill, the director of the International Writing Program, said he does not keep track of how many countries he has visited, he admits the number is more than 100. But long before covering war in the former Yugoslavia in the 1990s, the 62-year-old said his childhood consisted of two contrasting dreams.

“When I was a kid, I wanted to be two things — a poet and a soccer player,” he said.

The latter may not have sparked a professional career in the sport, but allowed the Massachusetts native to travel to Italy in 1990 to cover the FIFA World Cup — this adventure, however, was only the beginning of a globetrotting career. Since then, he has been appointed to President Obama’s National Council on the Arts and received a Chevalier from the French government (which is similar to an English knighthood.)

In April, Merrill was also awarded a John Simon Guggenheim Fellowship for general nonfiction. He was selected as one of 168 fellows for 2019 (out of more than 3,000 applicants,) and will receive 12 months of funding to write a book titled The Trials of Roger Williams: A Biography.

The book will cover the life of Williams, a 17th-century Puritan minister who fought for religious freedom and the fair treatment of Native Americans and helped establish the state of Rhode Island.

The final stop on this journey, however, took Merrill to the Hawkeye State. Even though Iowa City has now cemented itself as one of the two UNESCO Cities of Literature in the United States, the certification was not always on the city’s radar.

“Then-Provost Michael Hogan put together a task force on ‘the writing university,’ which I co-chaired,” Merrill said. “In the process of collecting the white papers for that task force, we stumbled upon the then new UNESCO Creative Cities Network, and I wrote an email to UNESCO in Paris saying, ‘Would you entertain the idea of having Iowa City in the network?’ and they replied in minutes, saying ‘We’ve been waiting for Iowa City to apply.’ ”

Over the next few years, Merrill worked with Hogan to compile an 80-page dossier with works that had been completed in Iowa City. Finally, in November 2008, Iowa City became the first City of Literature in North America. (It has since been joined by Seattle and Québec City.)

“I remember bringing the dossier to the City Council and thinking about what we all knew anecdotally about Iowa City, but once we had assembled it in a single document, it became clear that this really is the writing city and writing university,” he said. “And that became the basis for a lot of the programs that would be carried out once we had the designation.”

The certification also came on the heels of the IWP undergoing a massive restoration — prior to Merrill’s arrival, John Kenyon, the executive director of Iowa City UNESCO City of Literature, said the program was in a state of disarray.

“When Chris got here, the program was on life-support,” he said. “It was not in a good place organizationally, and there were parts of the university that were looking into shutting it down. There were administrators who saw [Merrill] as someone who could come in, and take things over, and help to rebuild them.”

The revamping, Kenyon said, was fraught with challenges and obstacles, but more than a decade later, the program has worked its way from three offices in the English-Philosophy Building to its current home on North Clinton Street, right across from the famed Writers’ Workshop Dey House.

“My first year we had 13 writers,” Merrill said. “I had to rebuild every possible relationship both on campus and with funding sources. In those days, our program consisted of a Fall Residency — but because of our very close relationship with the U.S. State Department, we have a myriad of programs now.”

The core program, the Fall Residency, has seen more than 1,500 writers from more than 150 countries since its inception in 1967, but newer additions, such as the Summer Institute, aim to bring a different feel to Iowa’s international writing community — the latter is an intensive two-week exchange that brings 18- to 22-year-olds from India, Pakistan, and the United States.

Although Kenyon said Merrill was instrumental in “writing the history of Iowa City,” Merrill said he had a difficult time writing his own story. When he was approached by Trinity University Press to contribute to an anthology of writers’ lives connecting them to specific species of trees, he said “without even thinking” he jumped at the opportunity to write about dogwood trees.

Although the series — which planned on marrying personal anecdotes with scientific fact and folklore surrounding the species — was scrapped, Trinity told Merrill the staff still wished to publish his section in book form. This, he said, allowed him to deeply explore formative moments in his life.

“As I started to write, on the one hand trying to write as clearly as I could, but on the other hand telling interesting and elucidating stories, I began to realize that at so many important moments in my life there was a dogwood tree around,” he said.

Some stories, such as tending the estate and large garden of an affluent couple spark fond memories. Others, like watching a close high-school friend struggle with mental illness, recount darker moments in the writer’s life.

“Seared into my memory was an image of him on a freezing winter morning with the windows open saying ‘good morning trees,’ and they were dogwoods,” he said. “I found stories that fit into that narrative and compiled them into what became Dogwood.”

Although Merrill said somewhat facetiously that he didn’t plan to write a memoir when initially approached by Trinity, he said writing about his life through the context of the species helped him more clearly form a cohesive narrative.

To help others from across the globe form their own narratives, Merrill has begun the process of selecting the 2019 IWP residents. Despite a politically charged landscape that is at “the forefront of many of our conversations,” Merrill said gathering early to mid-career writers from around the globe has never been more important.

“The thing that we find in this program is that there’s often more that unites us than divides us,” he said. “Israeli and Palestinian writers will never agree on political ideology, but they share the same general landscape and light; we find that having the writers in residence for a considerable time, you reveal who you are, and that becomes productive on an intellectual level.”

The tone of those conversations, he said, can become contentious at times — but when gathered under the guise of the written word, that contentiousness does not come from a position of hatred or bigotry but of curiosity and a “desire to learn.”

Merrill said the future of the IWP is both certain and ambiguous; it continues to grow but in ways he has not even thought of yet.

“The scope of what we do has expanded a lot over the past 15 years, and where that will lead is anybody’s guess,” he said. “We want to make possible more interesting and enduring connections between writers from this country and writers from abroad.”