Iowa softball spoke to the media on Tuesday to discuss its upcoming matchup against Wisconsin in the Big Ten Tournament. 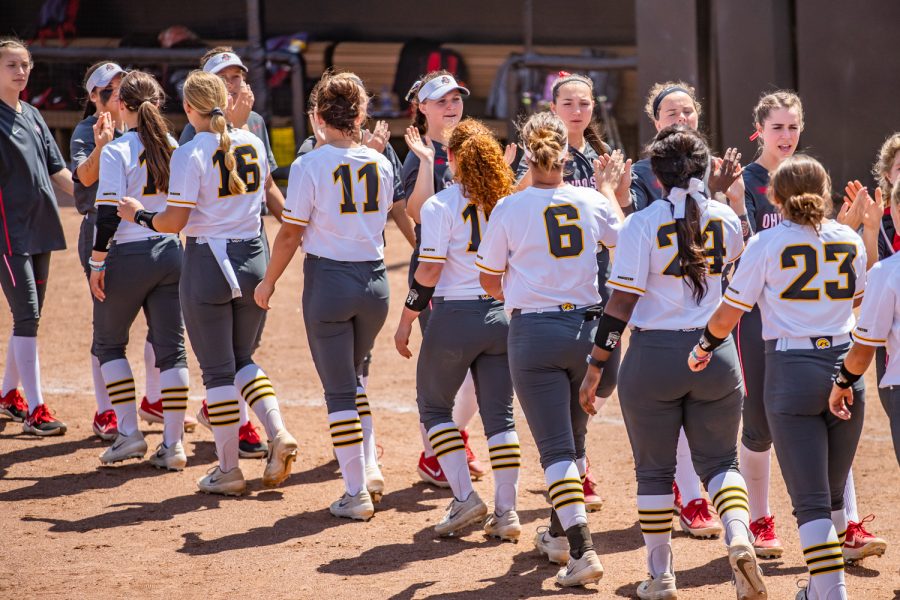 Players line up after a softball game between Iowa and Ohio State at Bob Pearl Field on Sunday, May 5, 2019. The Hawkeyes, celebrating senior day, fell to the Buckeyes, 5-0.

A late-season surge pushed the Iowa softball team into the last spot in the Big Ten Tournament.

The Hawkeyes will play Wisconsin on Thursday at 10 a.m. in Bloomington, Indiana, in the first round. A few Hawkeyes spoke to the media Tuesday about the game.

Being a No. 12 seed in the Big Ten Tournament generally means playing the role of underdog.

That is especially true for the Hawkeyes in this tournament, because the Badgers have played them three times. In that three-game series, Iowa was outscored 21-3.

However, if Wisconsin expects a team that is emotionally sour about having a chance, they would be a mistaken batch of Badgers.

Many Hawkeyes were a part of last year’s Iowa squad that won its first game in the Big Ten Tournament as the No. 12 seed.

“It proves the postseason is open for anyone,” pitcher Allison Doocy said about last season’s upset. “We are excited to play again. We beat Ohio State last year when we were in the 12 spot, so we are motivated to try to do that again.”

Last season’s upset victory isn’t the only thing that is feeding Iowa’s confidence as it prepares for Thursday’s game.

Being able to learn from its mistakes last time out against Wisconsin, along with a new and improved lineup, is also something to draw confidence from.

“We’ve been looking at the old film from that series,” head coach Renee Gillispie said. “I thought we weren’t playing our best game during that time. We have a very different lineup right now than we did when we first played Wisconsin.”

Because of the short season for Big Ten softball, Iowa could have drawn a team it hadn’t seen yet this year. Instead, the Hawkeyes got a team it had faced. That’s an opportunity Gillispie and her team relish.

“I like the idea of going against someone who we’ve already played,” she said. “We have a little bit of an idea of what we’re going against. It’s tough to win four games against any team, so that may help us.”

The Badgers’ pitching staff is anchored by two who tossed the ball in 264 of the 321.2 total innings for Wisconsin.

Both went up against Iowa last time the teams played, and both had great outings. Hesekin totaled 10 innings in the series, giving up 6 hits and no earned runs, and Hestekin went nine innings, allowing 8 hits and 3 earned runs while striking out 13.

“They’ve got two great pitchers who we went up against last time,” Gillispie said. “They’re smart and very, very tough athletes. We know we know we have to be smart around her. We can’t let them beat us.”

In order to avoid once again being vexed by either pitcher, Iowa will have to wait for a chance at the plate.

“Being patient at the plate [is key],” Gillispie said. “Both pitchers are very good at throwing change ups. We were just a little overly aggressive last time [we faced them].”