After three years of negotiations, the Iowa City City Council approved a rezoning decision to relocate the residents of the Forest View Mobile Home Park. 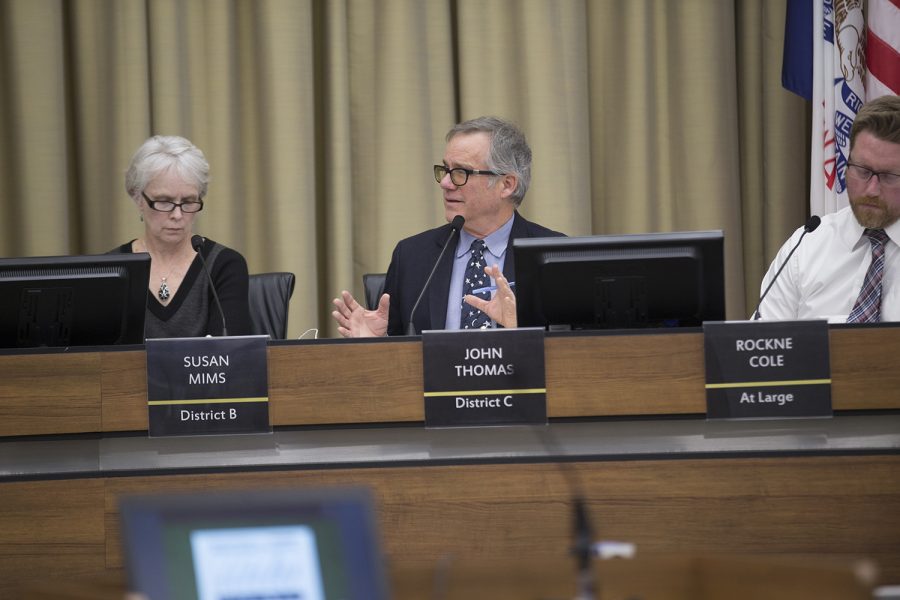 City Councilor John Thomas addresses complaints regarding the new benches for the Pedestrian Mall at City Hall in Iowa City on Tuesday, January 22, 2019. Some community members feel that the new benches are hostile to the homeless.

The Iowa City City Council took its first step with a consideration of the rezoning of the Forest View mobile-home park on Tuesday.

Forest View sits south of Interstate 80 and west of North Dubuque Street. The new zoning plan will give the tenants of Forest View the opportunity to rent new, manufactured housing to the west of where the park is located.

The council unanimously supported the ordinance, with councilors expressing satisfaction with the compromises that had been reached with the developers.

The total zoning ordinance covers 73.15 acres. In addition to manufactured housing for the Forest View residents, the proposed development will include commercial area and a condo building.

The decision is the product of three years of negotiation between the tenants of Forest View and the developers of the land, Blackbird Investors.

Councilor Pauline Taylor said in an interview with The Daily Iowan that when the land was purchased in 2016, relocating the Forest View residents was not on the table.

“The community and the city weren’t really aware of any potential of rezoning,” Taylor said. “The tenants of those mobile homes were just told that the land was being sold, and they would just have to find a place to live.”

Instead, the tenants of Forest View formed a tenants’ association to negotiate with the developers, Taylor said, and officials eventually decided to provide the residents of Forest View with manufactured housing.

The official zoning decision was originally proposed at the City Council meeting on April 2. Several residents of Forest View were present to advocate for the rezoning, but residents of the surrounding neighborhoods presented objections.

A major point of contention for the community and the council was a proposed gas station located near the interstate that would drastically increase traffic in the area. Additionally, the zoning would have removed much of the trees in the area.

The developers presented a new conditional zoning plan at Tuesday’s meeting that addressed the concerns presented at previous meetings.

“It’s our shared goal with the residents of Forest View to commence construction as quickly as possible,” project developer Jimmy Becker said at the meeting.

The updated plan removes the gas station and instead devotes the lot to be used as public open space for the city. The plan also requires that the landscaping preserve the trees along Dubuque Street and add an additional 40-foot buffer of trees between the street and any buildings in the development to make up for the trees that will be cut down.

Speaking with the aid of a translator, Margarita Baltavaz, the president of the  Forest View Tenants’ Association, urged the council to move forward with the decision quickly.

“The only thing that we ask is that you please move forward with the project,” she said. “… because kids are asking in the neighborhood, ‘When are we going to have our home?’ It’s been three years waiting for homes.”