The faculty of the UI Theater Department presented Professor Alan MacVey with a proclamation naming Theater B after him. 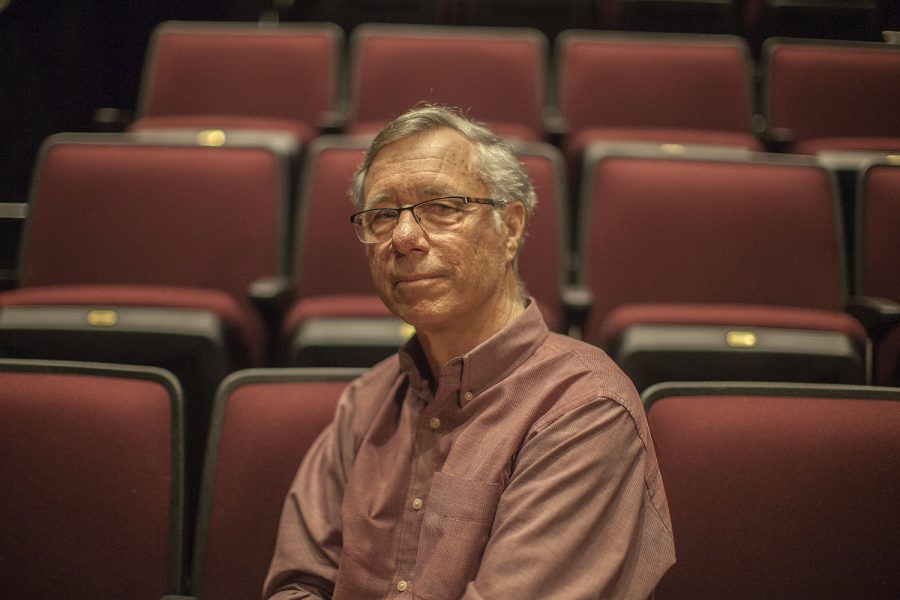 University of Iowa Theater Professor Alan MacVay poses for a portrait in the Theater Building on Monday, May 6, 2019.

The University of Iowa Theater Building’s Theater B has been renamed after Professor Alan MacVey, who will step down as the chair of the Theater Department after 28 years.

On April 17, MacVey was called into Theater B to resolve a routine issue but instead was surprised by his colleagues, who read for him the proclamation to rename the theater in his honor. MacVey now joins the ranks of E.C. Mabie and David Thayer to be immortalized in the Theater Building.

“I’ve taken it as a token of great honor,” MacVey said, who originally wanted the theater to be named after a generous donor family. “It was a total surprise.”

Professor Kim Marra, who teaches theater history and serves as director of graduate studies in the department, said the stability of MacVey’s leadership made for a positive working atmosphere and the department has been lucky to have him.

“He’s been a wonderful leader,” Marra said. “He’s extremely hardworking and very conscientious. He has a big heart and tries to do the best by everyone in the department.”

RELATED: ‘The Sopranos’ producers plan to teach screenwriting course at the UI

Marra, who has worked with MacVey since his arrival in 1991, said he has a gift for leadership. His background as a theater director, which involves vision and collaboration in running a complex organization, primed him for running the department, she said.

“I’ve tried hard to set a positive tone and supportive tone for this department,” MacVey said. “And it’s not just me — the entire faculty here should take credit for that than just the person who sets the agenda and gets people talking.”

After the 2008 flood ravaged the university’s buildings for theater, performing arts, and the museum, Marra said MacVey led the recovery and rebuilding process for the past 10 years. MacVey credited his colleagues, such as Professor Emeritus Eric Forsythe, Associate Professor Kate Conrad, and Professor Bryon Winn for their leadership when the flood hit. While the basement of the Theater Building was rendered unusable because of the flood, MacVey said, the first floor was inches from being flooded and seeing the same fate as Hancher and the previous music building.

MacVey said the last thing he wants to see done as chair of the department is to see UI complete a plan for a future flood, in case the Theater Building is not so lucky next time.

Professor John Cameron said MacVey’s 28-year run as department chair is an anomaly, because most chairs don’t hold their positions that long. He called it a testament to MacVey’s success.

In addition to leading the department through the natural disaster, Marra said, MacVey initiated a number of creative endeavors, such as the Partnership in the Arts program, which brings professional artists to campus to work with Iowa students in creating new plays.

MacVey also led the initiative to build digital arts on campus through a successful multi-department cluster-hiring of new faculty and the creation of a digital-arts certificate.

MacVey said while he’s stepping down as chair, he will not retire and will continue to be on faculty as a professor and director of the Division of Performing Arts. He said he has worked with the next chair of the department, Associate Professor Mary Beth Easley, to aid in the transition, and he expects his work as chair to end in June.