In a season for the record books for Iowa, Laulauga Tausaga and Nathan Mylenek have been leading the way. 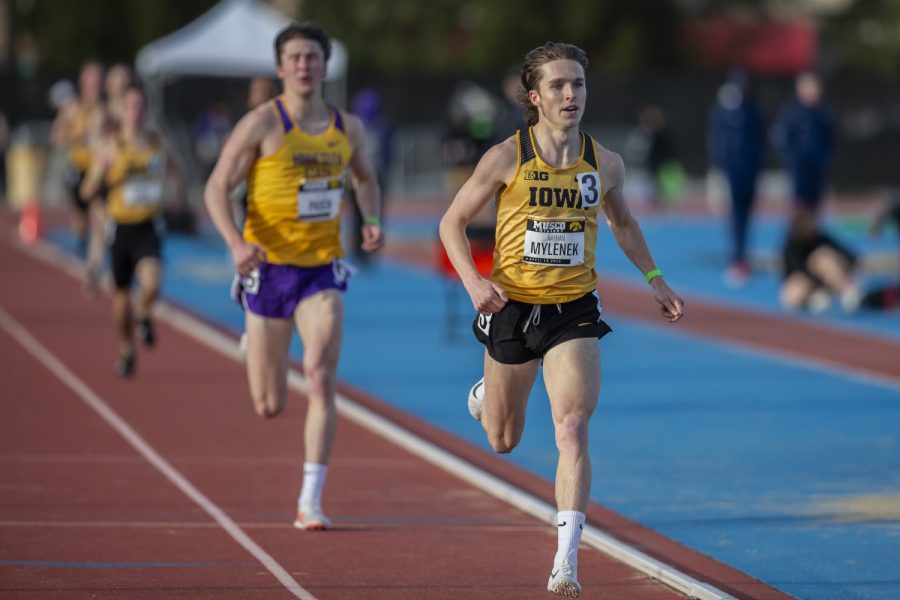 Iowa distance runner Nathan Mylenek leads the pack of the 1500m run at the Musco Twilight Invitational at the Cretzmeyer Track on Saturday, April 13, 2019.

The outdoor track and field campaign has seen Iowa soar to new heights.

The men and women each reached their highest rankings last week since the coaches’ poll started tracking them.

The women won their first ever Hy-Vee Cup at the Drake Relays, and school records are in jeopardy of being broken on an event-to-event basis.

Behind these accomplishments for the Hawkeyes is a deep pool of talent across the board, but each squad has seen a competitor rise above the rest.

For the women’s squad, thrower Laulauga Tausaga continues to put her name in the conversation for greatest athlete in program history.

The national honor came after Tausaga’s performances in California at both the Mount Sac Relays and the Beach Invitational, where she broke the school record in all three throwing events.

Tausaga threw 62.28 meters in the discus and 18.02 meters in the shot put to extend the school records she had previously held. If that wasn’t enough, she then claimed the hammer-throw record for herself (61.34 meters).

The marks in the shot put and discus lead the Big Ten and come in at second-best in the NCAA. Tausaga’s hammer throw record is fifth in the conference.

Tausaga has added to her résumé all season, as has Nathan Mylenek on the men’s side.

Mylenek does not have the quantity of broken records that Tausaga has — which is not a negative, because few do — but the 3,000-meter steeplechase record he broke at the Mount Sac Relays was one that had been brewing for a long time.

When Mylenek crossed the finish line with a time of 8:38.53, he broke a 63-year-old school record. The record previously belonged to Deacon Jones, who set the record in 1956.

Mylenek flew right by Jones’ time and set the mark by nearly 10 seconds.

In another noteworthy performance, Mylenek won the men’s Wieczorek 1,500 meters at the 20th-annual Musco Twilight. The event is named after Iowa’s former Hall of Fame head coach, and Mylenek did the title justice by bringing home gold.

He finished with a time of 3:52.06, breezing by the rest of the competition.

Tausaga and Mylenek have both been at the center of remarkable seasons for both Iowa track squads. They, along with the rest of the talented team, will move to their next challenge when Iowa hosts the Big Ten Outdoor Championships, beginning Friday.