Iowa wrestling earned The Daily Iowan Men's Team of the Year award for the 2018-19 season. 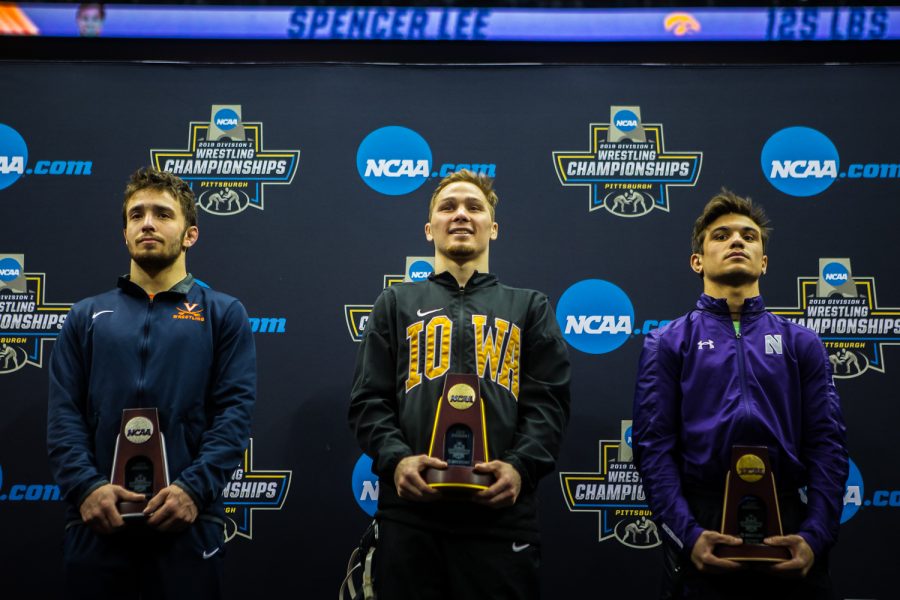 Iowa's Spencer Lee holds the first-place trophy for the 125-pound weight class during the final session of the 2019 NCAA D1 Wrestling Championships at PPG Paints Arena in Pittsburgh, PA on Saturday, March 23, 2019.

The Iowa wrestling team finished its season naming six All-Americans and a national champion while placing fourth at the NCAA Championships.

At the NCAAs, Spencer Lee showed up and showed out as he defended his 125-pound national title with a 5-0 win over Virginia’s Jack Mueller. Austin DeSanto and Kaleb Young placed fifth, Alex Marinelli and Jacob Warner placed seventh, and Pat Lugo finished eighth.

Max Murin and Sam Stoll were only one win away from being named All-Americans, and Cash Wilcke was two.

“It’s crazy because the guys that didn’t All-American here, how close were they? I mean, they were so close, and it’s heartbreaking. I feel for them; it sucks,” Marinelli said. “We’re only going to get better, and that’s what’s scary to these other guys. We’ve got returning guys and we’re going to be really good.”

Before the performance at the NCAAs, the squad won all of its Big Ten duals in the regular season and finished the year with a dual record of 14-1, losing only to Oklahoma State in the regular-season finale.

Marinelli recorded a perfect dual-meet season, going 15-0 with 8 pins. Last season, the 165-pounder also had an undefeated Big Ten record, so the sophomore is now 17-0 all-time in Big Ten duals. He went on to win a Big Ten Championships with a 9-3 upset over Penn State’s Joseph Vincenzo.

RELATED: Hawkeye wrestling looks to be better in 2020

“It means everything,” Marinelli said after his Big Ten Championship win. “Coming away with a Big Ten title, it’s huge from last year losing the first match. It’s terrible, and you don’t want to feel that way ever again.”

The Hawkeyes won the Midlands Championships and crowned two champions at the tournament: Marinelli and DeSanto. DeSanto won 15-5 after watching Lee fall short of the title to Northwestern’s Sebastian Rivera.

Because of all of these accomplishments, The Daily Iowan voted the Iowa wrestling team the men’s team of the year.

However, these feats weren’t enough for the Hawkeyes. They still want more, and it’s completely feasible for Iowa, which will have seven returning All-Americans in the lineup next season.

Iowa’s last returning All-American is Michael Kemerer, who was forced to sit out the 2018-19 season after undergoing surgery.

So, this fourth-ranked team went back to the drawing board to get ready for next season after NCAAs.

“We have to start right now, phase one,” Brands said after NCAAs. “These guys who are here have got to have a break, and those young guys are getting ready for the international season. After a couple weeks, these guys will start getting into the strength and developmental phase.”