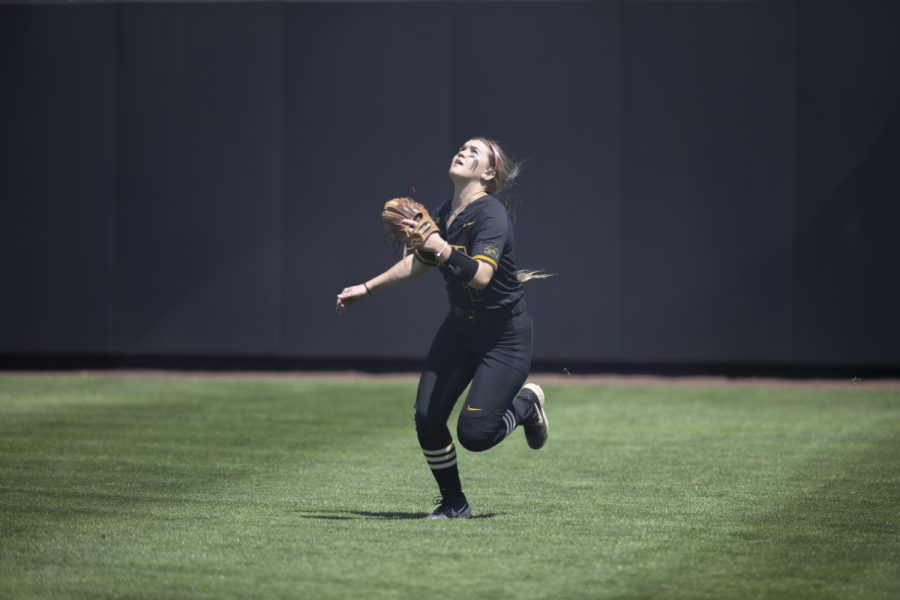 Iowa infielder Cameron Cecil runs before catching the ball during the game against Ohio State at the Bob Pearl Softball field on Saturday, May 4, 2019. The Hawkeyes were defeated by the Buckeyes 0-10.

A beautiful weekend at Pearl Field helped Iowa softball clinch a berth in the upcoming Big Ten Tournament and honor graduating seniors at the same time.

The Hawkeyes desperately needed things to go right to stay away from being left out of the top 12 in the conference. The team grabbed a win in the first game of the weekend series against Ohio State, 1-0, and a Maryland loss lifted the team into the postseason.

Since all of this figured itself out before Sunday’s rubber match against the Buckeyes, it made for a stress-free Senior Day. That may have hurt the Hawkeyes’ production at the plate, because Sunday’s game proved to be a slow day at the office for Iowa bats.

“We came out on [May 3] and did what we needed to do, locking that in for us to be able to get into that Big Ten Tournament,” head coach Renee Gillispie said. “We would’ve liked to have this game for the seniors, that was kind of the goal, [to come] out hard and play for them. We had opportunities, [with a] bases loaded situation, but I’m proud of them.”

Senior Erin Riding took the circle in her final game on the home diamond, and it was a struggle from the get-go. The Buckeyes didn’t get anything going in the first inning, but hard-hit pop-ups predicted a rough game for the right-hander Riding.

After giving up 2 runs on 3 hits in the second, freshman Sarah Lehman relieved Riding and was stable from the circle for the remainder of the contest.

Lehman pitched two scoreless innings following the change, but the Buckeyes manufactured some ruins in the top of the fifth to take a 4-0 lead heading into the stretch.

The rest of the matchup was a story that has been told for much of the season. Iowa managed to get two runners in scoring position with no outs and even loaded the bases following a walk from Elizabeth DeShields. But an inability to hit in the clutch made it a futile effort. Lehman entered the game and slowed things down from the circle for the team, but the offense was unable to respond.

But grabbing that berth in the conference tournament transcended these small in-game goals. Instead, getting the seniors extra time in their uniforms was a great focus of the last week.

“I’m really glad we got that first game,” Lehman said. “It was a really big one, and we needed it. We came out focused again [on Sunday] and really wanted it, but we came up a bit short.”

At the forefront has been senior Mallory Kilian. The consistent batter compiled 99 hits and 54 RBIs over her career. But an injury in the team’s game against Northern Iowa on April 30 limited her availability, so the team was focused on getting her more playing time to end her career.

“Mal is just that solid rock,” Gillispie said. “Never too up, never too down. If we’re getting too low or not getting enough energy, she’s bringing us up, and if we’re too high, she’s keeping us level…[She] twisted her ankle about a week ago at UNI. It was tough in this game because we wanted to be able to get her at least an at bat, so we’ve got to get her healthy and ready for this weekend.”