Iowa’s pitching fell apart on May 5, just one day removed from its best outing of the season. 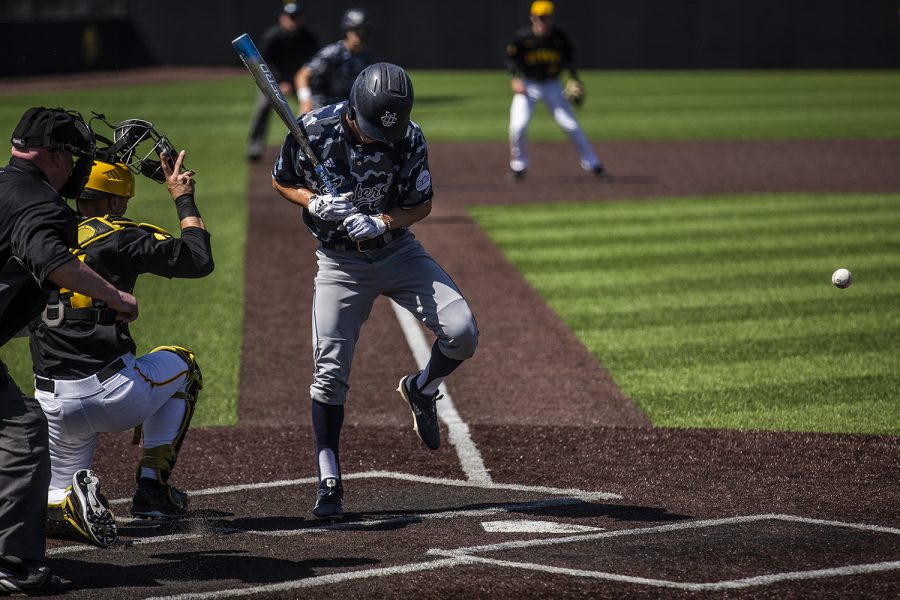 during the game against UC Irvine at Duane Banks Field on Saturday, May 4, 2019. The Hawkeyes defeated the Anteaters 1-0.

After Iowa baseball’s pitching kept Cal-Irvine at bay for two-straight games, things fell apart in the series finale on Sunday in the 15-4 loss.

The Anteaters strung together a 6-hit, 9-run fifth inning — an inning head coach Rick Heller tabbed as “a nightmare” — to break away from the Hawkeyes in a game that featured a sub-par effort from the Black and Gold arms.

“We just weren’t very good on the mound, to be honest,” Heller said. “It was as simple as that.”

Grant Judkins started, and he lasted 4 innings. The junior gave up 3 runs (2 earned) on 6 hits, striking out 3.

After he exited, though, Duncan Davitt, Shane Ritter, Trace Hoffman, and Jason Foster struggled in their combined 1.2 innings.

Davitt, Ritter, and Hoffman’s efforts resulted in Iowa’s abysmal fifth inning, and then Foster gave up a run in his inning on the mound.

Things settled down when Adam Ketelsen took over. The Mount Vernon native pitched 1.1 innings and was the only Hawkeye arm to not allow a run or a hit.

“I thought Ketelsen did a nice job today, that was a real positive to see,” Heller said. “We brought him in during a lefty-lefty situation and let him roll through the middle, and I thought he did a nice job there.”

Sunday’s loss was a stark contrast to the two previous matchups — both Hawkeye wins, and both contests that featured stellar efforts from the mound.

On May 3, Cole McDonald lasted seven innings, allowing just 2 runs (1 earned) and 5 hits while striking out 5. Trace Hoffman came in to relieve the Friday-night starter, and he gave up just 1 run in the final two innings of the 6-3 win.

Then, on May 4, the Hawkeye arms threw a shutout in the best pitching performance of the season.

Saturday starter Cam Baumann tossed 5 innings, allowing just 5 hits. Then, Foster and Grant Leonard filled in, and no Anteater could muster a hit against the pair.

Regardless of Sunday’s outcome, the two wins over top-25 Cal-Irvine is a major step in the right direction. This past weekend marked the sixth-straight series win for the Hawkeyes, who have taken down three top-30 teams in that span and remain four games above .500 in conference play.

“I think the biggest thing is to not forget what we did here and what we’ve done the last six weeks — that’s rallying off big series wins,” Iowa’s Chris Whelan said. “Obviously, you want to capitalize on those sweeps because you don’t get those opportunities very often, but at this point, I think Coach Heller has done a great job of letting us know, ‘Hey, we’re still winning series.’ ”
The Hawkeyes will have some time before their next contest. With no midweek contests this week, Iowa will wait until May 10 to take on Michigan State in a three-game series starting at 6:05 p.m. at Banks Field.

“It wasn’t very good [Sunday], and everyone knows that — we don’t need to belabor it,” Heller said. “Wipe it away and have a good week of finals, and then get ready to go for Michigan State.”