Helton: 20 Out of 20: Tulsi Gabbard isn’t making waves yet, but can she make a splash in Iowa?

A young female veteran of color seems like a promising candidate on paper, but the Hawaii congresswoman finds herself near the back of the primary field. 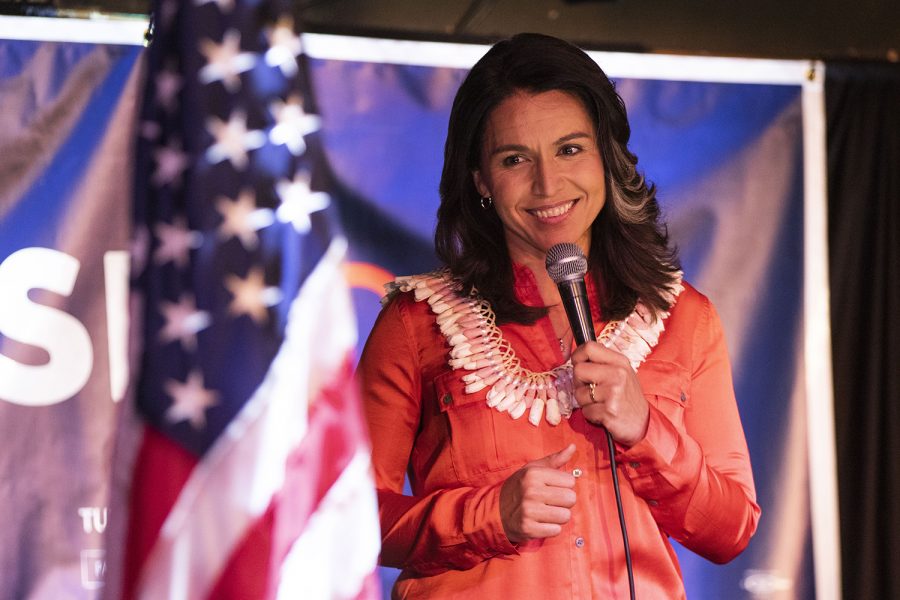 U.S. Rep. Tulsi Gabbard, D-Hawaii, speaks during an event at the The Mill on Thursday, February 21, 2019. Rep. Gabbard visited Iowa City on Thursday after having cancelled stops in the area last week due to inclement weather.

A 30-something from a marginalized community with a record in military and local government is running for president. And no, I’m not talking about Pete Buttigieg. Even though she has a compelling background and plenty of experience for her age, Rep. Tulsi Gabbard, D-Hawaii, has yet to receive a lot of attention for her campaign for the Democratic presidential nomination.

She faced criticism for meeting with Syrian President Bashar al-Assad and for her previous anti-LGBTQ positions. She’s been largely drowned out by more prominent candidates who occupy any lane in which she could conceivably run. However, it’s still early in primary season, and with a line of candidates so long they could form a bridge from Los Angeles to Honolulu, I’m not ready to count the Hawaiian out.

So, what does Gabbard have to offer? Could she pick up some momentum, or is her candidacy dead in the water?

How could she win the nomination?

Gabbard’s biggest selling point seems to be her commitment to her antiwar stances. She has seen the effects of American meddling in foreign conflicts as a major in the U.S. Army, and she’s not happy with the results. This sentiment seems to have broad appeal across the political spectrum. After all, President Trump included anti-intervention positions in his predominantly far-right platform.

As Daily Iowan Opinions Editor Marina Jaimes wrote in her article on Gabbard’s visit to Iowa City, “[Gabbard], unlike politicians of the left and right, acknowledges the damage done on foreign soil in the name of freedom.”

Also, unlike other young presidential candidates such as Buttigieg, she hasn’t made her youth a main bullet point of her presidential pitch. In fact, it’s hardly a footnote; Gabbard knows she won’t win the nomination by mobilizing the youth vote with so many others dividing up the millennials and college activists. She’s going for appeal that spans generations and lifestyles. Again from Jaimes’ piece — when she spoke to an older attendee of Gabbard’s event — “I’m from the ’60s. We don’t like war.”

If she can manage to overcome her sticky past with Syria and anti-gay politics, it’s conceivable that Gabbard could sneak her way up the polls. If Beto-mania could be replaced by Boot Edge Edge, then maybe someone who isn’t a white man could have a turn as the trendy pick.

Realistically, this isn’t very likely. I don’t think she stands much of a chance, but crazier things have happened.

How could she beat Trump?

If she somehow manages to get on the top of the ticket, it’s probably safe to say that her antiwar and big-tent attitude won over Democrats and the independents that voted for her in the primaries or caucuses. Gabbard has mostly avoided going on the offensive against Trump, but I can imagine her pivoting in the general election. I mean, what’s the opposite of an old, white, Christian man who dodged the draft? I’m not sure, but a young, mixed, Hindu woman with multiple deployments comes pretty close.

The best-case scenario for Gabbard is for her calm, realistic approach to government to outshine Trump’s loose-cannon leadership and tirades. Of course, that’s true for Democrats regardless of who their nominee happens to be. But that tactic might work better for Gabbard than it would for Sen. Bernie Sanders, I-Vt., who calls for radicalism albeit a type a world apart from Trump’s.

She’s definitely not the favorite, and Gabbard definitely has a lot of work to do if she wants her shot at the White House.