Cal-Irvine boasts one of the best pitching groups in the nation, but Iowa remains confident it will string together runs consistently. 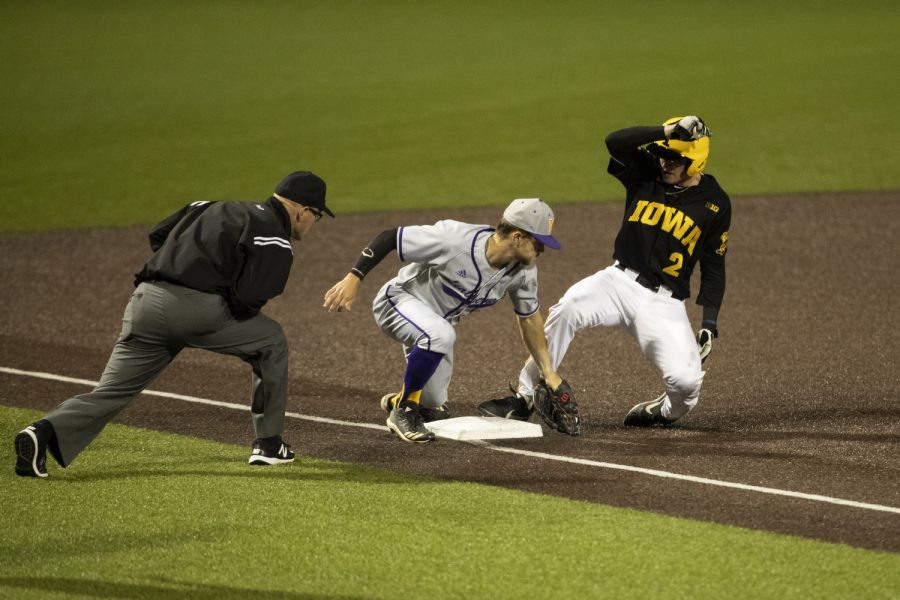 Iowa outfielder Brendan Sher slides in safe to third at a baseball game between the Hawkeyes and Western Illinois at Duane Banks Field, on Wednesday, on May 1, 2019. The Hawkeyes beat the Leathernecks 8-7.

Iowa baseball has played three top-30 programs this season, and it’ll get a fourth shot at a series win this weekend.

Starting today, No. 25 Cal-Irvine will travel to Banks Field for a three-game series, and success against the Anteaters could mean a major payout for the Hawkeyes.

In Baseball America’s latest projected field of 64 for the NCAA Tournament, the Hawkeyes were one of the first four left out.

A series win against Cal-Irvine, though, could change that; if Iowa wants to solidify its case as an NCAA Tournament team, this weekend is a perfect opportunity to do so.

“We’ll have a pretty good plan in place, but they’ll run some really good arms at us,” Iowa head coach Rick Heller said. “They do a great job of locating, and we’re going to battle.”

All three weekend Anteater starters — Trenton Denholm, Tanner Brubaker, and Andre Pallante — boast ERAs below 2.63. Combined, they have a 19-7 record.

And while he isn’t underselling the Anteater arms by any means, Heller remains confident his team’s offense will be able to counter.

“I think our guys will go up and give us some quality at-bats,” he said. “We’ve seen some pretty good arms the last couple of weeks. We’ll be ready.”

One of the players providing quality at-bats for Iowa has been Brendan Sher. The first-year Hawkeye from Indianola earned Big Ten Freshman of the Week — the first Iowa player to earn said award since Robert Neustrom in 2016.

“Brendan loves to play, and he’s got a hop in his step, and he plays hard every single day, every single second. That’s why we wanted him on our team,” Heller said. “As a freshman, he’s been doing a great job in limited at-bats here and there … we gave him the nod as far as starting goes last week, and he’s ran with it.”

In four-straight starts, Sher went 6-for-15 and put up a .667 slugging percentage. Then against Western Illinois on Wednesday, his first action since winning the award, Sher went 3-for-4.

Sher’s surge at the plate remains even more encouraging when factoring in two missing Hawkeyes — Mitchell Boe and Zeb Adreon.

Heller said Boe underwent surgery for facial fractures on Tuesday and could be out for possibly three weeks, two at the the minimum.

Adreon remains out under concussion protocol.

“We’ll have to wait and see when [Adreon’s] cleared to play,” Heller said. “I’m hoping Saturday would be the first day he’d be able to [return], because he’s obviously swinging a hot bat right now. Very unfortunate for both of them.”

Sher and the rest of the Hawkeye offense will have their chance to take on the top-notch Anteater pitching at 6:05 p.m. today at Banks Field. On Saturday, Iowa and Cal-Irvine will square off at 2:05 p.m. before concluding the series on May 5 at 1:05 p.m.