Judge rules in favor of Kirk Ferentz in trial with neighbors 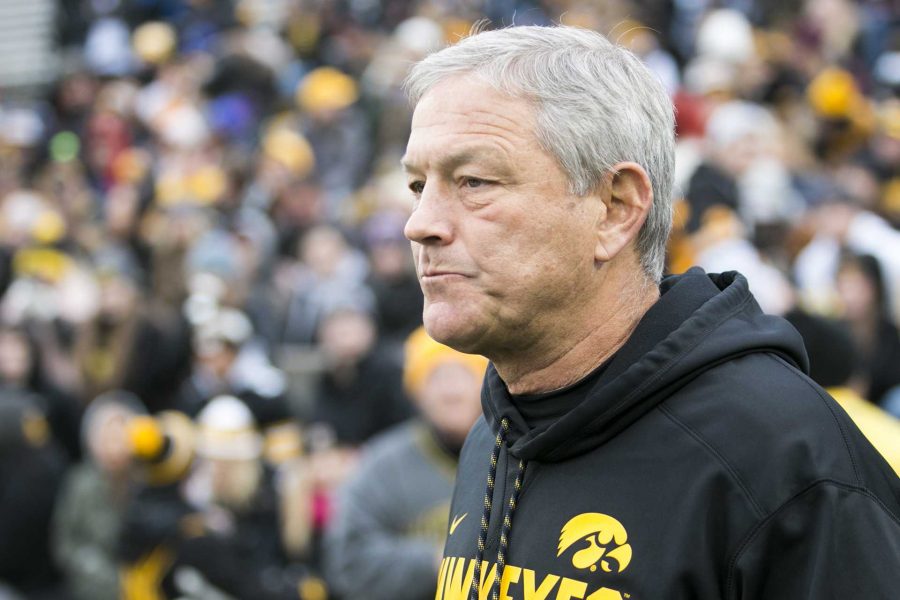 Iowa head coach Kirk Ferentz walks into the stadium before an Iowa/Minnesota football game in Kinnick Stadium on Saturday, Oct. 28, 2017. The Hawkeyes defeated the Golden Gophers, 17-10.

Johnson County judge Chad Kepros has decided that Kirk Ferentz and his wife, Mary, did not enter a contract with their neighbors and therefore do not owe money for construction done in their neighborhood. This decision comes after a two-day trial held in February.

Kepros ruled that since the Ferentzes are not a part of the Saddle Club Road Homeowners’ Association, they therefore cannot be held to their rules. He also dismissed the claim that Ferentz owed $9,600 and a lien the neighbors filed against the Ferentzes’ home, which is worth $1.2 million.

John and Anne Marie Buatti, Gary and Becky Watts, Elayne Sexsmith, and Fred Page, Ferentz’s neighbors and the plaintiffs in the suit, were required by Kepros to pay the cost of the suit.

Kepros also said the Ferentz home’s landscaping does not interfere with travel on Saddle Club Road.

As The Daily Iowan previously reported, court documents show the Ferentzes purchased land on Saddle Club Road in 2001, early on in his tenure as the football head coach. A long-running dispute between the Ferentzes and their neighbors began that year after the Buatti’s proposed subdividing 20 acres of property for development.

The Buattis also wanted to resurface and extend the gravel road to give their children more space on which to ride their bikes. The Ferentzes objected mainly because of privacy concerns, according to dispositions.

The neighbors formed an agreement in 2001 to create a homeowners’ association, which was intended to establish guidelines for splitting road-maintenance costs in order to settle the dispute. The Saddle Club Homeowners’ Association, which the plaintiffs are a part of, was not created until 2015.

Gary Watts, a developer, moved in after the Buattis subdivided their property, and Watts later paid to change the road surface to chip and seal in 2003 despite Mary Ferentz’s opposition.

Another lawsuit, involving a breach of contract claim the plaintiffs were not allowed to include in the first suit, is set for June 9, 2020. It is not clear if Kepros’ decision will affect next year’s trial.