With the first season under Renee Gillispie winding down, Iowa hopes to grab some wins heading into the offseason. 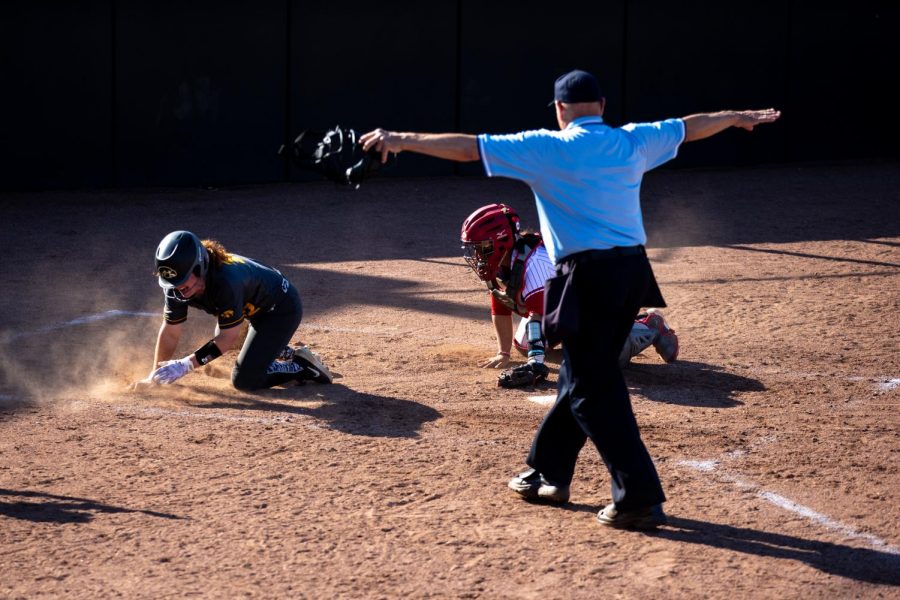 Iowa catcher Kate Claypool slides into homebase during the game against Nebraska at the Bob Pearl Softball Field on Wednesday, April 24, 2019. The Hawkeyes were defeated 7-5 by the Huskers.

Hawkeye softball hits its last home stand of the year this weekend with a series against Ohio State at Pearl Field.

It’s been a long and winding first season under head coach Renee Gillispie. With only two graduating seniors, this final regular-season series can push the team on a positive upward trajectory heading into next season.

The numbers show that while the Hawkeyes have been solid pitching in the circle, there is certainly room to improve at the plate.

The team is a disheartening 2-8 on its home turf this season. Of course, this might have to do with the majority of its nonconference slate took place on neutral fields, and its conference schedule has been brutal at home. But it’s certainly not where the team wants that number to be.

Iowa’s lone wins at Pearl Field this season were Illinois on April 13 and Nebraska on April 24. Both happened at the latter end of a series, and pitcher Allison Doocy took the circle and pitched the entire game each time.

With a spot in postseason play unlikely, it would be good for this young team to grab a win heading into the offseason.

It will be a test, though. Ohio State has a 32-14 overall record this year and is 15-5 in the Big Ten. Iowa has yet to get any wins against teams in the top four spots in the conference, and the Buckeyes are sitting at No. 4.

The pitching staff has made great strides this season — Doocy has continued to be dominant and sophomore Sarah Lehman has transitioned into a solid starter. The staff has given the team chances to win down the stretch, but the offense hasn’t always responded.

Junior transfer DoniRae Mayhew has undoubtedly been the top force at the plate for the team. She leads the team in a number of statistical categories, including doubles (8) and hits (34) despite not having the most at-bats.

She also leads the team in batting average at .274. For perspective, Ohio State hits .301 on the season

This is a bit lower than you want a go-to hitter to be at this level, and that holds true all the way through the top part of Iowa’s lineup. Consistency is key for this young team, and as the young Hawkeyes morph into veterans next season, having quality at-bats will be the difference.

They have the chance to prove this against Ohio State this weekend, though it’s an uphill battle. Ohio State ranks fifth in the conference in team ERA at 2.19 (Iowa can be found five spots lower, with an ERA of 3.84).

RELATED: Iowa softball falls to Northern Iowa on the road

Doocy’s continued dominance in the circle represents the future for the team in a lot of ways.

Her command has made Gillispie’s transition into head coach much smoother. Simply, she gives the team chances to win games, whether the offense capitalizes at the plate or not.

The junior is fourth in the conference in strikeouts with 189.

She’ll face a tough Buckeye offense this weekend. They know how to cash in, too; Emily Clark leads the team with 51 RBIs. But Doocy has proven she can keep her team in games, so carrying some wins out of the weekend is certainly possible for this young team.