On May 1, during an informational meeting on the West Campus, University of Iowa President Bruce Harreld discussed the importance of the P3 in funding the UI’s strategic plan. 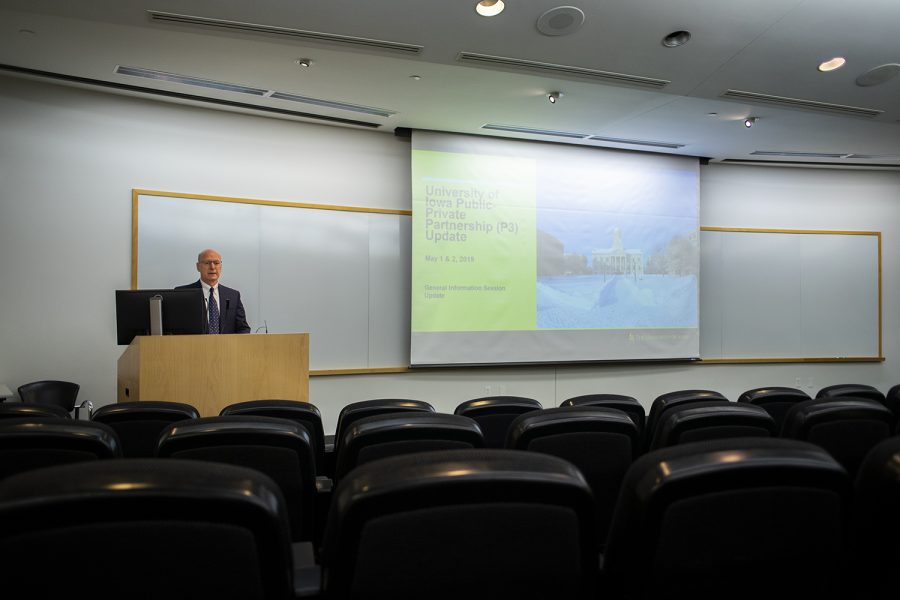 University Chief Financial Officer and Treasurer Terry Johnson speaks about the Public-Private Partnership process at a forum about the University of Iowa becoming a P3 school on May 1, 2019.

Tuition revenue and state support are the two primary funding sources for the state Board of Regents, but as students increasingly shoulder the cost of financing their education, University of Iowa President Bruce Harreld said on Wednesday the potential public/private partnership for the institution’s utility system could make up for the gap in funding the UI strategic plan.

“If we don’t do this deal, we’ve got to rethink our strategic plan and our objectives,” Harreld said at a public-information session at the Medical Education & Research Facility.

Amid continually tuition hikes and cuts to funding for the regent universities, UI officials have identified this potential 50-year agreement between the UI and a private firm as an opportunity to open up a new revenue stream.\

Through the partnership, the UI would fund initiatives highlighted in the strategic plan, such as teaching, professional, and student scholarships, and research.

The UI has seen a consistent reduction in state appropriations, and tuition has not risen enough to recover the decreases in funding, Harreld said.

“Philanthropy will offset some of that, but hasn’t even come close to offsetting that,” Harreld said. “Our estimate is we need about $35 million in new resources every year to get to our strategic plan, and we’re about $15 million a year short.”

While Iowa lawmakers did not make midyear funding cuts to the regent universities this year, the institutions saw their budgets trimmed by more than $30 million in the previous two budget years.

Legislators passed a funding boost of $12 million for fiscal 2020, but regents are looking at 3.9 percent tuition hikes for resident undergraduates at the UI and Iowa State University because that funding increase still falls short of their original request for an additional $18 million.

Because the UI is offering the potential operator benefits in the partnership, it expects an upfront payment — at an amount that has not yet been determined — from the private firm to go into an endowment for the strategic plan, Harreld said. The firm will receive an annual utility-fee payment from the UI, which will factor in an fixed fee and determined inflation.

The UI posted the request for qualifications on its website as of April 25. The deadline for responses is June 14.

The UI released the Confidential Information Memorandum, a document outlining the current operations of the utility system for potential partners, on Wednesday. Key aspects of the memorandum were discussed at the information session.

“This is a document that will get these potential bidders up to speed on kind of what our system is, how complex it is,” UI Chief Financial Officer and Treasurer Terry Johnson said at the meeting.

RELATED: Climate Action Board recommends including the city in the UI public-private partnership decision

The firm that partners with the UI will be responsible for maintaining and operating the electrical system, steam, water, chilled water, sewer and high-quality water system, and the tunnel distribution on both the main and Oakdale campuses.

The UI will require the firm to meet operational objectives, such as eliminating the use of coal at the main campus by 2025, exploring the use of renewable fuels, providing employment packages to current utility employees, and maintaining the system at a similar or better condition.

The next step will be receiving requests for proposals from interested firms, expected to occur in July.

“We’re going to broaden our knowledge base and our understanding if we move forward with the new operator,” Johnson said. “We’re not going to just pick anyone off the street. These will be world-class people and they will have done this in numerous places around the world.”