Ruden: Easley belongs in the NFL

Nick Easley has plenty of experience being an underdog. Now is his chance to prove he belongs. 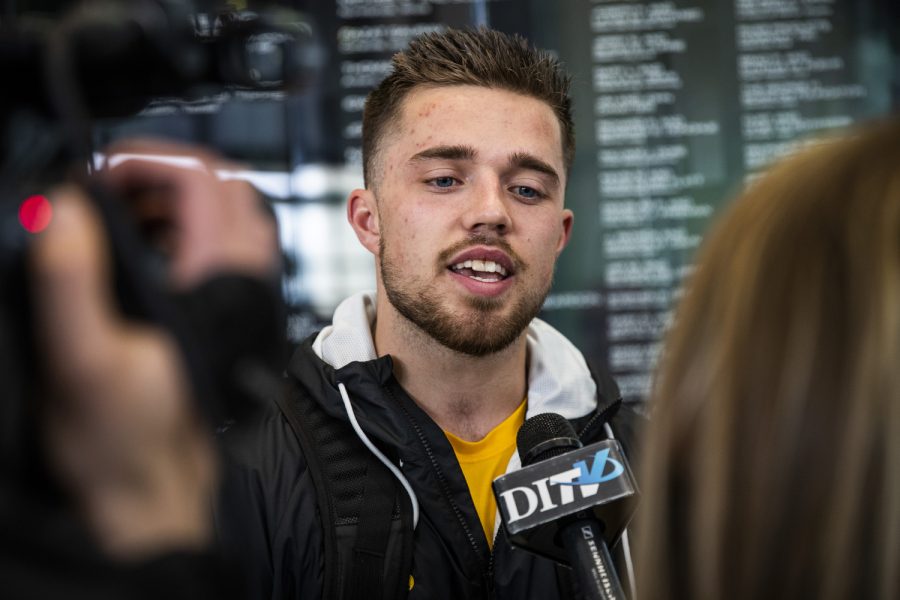 Iowa wide receiver Nick Easley talks to the media during Pro Day at the Football Performance Center on Monday, March 25, 2019.

Just four years ago, Nick Easley didn’t look like he would ever be an NFL wide receiver.

Even after a record-setting season at Newton High, Easley only received interest from NAIA and Division-3 programs, and Missouri Western even recruited him as a kicker and punter.

Fast forward to April, and Easley has signed an undrafted free-agent deal with the Buffalo Bills. And he has a good shot at making the 53-man roster come September.

Buffalo’s depth chart includes Zay Jones and John Brown, but neither one topped 60 receptions or 720 receiving yards. Throw Robert Foster in there, and while they are decent pieces, neither one is a stand-alone playmaker.

The Bills also pulled Cole Beasley from the Dallas Cowboys in the offseason, agreeing to a hefty four-year, $29 million contract — a nice pull for the former undrafted free agent.

That’s the path Easley wants, and it’s a path that’s entirely possible for him, given that Buffalo didn’t address its receiver needs in the draft and Easley’s production in college.

In his two years at Iowa, Easley demonstrated fluid route-running, exceptional quickness, and soft hands that translate to a lot of easy — and difficult — receptions.

RELATED: Missouri Western even recruited him as a kicker and punter.

Easley led the Hawkeyes with 51 receptions for 530 yards to go along with 4 touchdowns in his first year in the Black and Gold. In 2018, he posted almost identical numbers, hauling in 52 passes for 494 yards and 5 scores. However, his performance went under the radar, as T.J. Hockenson and Noah Fant stole the spotlight with incredible seasons at tight end.

Standing 5-11 and weighing 205 pounds, Easley brings a Julian Edelman-like presence to the slot. His shiftiness and quickness play a big role in his ability to create separation in the slot.

He showed it in the Outback Bowl against a Mississippi State defense that boasted three first-round NFL Draft picks. In the bowl win, Easley caught 8 passes for a career-high 104 yards and 2 touchdowns. Pretty good for a guy whose family first thought his college football career would be as a kicker.

This isn’t the first time Easley has been a long shot. He’s used to that role.

Instead of becoming a college kicker, Easley took his talents to Council Bluffs, where he joined Iowa Western. Easley racked up 954 yards in his sophomore season as a Reiver — the second-most in a single season in school history — en route to first-team NJCAA All-American honors.

Even after that performance, he didn’t earn a scholarship. Easley came to the Hawkeyes as a preferred walk-on before earning that ever-elusive scholarship by becoming the team’s leading receiver.

Easley has shown he has the ability to produce at the next level. After all, the NFL is a passing league, and there are always spots for selfless, reliable slot receivers.

That’s what Easley brings to the Bills. To doubt him again would be foolish. But even so, Easley’s ready to prove the doubters wrong once again, this time in Buffalo.