Iowa softball looks for support from bats against Northern Iowa

Iowa softball will take on Northern Iowa on Tuesday, trying to bounce back from a disappointing weekend. 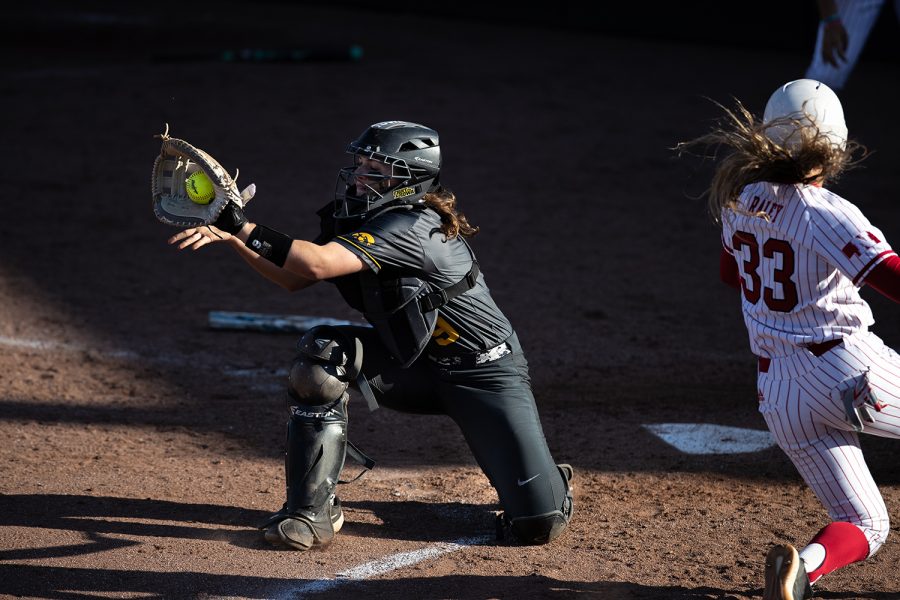 Iowa catcher Abby Lien catches a ball during the game against Nebraska at the Bob Pearl Softball Field on Wednesday, April 24, 2019.

Iowa softball is coming off arguably its most disappointing weekend series of the season — it was outscored 23-1 against Minnesota in a three-game set in Minneapolis.

A series score like that is pretty indicative of one team’s total dominance over the other, and that was certainly the case. Not only did Iowa manage just 1 run, it was also held to just 7 hits, and the Hawkeyes also struck out 24 times.

It’s easy to get discouraged after such a performance, but the Hawkeyes will have to quickly regain their composure as they get set to go against Northern Iowa today in Cedar Falls.

First pitch for the game is scheduled for 5 p.m., and the Hawkeyes will need to get some bats on the ball if they hope to win.

The performance against Minnesota was pretty indicative of how frigid the Iowa bats have been since Big Ten play began, but they have shown some sparks that are promising.

One has been Abby Lien, a freshman from Apple Valley, Minnesota.

While she might sit all the way down at ninth in batting average on the team at .204, she has made significant strides since conference play began.

In Big Ten play, Lien leads the Hawkeyes with a .265 average and also leads the team in RBIs in conference play with 7.

She has proven to be one of the Hawkeyes’ most consistent power hitters as well — she’s tied with DoniRae Mayhew for the team lead in homers with 5. She also ranks second on the team with a .426 slugging percentage.

While Lien managed only 1 hit in 6 at-bats against Minnesota, it was a timely one. She would eventually come around to score the Hawkeyes’ lone run of the weekend.

She was knocked in by another hot Hawkeye batter, Lea Thompson.

Thompson isn’t an everyday player, but she has got some solid playing time this season as a junior.

A rough start taints her batting average it’s currently .234 but she has reached base in five of her last six games and hit .400 during that span.

With a little more than a few weeks of a snow-free Iowa City, the softball season is coming down to the wire. After Northern Iowa, Iowa will conclude the regular season with a three-game series at Pearl Field against Ohio State.

“We have UNI on Tuesday,” Gillispie said. “Having Ohio State at home with our home crowd is going to be fantastic. We want our fans to come out, be loud, and get our girls going. It’s going to be a good weekend.”