The state Board of Regents will consider hiking tuition by 4 percent for UI and ISU resident undergrads. 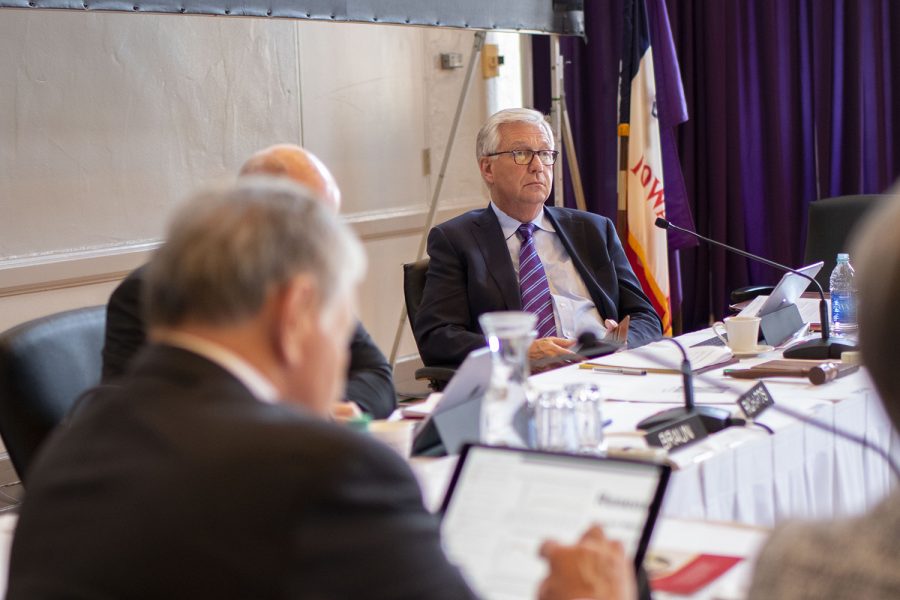 Regent President Mike Richards listens during the state Board of Regents meeting at the University of Northern Iowa in Cedar Falls on Friday, November 15, 2018.

Resident undergraduates attending the University of Iowa and Iowa State University in the fall semester may see their tuition increase 3.9 percent above the current academic year’s rates, according to the state Board of Regents’ proposal unveiled Monday.

That potential hike comes after the regents pushed for a tuition increase of 3 percent at minimum for students enrolled at those two universities. University of Northern Iowa resident and nonresident undergrads would not see their tuition rise if the regents pass these rates as proposed.

Regents established a five-year outlook of resident-undergrad tuition rates in November, announcing a tuition increase would total 3 percent if their request for state support was fully funded. Per the model, increases would fall in the 3 percent to 5 percent range if Iowa lawmakers did not fully fund their appropriations request. If the state Legislature trimmed the regents’ budget, the regents said a tuition hike would be 3 percent plus Higher Education Price Index, which was around 2 percent this year.

The regents in September passed a request seeking an $18 million increase in state support for fiscal 2020 to dedicate to resident-undergrad financial aid, but lawmakers passed a bill that would provide the regents with $12 million — falling $6 million short of the request. The boost in funding — which awaits the final stamp of approval from Gov. Kim Reynolds’ desk — is to be split among the UI, ISU, and UNI whichever way the regents decide.

After delaying the first reading of 2019-20 academic year tuition rates pending budget clarity from lawmakers in Des Moines, the regents will first discuss this proposal on Wednesday, though it is unclear when Reynolds plans to sign off on the state-funding bill.

Regent President Mike Richards said at the April 18 meeting on the UI campus the regents held off on the tuition discussion to avoid having to reset rates at a later time.

“We are not interested in setting tuition rates and then having to adjust them later,” Richards said.  “… I recognize this delay in a first reading of tuition rates is frustrating for students and families.”

In the past, the regents have set tuition rates in the fall and then increased tuition above the rates initially set in the summer after the state did not fully fund the regents’ requests for support. Lawmakers have also made midyear budget cuts to the universities, which led the UI to halt some construction projects and prompted the UI to close several centers and institutes.

In the 2018 legislative session, Iowa legislators boosted funding for the regents by $8.3 million for fiscal 2019, though that did not make up for the $11 million in funding lawmakers cut in the middle of fiscal 2018. State lawmakers trimmed more than $30 million from the regents’ appropriations over the course of two fiscal years.

Following a discussion of the tuition-rate proposal on Wednesday, the regents will take a final vote on tuition rates in June.