Zeb Adreon stepped up and so did the rest of the Hawkeye offense in the wins against Ohio State over the weekend. 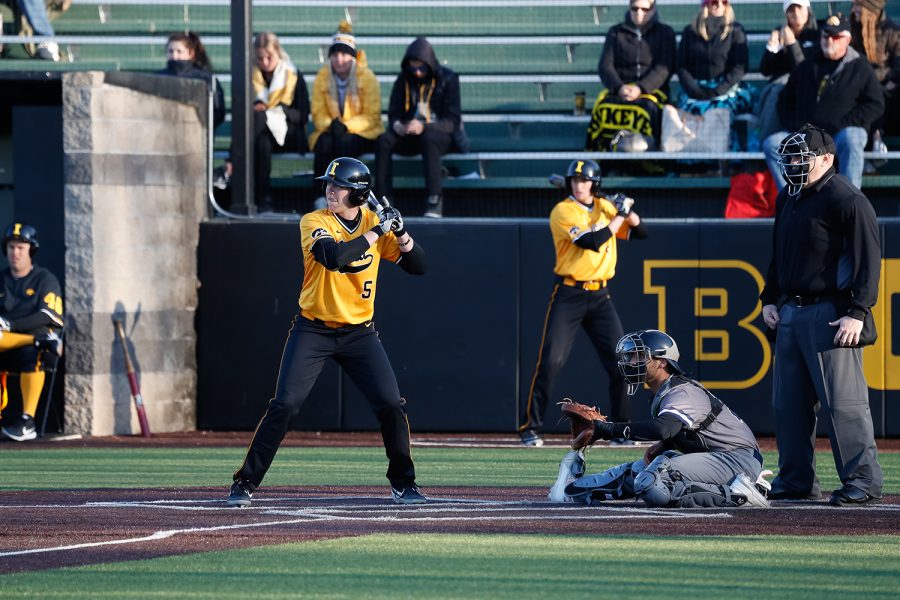 Iowa's Zeb Adreon stands in the batters box during a baseball game against Clarke University on Tuesday, Apr. 2, 2019.

Winner of six of its last eight games, Iowa baseball will host Western Illinois today at Banks Field in another midweek contest.

The Leathernecks (16-25) have lost two straight and six of their last eight matchups. Meanwhile, the Hawkeyes (26-16) enter the game fresh off a series win over Ohio State.

The series win over the Buckeyes marked the first against them since 2011, and it was Iowa’s fifth-straight series victory in conference play this season after starting the season 0-3 in the Big Ten.

After going 0-for-6 in two games prior to Ohio State, Zeb Adreon went 5-for-7 against the Buckeyes

Adreon finished 0-for-4 in Iowa’s final game to Nebraska (a loss) and 0-for-2 in a midweek game with Milwaukee (a victory), then went off against Ohio State.

In the series’ first contest, he went 2-for-3 with a pair of RBIs in the Hawkeyes’ 4-2 victory. He followed that performance by going 2-for-2 with 3 RBIs on April 27 in the Hawkeyes’ second win (11-4). It was the third time that Adreon has finished a game with 3 or more RBIs in his Hawkeye career.

He leads the Hawkeyes with a .321 batting average, appearing in 35 of Iowa’s 42 games this season. He ranks seventh on the team in hits (27) with nearly one-fifth of them coming in the past three games. His 19 RBIs rank fourth on the team.

As a whole, Iowa connected for 16 hits in Game 2 against Ohio State

Adreon had himself a day, but he wasn’t the only Hawkeye heating up at the plate. Austin Martin and Izaya Fullard each finished with 3 hits in the win.

It was Martin’s sixth game with at least 3 hits. His season-high sits at 4, which he recorded against Illinois State on April 3. Counting the final game against Ohio State, Martin has notched at least 1 hit in seven of his past nine outings.

Meanwhile, April 27 marked just the second time Fullard had recorded a 3-hit performance, with his first coming against Chicago State on March 20. His performance against Ohio State was the second conference series in a row in which he recorded a multi-hit game.

“We’re playing pretty good baseball right now, and we’re catching some breaks,” head coach Rick Heller said in a release. “We’re getting some two-out hits. It feels good. We labored a good chunk of the season where runs were tough to come by, and we weren’t getting the two-out hit with guys making plays against us. It’s turned our way.”

Iowa baseball hasn’t won five or more series in a row since the 2015 season, when the Hawkeyes won eight straight in the regular season.

The 2019 squad’s streak consists of series victories over Illinois, Rutgers, Purdue, No. 30 Nebraska, and Ohio State.

In 2015, the eight-series stretch consisted of Kansas, Indiana, Purdue, Maryland, Northwestern, Nebraska, Michigan, and Minnesota. That season, the Hawkeyes finished with a 41-18 record and qualified for an NCAA regional.