The Iowa New Play Festival celebrates fresh perspectives from up-and-coming playwrights who are part of the UI Playwrights’ Workshop. 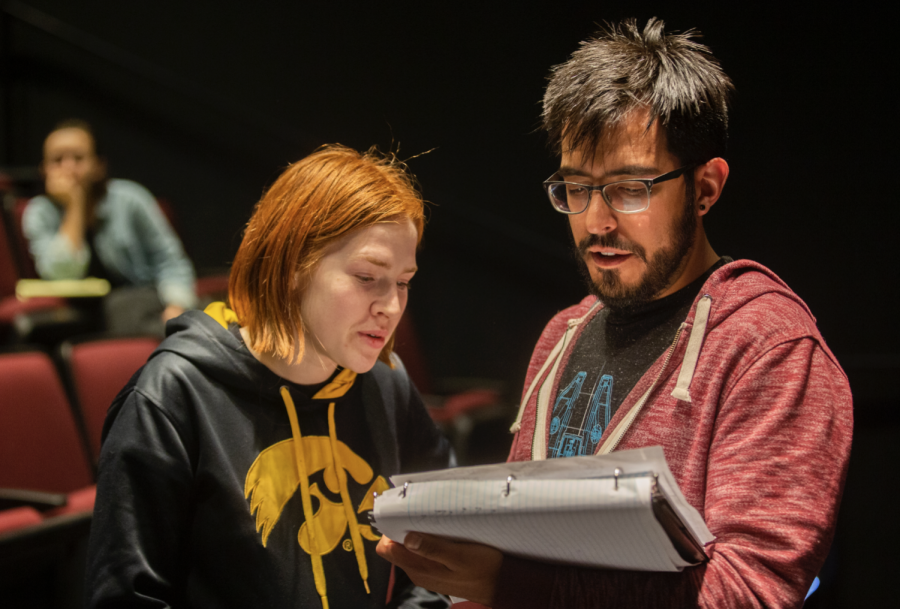 The University of Iowa is particularly famous for its writing programs, including writing plays. Every year, local theater and new-play fanatics gather to celebrate new playwrights in a weeklong festival, the Iowa New Play Festival.

From April 29 to May 4, the New Play Festival will première four full productions, as well as readings and roundtable discussions. The productions this year are 2 p.m. in Faith, Nebraska, Bell at the Back of Her Throat, Blackberry: A Burial, and P o l a r i s (a tragedy expansion pack). Tickets are free for UI students, but must be obtained prior to the events at the Theater Building.

“New Play Festival is this crazy time in the Theater Department when we produce four brand-new plays and a bunch of readings, all of which are never-before-produced scripts,” said Lila Rachel Becker, director of 2 p.m. in Faith, Nebraska. “The process involves work on the script, where the playwrights refine their work. [Then] the entire department pitches in to act, direct, produce, build scenery, design, and crew the shows.”

“New Play Festival is a weeklong, superhuman theater binge,”  Peterson said in an email to The Daily Iowan. “It’s a week of no sleep and impossible schedules, and it’s the best time of year. It’s raw creation, and community support, and peer celebration.”

2 p.m. in Faith, Nebraska was inspired by the human nature of curiosity and the tendency to ask questions.

“2 p.m. in Faith, Nebraska is a comedy exploring the many facets of faith and the nature of belief,” Peterson said. “What happens when we face something that can’t be explained? Can lost faith ever truly be regained? It’s about our basic human need to make connections in any way possible across various forms of isolation. It’s funny, fast-paced, and touching.”

Because the New Play Festival occurs annually, a variety of pieces have premièred.

“Every year when it comes around, I think a lot about the value of doing it,” said Associate Professor Art Borreca, the festival coordinator. “We do it every year, because it’s something that we’ve always done now, and it’s something that we expect ourselves to do, but I’m always surprised at how exciting it is in terms of the kinds of plays that people are writing and then bringing the guest artists.”

Through the festival, the juxtaposition of several very different plays further celebrates the variety of content.

“I think that it’s important to kind of call attention to kind of the range of writers and kinds of writing that we have,” Borreca said. “Doing several of them at once creates a particular vibe around it that’s very positive.”

Charles Green, an M.F.A. student in he Playwrights’ Workshop, wrote P o l a r i s based on his interest in exploring mechanisms of grief.

“My goal with this was to recreate the dynamics of Narrative Exposure Therapy, allowing the audience to enter a cognitive space in which memories become active,” he said.

This variety, however, does not seem to take away from the plays; the unique viewpoint of each play seems to enhance the audience’s experiences of other plays rather than imply or suggest a competition among different works of art.

“All of the plays in the festival are stellar,” Green said. “Each has a unique perspective and aesthetic resonance that rip straight through the bloated and sterile expectations of what American theater is today.”

Both for the technical aspects and for the theatrical, “magical,” elements, Peterson said, it is highly recommended that students and community members alike attend the New Play Festival.

“It never ceases to amaze what theater people are able to do under condensed deadlines,” Peterson said. “It’s a good reminder that there’s magic left in the world. We are not alone. We need to be reminded of all our shared stories. Nothing but live theater can foster empathy in quite the same way and celebrate doing our best in challenging times.”