Both Hawkeye tennis teams are focused on advancing after receiving bids to the Big Ten Tournament. 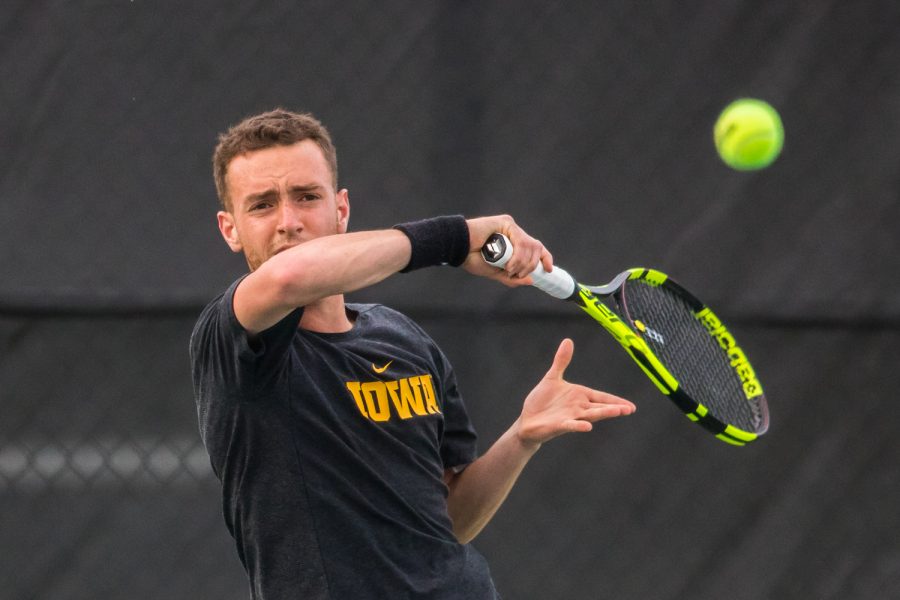 Iowa's Kareem Allaf hits a forehand during a men's tennis match between Iowa and Illinois State at the HTRC on Sunday, April 21, 2019. The Hawkeyes defeated the Redbirds, 6-1.

Both the men’s and women’s tennis teams will attempt to keep their postseason hopes alive in each of their first matchups in the Big Ten Tournament.

The No. 42 ranked men’s team, the winner of five-consecutive matches, swept Nebraska on Thursday in the first round and will take on Penn State today.

Iowa entered the tournament on a high note. It concluded the season 17-9, 6-5 in the Big Ten, after besting Michigan State and former No. 19 Michigan in its final two conference dual matches.

“It is great to go into the tournament winning four matches in a row,” head coach Ross Wilson said. “Guys are confident, and we are playing the best tennis of the year.”

The Hawkeyes could not have asked for a better matchup. Earlier this season, Iowa dominated the Huskers (5-2) in Lincoln on March 10. Additionally, Nebraska finished the season poorly, winning only one of its last eight matches.

“We are feeling pretty good; tournament play is a slightly different element,” Joe Tyler said. “We have beaten [Nebraska and Penn State] before at home, but again, you can never really know in these matches; everyone’s competitive.”

In addition to toppling those teams at home, Iowa also has three victories over top-30 opponents in the Big Ten in No. 18 Minnesota, No. 19 Michigan, and No. 30 Penn State.

For the second time in three seasons, the women’s team also made the trip back to the Big Ten Tournament. Even after dropping its final two matches of the regular season against Wisconsin and Minnesota, Iowa managed to sneak into the tournament as the last seed.

“I think definitely there were a lot of quality teams fighting for that last spot in the tournament,” head coach Sasha Schmid said. “So we do feel fortunate to have gotten that spot to get in. Going forward, we don’t want to put ourselves in that spot.”

The No. 10 seed Hawkeyes faced Indiana in a rematch on Thursday, toppling the Hoosiers (4-2).

The win over Indiana came less than a month after Iowa had beaten the Hoosiers (4-3) on March 31 at home.

“It’s definitely nice having [a win over Indiana] under our belt, but it’s a new day,” Elise van Heuvelen Treadwell said. “We are playing in a different facility and most likely playing outside. There’s also a couple of changes in the lineup and stuff. Still, having that in the back of mind knowing we beat them is definitely some momentum.”

That momentum certainly carried over, but now, things get real tough. The Hawkeyes are scheduled to face No. 2 seed Wisconsin at 2 p.m. today.

Just last weekend, the Badgers topped Iowa in its final matchup of the regular season (4-2). However, the match was closer than it appeared. The Hawkeyes secured the doubles point and forced three third-sets, all of which resulted in a loss or a no-finish.