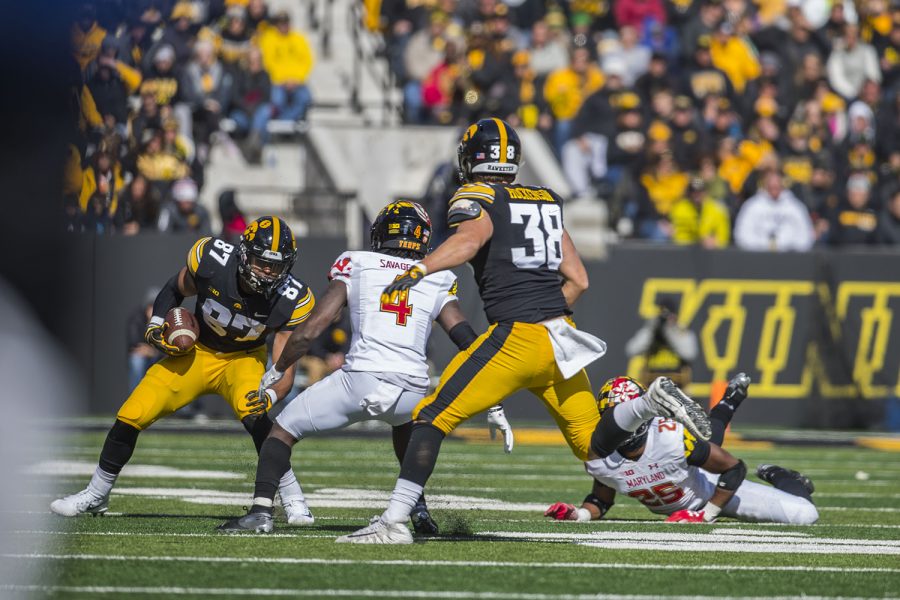 For the first time in NFL Draft history, two tight ends from the same school have been selected in the first round of the same draft.

T.J. Hockenson and Noah Fant completed the Hawkeye tight end sweep on Thursday, with Hockenson going to the Detroit Lions at No. 8 overall and Fant getting selected by the Denver Broncos at pick No. 20.

While that’s certainly an impressive achievement, it isn’t the only accolade Hockenson racked up when he heard his name called; he’s also the fourth tight end to go in the top 10 since 1997.

Hockenson serves as an all-purpose tight end, excelling as a blocker in the run game and as a playmaking pass-catcher.

The former Hawkeye caught 49 passes for 760 yards and 6 touchdowns in 2018 on his way to winning the Mackey Award, which is given to the top tight end in college football.

He’s set to make an immediate impact in Detroit.

The Lions’ depth chart listed Jesse James, Michael Roberts, and Jerome Cunningham. James hauled in 30 passes for 423 yards and 2 touchdowns with the Pittsburgh Steelers last season, while Roberts racked up 100 yards on 9 catches with 3 scores.

The need for a playmaker was there. Detroit jumped on the opportunity to add one of the draft’s most complete players. Now, Hockenson’s attention will turn to establishing a connection with Lions quarterback Matthew Stafford.

“I’m getting ready for rookie mini-camp, so I got to be there, I got to come in ready to go,” Hockenson said after Iowa’s pro day. “I’m going to do my best to dive into the playbook, learn everything I can, and get acclimated to that organization.”

Fant, on the other hand, becomes a big-time weapon for new Broncos quarterback Joe Flacco.

He was named a first-team All-Big Ten tight end by the conference’s coaches after leading Iowa with 7 receiving touchdowns on 39 receptions with 519 yards.

Fant will serve as a big-bodied, yet athletic target for Flacco. He can be a matchup nightmare for opposing defenses – too fast for linebackers to cover but too big for defensive backs.

He will likely make a quick impact in Denver as well. The Broncos’ depth chart only boasts Jake Butt, Troy Fumagalli, and Temarrick Hemingway at tight end. Butt received the only notable playing time last season, catching 8 passes for 85 yards.

“I’m OK with [being the second tight end taken],” Fant told denverbroncos.com. “Going into this draft, I wanted to go to the team that fit me, the team that wanted me, the team that I fit into their scheme. The Denver Broncos is 100 percent that team. I’m super excited and I couldn’t have asked for a better team to pick me.”

Now, Fant has the chance to become one of Denver’s most important offensive players.

“Noah Fant is an incredibly gifted and athletic tight end,” tweeted John Elway, the Broncos’ general manager and president of football operations. He’s got great speed and he can really stretch the field. We’re very fortunate to get him at 20.”