Iowa thrives at Banks Field, but three road tests against Ohio State will be a challenge. 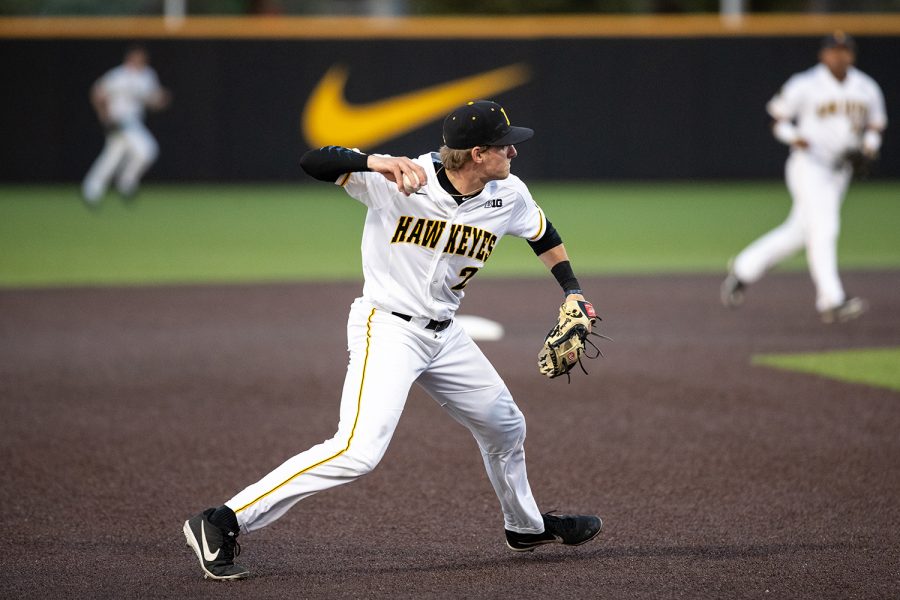 Iowa infielder Brendan Sher throws towards first base during the baseball game against Milwaukee at Duane BanksField on Tuesday, April 23, 2019. The Hawkeyes defeated the Panthers 5-4.

The Hawkeyes boast a 15-4 record at their field, and head coach Rick Heller said a variety of variables play into the Black and Gold’s home-field advantage.

“When we first got here, we tried to set the tone of ‘you don’t come to our field and beat us,’ ” he said. “That mentality has to be there. It’s the place where you practice, where you feel the best. You know the hops, you’re used to the hitting background. It just makes you feel a lot better, and our fan support has been tremendous … they’ve been very into the games, and that really helps.”

Since 2017, the Hawkeyes are 54-14 at home. In other words, nearly 80 percent of games at Banks Field have resulted in Hawkeye victories.

Life away from Banks Field hasn’t treated Iowa baseball so kindly, though. In that same time frame, the Hawkeyes have a 26-33 record on the road.

This season, Iowa has a 7-10 road record, but with a three-game series against Ohio State in Columbus this weekend, the Black and Gold have a chance to erase that sub-.500 record.

Last weekend, when Iowa took two games away from then-conference-leader Nebraska, the Huskers boasted one of the Big Ten’s best starting-pitching trios. Matt Waldron entered with a 1.76 ERA, Nate Fisher had a 2.26 mark, and Reece Eddins a 4.37.

Iowa scored 22 runs during the three-game series, making especially quick work of Fisher, showing just how explosive its offense can be.

For the Buckeyes, though, they don’t have nearly the same arms on paper. Ohio State’s Friday-Saturday-Sunday rotation looks like this: Garret Burhenn (4.21 ERA), Seth Lonsway (4.83 ERA), and Griffan Smith (3.75 ERA).

Pitching, though, hasn’t been a major issue on the road this season. McDonald had one of his best outings of the season on April 12 in a 10-4 win over Purdue in West Lafayette, Indiana. The senior arm gave up just 1 run in six innings, allowing just 4 hits.

But offensively, Iowa has struggled in road losses. In the 10 true road contests, the Hawkeyes have scored a 23 runs.

Runs were hard to come by in Iowa’s 5-4 walk-off win over Milwaukee on Tuesday, but the Hawkeyes delivered when it counted on a Justin Jenkins’ walk-off homer in the 12th.

“Well, it’s always better when you win your midweek game,” Heller said. “You feel a lot better about things.”

And feeling better is something Iowa is doing. The Hawkeyes have won six of their last eight games, including four-straight conference series.