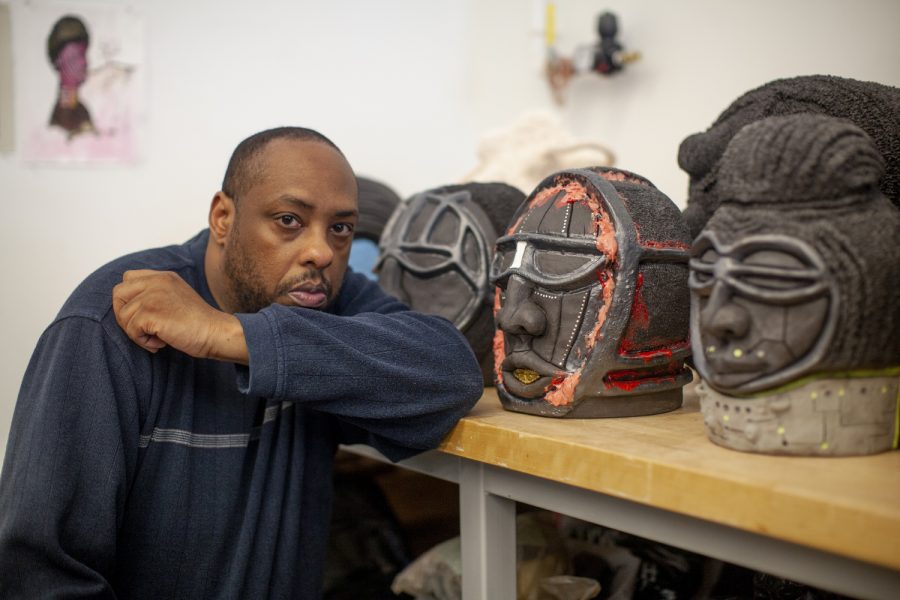 University of Iowa ceramics graduate student Donté K. Hayes poses for a portrait in his studio on Wednesday, April 24, 2019. During the event, students presented projects that combined art and engineering.

The ceramics communal studio in the Visual Arts Building was speckled with clay figurines, pots, and mugs, showing off the incredible talent of the artists in a casual way. Donté K. Hayes’ corner of the studio consisted of ceramic Benin heads, all of which had the same color scheme: black.

“I really like the look, and also I’m black,” Hayes said and laughed. “The meaning of the artwork conceptually speaks to the Black Body and their thoughts and desires in a space that may or may not be hospitable. This is why it is important to see the contrast of my artwork with the white space, institution, and our community.”

Benin heads are faces sculpted onto clay and given texture and characteristics through different pottery tools, or the artist’s hand. The art form originates in West Africa.

“I call my bust-figured sculptures True Kings,” Hayes said. “They are inspired by Benin heads and astronaut helmets. Oba meaning king, in the Benin language of the West Africa region in the modern republics of Benin, Nigeria. Most likely, the enslaved Africans were from the region of West Africa. The schools I attended did not teach us about their culture, their empires. I had to learn this on my own.”

At the infancy of his artistic career, Hayes began printing pineapples, but not because he’s from Hawaii. The fruit’s origins are actually traced back to South American, then the American South, where Hayes is from.

“Pineapples were put in front of people’s homes to welcome everyone,” he said. “But they were also put on the docks when new shipments of enslaved African would arrive. So it’s ironic, because that’s not hospitality, the slave masters and slave trade only saw bodies on those ships, not human beings.”

Hayes’ love for science fiction shows in his workplace. Daleks, a fictional being created in BBC’s television series of “Doctor Who,” can be seen amid the Benin heads.

“My research is in hip-hop culture and Afrofuturism,” he said. “I describe Afrofuturism as a projected vision of an imaged future which critiques the culture and history of the African Diaspora. When the enslaved Africans went to the New World, for them, it was like going to a whole new planet. They became astronauts or what I refer to as Afronauts.”

Hayes heard of the top-notch art program at the University of Iowa, but he also knew of the artistic talent and community of Iowa City. The artist drove 12 hours from Atlanta to Iowa City without having paid a visit beforehand.

“I wanted to be a part of the community,” he said. “When I first got here, I dropped my stuff off at my apartment and was at Public Space One by 2:30. I started volunteering, and I’ve been here since August of 2017.”

Now pursuing an M.F.A. in ceramics with printmaking minor, Hayes teaches ceramics courses at the UI. On May 11, he and his colleagues will present their work at Public Space One.

“You learn something from students, and you give them the motivation and inspiration to make art,” Hayes said.