You, Me, and the rise of STDs

STDs are on the rise, nationally and on the UI campus, but barrier use at the UI is low. Why? 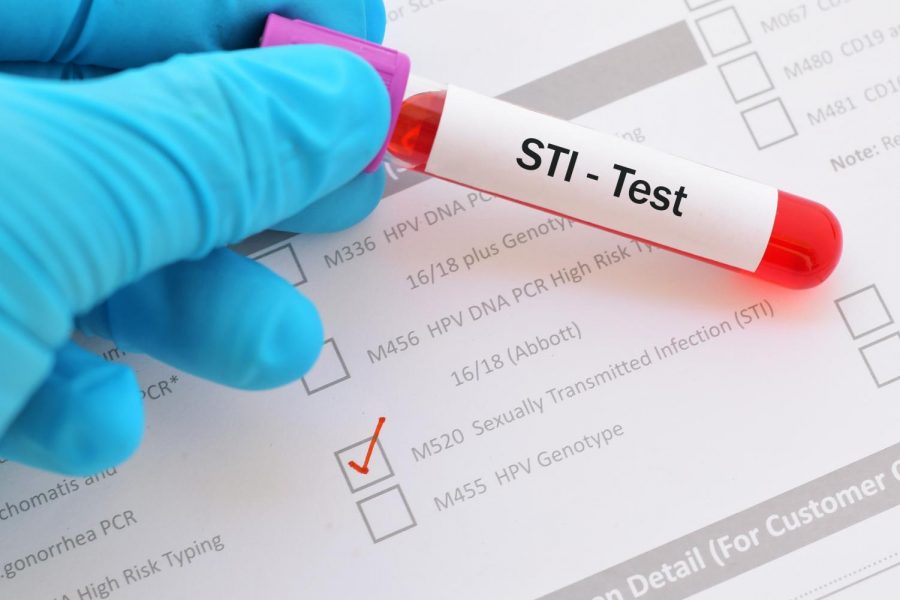 Of the plethora of emails sent to University of Iowa students rolling in throughout the day — spam, marketing, student-organization recruiting — one is particularly eye catching.

A held breath, a click through, and the instant sigh of relief.

STDs/STIs, or sexually transmitted diseases, are one of the many issues young adults face, potentially for the first time, in college. The Centers for Disease Control & Prevention in 2017 reported that STIs were at an all-time high, with more than 2 million cases of chlamydia, gonorrhea, and syphilis reported in 2016 in the United States.

The amount of STD testing among young people nationally is remarkably low, with the American Sexual Health Association reporting that only 12 percent of young adults having been tested in 2016. On campus, however, the UI is battling national trends.

“We are testing more students for STDs than in the past — likely because of increased awareness and offering it during women’s gynecological exams,” said Lisa James, the assistant director of Quality improvement and strategic communication for UI Student Health, in an email to The Daily Iowan. “We also offer a relatively new service in which a student doesn’t always need an appointment with a provider but can see a Student Health RN for screening, testing, education, and results.”

On campus, chlamydia is the most-diagnosed STI. Johnson County has the third highest rate of chlamydia in Iowa, with 1,017 cases in 2017, behind Webster and Black Hawk Counties, according to the Iowa Public Health Tracking Portal.

Of the major STIs, four are curable, according to the World Health Organization:  syphilis, gonorrhea, chlamydia, and trichomoniasis. The New York Times reported in March that the second person ever was cured of HIV, a disease that used to mean a death sentence for those infected.

So why might students not use protection or get tested for STIs?

James said there are a variety of reasons.

“[It is] lack of knowledge, lack of condom availability (we have baskets of free condoms in our clinic and the Campus Rec , including female condoms and dental dams, and RAs also have them for the residence halls), impaired judgment and decision-making due to drugs or alcohol, unassertiveness or fear to ask a partner to wear a condom, just taking a chance that they won’t get an STD this one time,” she said in an email to the DI.

UI senior Maegan Tyrrell, the fundraising coordinator for IC RED, an organization on campus focused on raising awareness of HIV/AIDS, said a big reason people might not get tested is the stigma attached to STDs.

“People still aren’t comfortable talking about sex; it’s still a taboo topic in our society,” she said. “I think the fact that someone talking about that experience and saying, ‘Oh no, it’s fine you should go do it’; it just seems unnatural for someone to want to talk about. Really also part of it is just changing the language of it.”

Tyrrell said that she and her colleagues typically use the abbreviation STI instead of STD, because the word disease has a connotation that it is not curable. While some diseases, like herpes, are not curable, they are manageable with medication.

“Go get tested, once a year, at least or every time you have a new partner,” Tyrrell said. “Just go get tested; there’s a lot of peace of mind knowing that you’re fine and that your partner is fine rather than just chancing it and being scared or anxious about ‘What if I do have this?’ and pushing it down.”

UI freshman Rebecca* used to not wear condoms when she had sex.

“You don’t want to use them, because its more fun,” she said. “Yeah it does feel good, and most of the time you’ll find guys don’t come with one or say ‘let’s not use one.’ ”

Rebecca changed her stance on condoms after contracting gonorrhea.

“I did take it seriously. It wasn’t so much I was afraid, it was just, ‘is it going to go away after I take the treatment?’ ‘am I going to get it again?’ ” she said. “I have to admit I’ve gotten with a couple of people, so just finding out who gave it to me, because the state calls you and you have to get names.”

“The most nerve-racking thing is telling your parents,” she said. “My dad doesn’t know, but my mom was just a little disappointed I didn’t know who it was, but she realized it’s college, and stuff like this happens.”

Since she started using condoms —latex-free ones, she notes— she hasn’t noticed a negative difference in her sex life.

“Know who you’re sleeping with, even if it’s just a first name, and have contact info in case something like this were to happen,” she said. “Go get tested, especially since it’s on the rise. Wait like a week and then go in.”

Addie Zwick, the founder of Student Advocates for Planned Parenthood on the UI campus, said her group works to encourage students to talk about their sexual health and get tested.

“We really encourage our members at meetings to feel comfortable talking about sexual health and to encourage their friends to do the same,” she said. “We’re looking to create this culture of acceptance and celebration of health and sexuality on our campus and part of that entails trying to prevent STDs and just generally being safe.”

The organization hosts events throughout the year regarding STD prevention and the promotion of safe-sex practices, including condom crawls downtown, in which members will visit bars downtown to hand out protection.

“I think the media and U.S. culture in general has really glorified this idea of ‘you’re not a real man if you use a condom,’ ” Zwick said. “There’s a lot of people who are like, ‘It feels better without a condom,’ and they don’t want to deal with that. More generally speaking about barrier methods, dental dams are an option as well, but I’ve never encountered anyone who has used a dental dam, and I think that’s probably because they’re not discussed.”

Anything outside the heteronormative is not usually discussed, she said, on top of discussing sex and STDs still being considered taboo. Only 6 percent of students reported using a barrier method during oral sex, despite STDs still being spread that way.

“There’s sort of this popularized notion that sex is always better without a barrier method, and that doesn’t have to be true,” Zwick said. “It can be true if you’re not doing it correctly, but in my mind, it’s better to have safe sex and not contract STDs than to not use a barrier.”

Another aspect potentially affecting condom use among college-age students is the boom of IUD use among women in the U.S. In 1995, only around 1 million women used IUDs; currently, around 4.4 million women use them, according to a 2018 research paper from Contraception journal.

A 2018 article by The Economist cites IUD use as a reason for people potentially not using barrier methods, because without the risk of pregnancy, condoms are only necessary for STD protection. James agreed this could affect condom use on campus.

“There is potential for that, where students are more concerned about pregnancy and don’t take the risk of contracting an STD quite as seriously,” she said.

Zwick said the more knowledge people have, the more able they are to make safe and healthy decisions, and students have the responsibility to themselves and their sexual partners to get tested.

“I think a lot of people don’t have an understanding of the prevalence of STDs, and so they think, ‘Oh, that’s something that happens to other people, I don’t have to get tested,’ until it happens to you,” she said. “I think it’s just still seen as taboo — people have this idea that if you get STDs, you’re dirty or whatever, but STDs are super-common. Most people get one at some point. I think it’s very silly that it’s not talked about more.”

*Names have been concealed due to the sensitive subject matter.