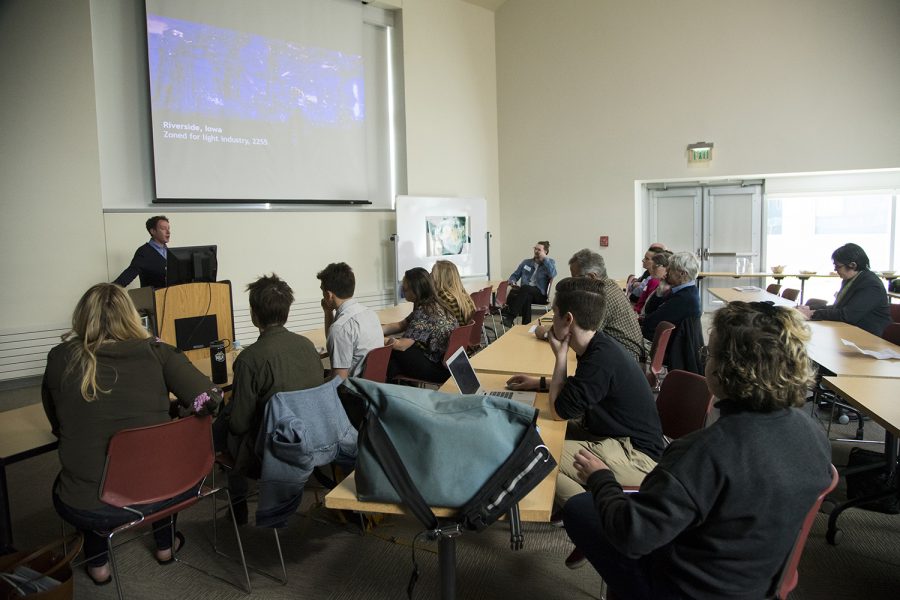 Students and judges listen to a presenter at an undergraduate presentation on City Planning for eight generations in the future in the advanced technologies building on April 24th, 2019. (Michael Guhin/The Daily Iowan)

Elevated trains, vertical and horizontal farming, and transportation bubbles are all ideas of University of Iowa undergraduates envisioning a better Iowa City in the year 2228.

On April 24, 10 UI students presented their long-term visions for Iowa City as America’s Next Generative City. The course, brand to the UI and what is believed to be the first undergraduate course worldwide on regenerative city planning, is taught by faculty members Lucie Laurian and Scott Spak.

The course’s title is Eight Generational Planning — Envisioning Cities for the Year 2228. That is the year in which Capt. James T. Kirk of Star Trek Trekkies speculate will be born in Riverside, Iowa, a date that is a distant future yet relevant to Iowa, Laurian said.

“It is a TILE class,” Laurian said. “It is a very unusual way of teaching, but it gets students to interact and work together. It is a very studio-based, project-based course.”

Laurian said the general framework of the class is to think of how people have reached the age of humans dominating the way the environment works.

“Within that, we are thinking very large-scale change,” Laurian said. “If you think about 200 years ago what Iowa City was like, there was tremendous change in those 200 years.”

She was speaking figuratively, of course, because 200 years ago, Iowa City didn’t exist.

Laurian said the use of the term “regenerative” sets the course apart from others.

“Regenerative cities are so much more than sustainable cities,” she said. “To sustain means you do no harm. To regenerate means we do better, and we make the environment better — regenerate to a higher level of resilience, of ecosystem management, and of happiness and good people as well.”

Laurian described the current values as being in line with that of the current City Council and Iowa City Mayor and UI Professor Emeritus of urban planning Jim Throgmorton, a judge of the final presentation and frequent speaker to the class.

Every student was given four minutes to present, then peppered with questions from a panel of judges. Presentations focused on transportation, long-distance transportation, more local transportation methods, food systems, farming, buildings, streets, and human interactions with changes.

“This course has really taught me to think out of the box,” she said. “We operated under the assumption that we had no resources in terms of money, which is really kind of hard to wrap your head around. It is a little jarring at first — you really get to be creative, which I never really had that opportunity in a college course.”