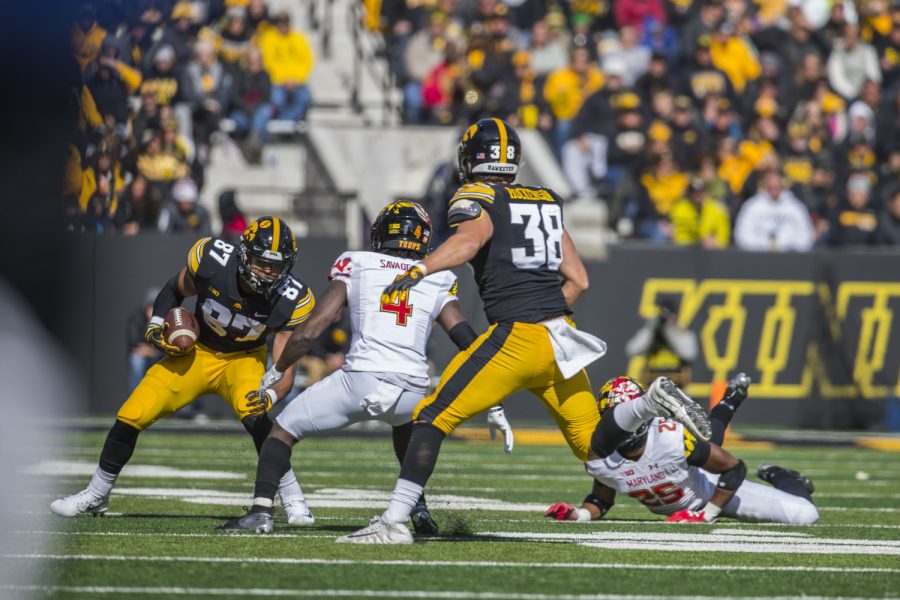 Point/Counterpoint: Which Hawkeye tight end should be drafted first?

Noah Fant and T.J. Hockenson are both projected as first-round picks in the 2019 NFL Draft. Two Daily Iowan staff members debate which one will hear his name called first.

The NFL Draft kicks off tonight in Nashville, Tennessee, in what should be a great PR night for the Iowa football program.

Both Hawkeye tight ends, T.J. Hockenson and Noah Fant, are locks to go in the first round, and it looks as if they will both be gone by pick No. 20.

The only question is, who will go first?

Both Hockenson and Fant have showcased why they are NFL-caliber players, but if I was submitting a pick on tonight, I would write Hockenson’s name.

It is almost a consensus among draft analysts that Hockenson is the top tight-end prospect in this year’s draft, with NFL.com draft analyst Daniel Jeremiah going as far to call him the “safest pick in the draft.”

Hockenson certainly has the potential to back up that title. He fits perfectly the mold of what a tight end should look like in today’s NFL.

At 6-5, 250 pounds, Hockenson has the frame and the strength to be both a mismatch against linebackers and safeties in the passing game and a devastating blocker in the running attack.

The running game is perhaps where Hockenson is at his strongest. Not many tight ends have highlight videos dedicated to them pancaking opposing defenders, but he is not like many tight ends.

Between the impressive film he has in his back pocket and a solid Combine performance, he has received favorable pro comparisons. Another NFL.com draft analyst, Lance Zierlein, compared the John Mackey Award winner to Kansas City Chiefs’ standout Travis Kelce.

Not a bad-looking comparison at all.

Picking between Fant and Hockenson is a win-win scenario, because either way, you get one of the next great Hawkeyes from “Tight End U.”

If you’re an NFL general manager in need of a tight end, congrats — you’ve come to the right place.

But being an NFL general manager also comes with its caveats, such as deciding whether to pick T.J. Hockenson or Noah Fant in the NFL Draft.

While Hockenson is certainly an all-around tight end ready to take on the league right now, Fant may be the better option in a pass-heavy offense.

In a league that relies on the air attack, Fant projects as a matchup nightmare — a big-bodied tight end with speed who is too fast for a linebacker to cover but too big for a defensive back.

In the past two seasons, Fant has hauled in 69 passes for 1,013 yards, and 18 touchdowns with fairly consistent stat lines across the two years.

He scored 19 touchdowns in his career, the most for a tight end in Hawkeye history and the third-most among Big Ten tight ends all-time.

Over the past two years, Fant has scored numerous touchdowns in a game four times. He’s a scoring machine, whether it’s catch-and-run or in the red zone.

At the same time, though, Hockenson is a monster in the ground game and has playmaking ability as well.

Either way, it will be next to impossible for a GM to mess this pick up. But in today’s pass-happy NFL, Fant might be the better option.