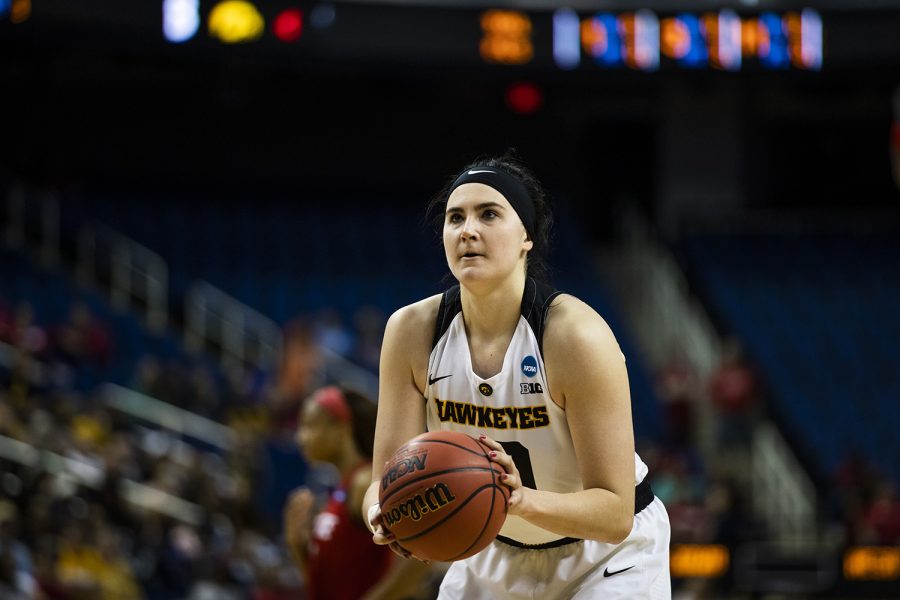 Iowa center Megan Gustafson prepares to shoot a free-throw during the NCAA Sweet 16 game against NC State at the Greensboro Coliseum Complex on Saturday, March 30, 2019. The Hawkeyes defeated the Wolfpack 79-61.

Throughout the morning, Gustafson took photos with senators. Upon leaving the Capitol, Gustafson ran into a group of sixth-graders on a field trip from Ankeny.

“[Megan’s] the best player in the country,” Iowa guard Makenzie Meyer told The Daily Iowan on April 1. “It’s amazing to have played with her, but people don’t realize the type of person she is off the court. One of the best teammates I’ve ever played with, so unselfish, so hard-working. We’re going to miss [her].”

On the Senate floor, Sen. Zach Wahls, D-Coralville, honored Gustafson for her accomplishments.

“The Senate hereby recognizes and congratulates Megan Gustafson for her outstanding career at the University of Iowa and wishes her continued success during her Women’s Basketball Association career,” he said.

Welcome to the Iowa Senate @GustafsonMeg10! Proud to be honoring the greatest Hawkeye to ever pick up a basketball. #GoHawks. pic.twitter.com/vOlEBIkBc3

Walked out of the State Capitol Building this morning and ran into a group of 6th graders from Ankeny on a field trip. They were all in absolute awe of @GustafsonMeg10! The impact she’s made on this state is quite remarkable! #Hawkeyes #FightForIowa

Not too often in life do you get to meet your hero. Thank you ⁦⁦@GustafsonMeg10⁩ for taking a minute to make this girls day!! pic.twitter.com/MT5Ll2gvJs

We had a whole lot of spirit celebrating humble @GustafsonMeg10 in the Senate Chamber today. She is a true inspiration to young women that goals are achievable! We laughed about the difference of 5'10" & 6'3". pic.twitter.com/DP2jj6ZbFT