With a doubleheader tonight against Nebraska, Iowa softball will rely on DoniRae Mayhew to power the bats and the team past the Cornhuskers. 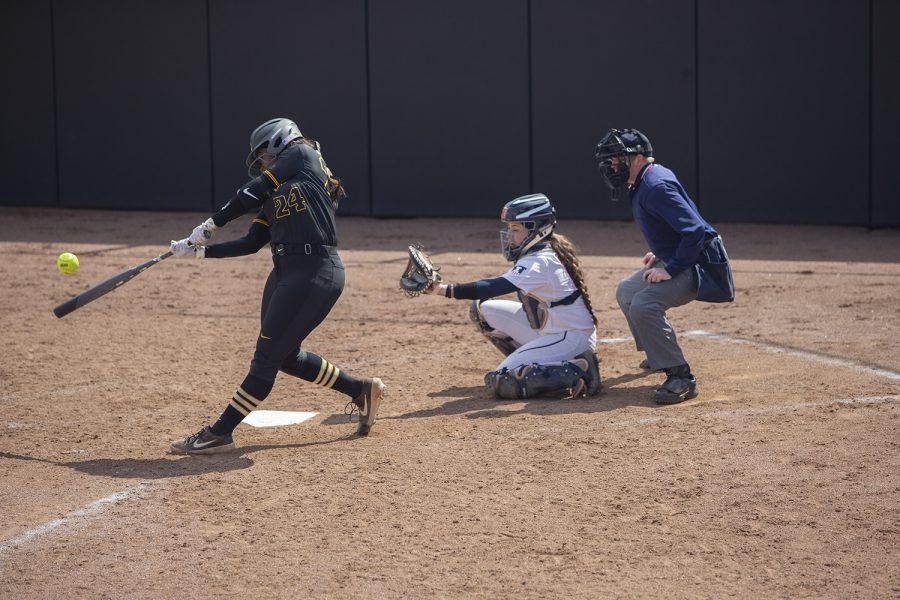 Iowa infielder Donirae Mayhew lines up to hit the ball during the first game in a double header against Illinois on Saturday, April 13, 2019. Mayhew hit a home run. The Hawkeyes fell to the Illinis 12-11 but came back to win the second game. (Jenna Galligan/The Daily Iowan)

As Iowa softball gets set to take on Nebraska in a doubleheader today, the Hawkeyes are desperately looking for a way to get more runs across home plate.

Scoring has been a problem all season long for the Hawkeyes, but it’s a problem that has worsened since the start of Big Ten play. In conference play, Iowa ranks last in the Big Ten in runs scored per game (2.1) and batting average (.189), both by significant margins.

Although true that pitching has kept Iowa in games, the spaghetti-bat epidemic isn’t endemic for the entire Hawkeye squad.

Leading the way for the Hawkeye lineup so far this year has been junior-college transfer DoniRae Mayhew.

Mayhew played the first two years of her college career at Kirkwood, where she amassed 30 homers and 90 RBIs along with a .446 batting average in just 59 games.

Her career in Cedar Rapids ended with Mayhew being honored as Junior College Player of the Year. That was the result of Mayhew’s hard work and dedication off the softball diamond.

“I put forth a lot of effort outside of softball to better myself and better my skills, and that showed this past spring,” she said. “I did a lot of softball training on my own, and I took it upon myself to become healthier, lose weight, and get stronger. All of those things helped me have a great season.”

After her stellar final season at Kirkwood, the time came for Mayhew to fulfill a lifelong dream of playing softball at an elite level.

“I had always dreamed at playing at a Division-1 school,” Mayhew said. “Finding a place where I could do that and be close to home would be perfect for me. Deciding to come to Iowa was the best decision for myself that I could have made.”

So far, bringing in Mayhew has seemed like a solid decision on the part of the Hawkeyes as well.

While most of this spring Mayhew has ripped the stitches off the ball, she got off to a slow start to her Iowa career.

This past fall — and early this season — Mayhew had trouble adjusting to Division-1 softball and managed just 1 hit in 16 plate appearances.

“In the fall, I think she was nervous and she was holding back,” assistant coach Trena Prater said. “She was trying to adapt from junior college and adapt to our new system. She struggled a little bit in the fall, but in the end, I think she came into her own. This spring, she has blossomed into being the Junior College Player of the Year we think she is.”

Hawkeye fans hope Mayhew can continue to pace the Iowa lineup and be the catalyst for others to start hitting around her.

For now, Iowa prepares to host the Cornhuskers in a doubleheader beginning 4 p.m. today at Pearl Field.