Megan Gustafson will forever be a part of Carver-Hawkeye, as Iowa athletics director Gary Barta announced her number will be retired at a later date. 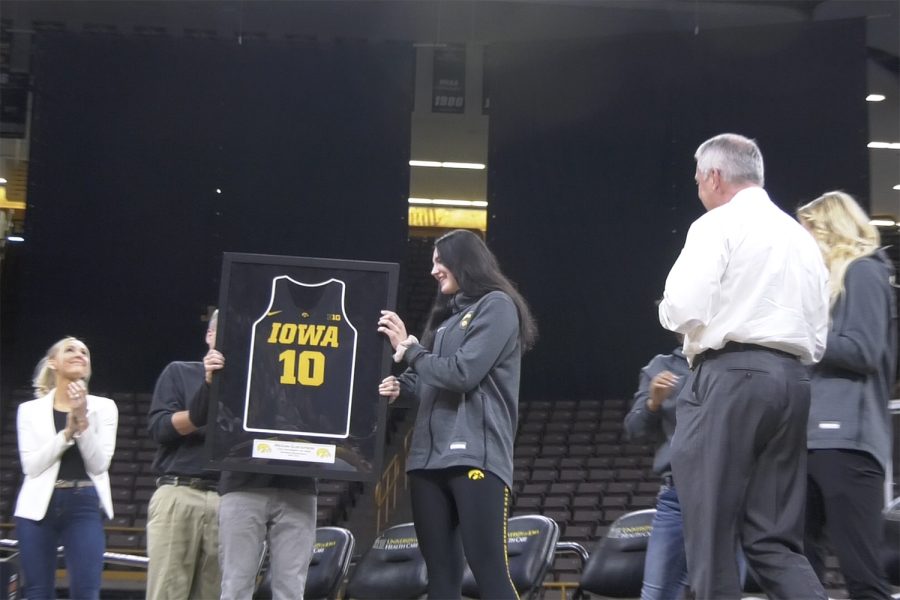 Megan Gustafson holds her framed jersey, which will be retired.

Megan Gustafson’s legacy will be a part of Carver-Hawkeye forever. Gustafson’s number will be retired at a later date, Iowa athletics director Gary Barta announced at the team’s end-of-season celebration on Wednesday.

Gustafson will become just the second player in Iowa history to have her number retired, joining Michelle Edwards’ No. 20 from 1988.

I was not expecting that,” Gustafson said in a release. “It’s super special to celebrate my team and what we’ve been able to accomplish this year. This is something I’ll never forget for the rest of my life. But again, I have to thank my teammates and my coaches. They have made me into the player and the person that I am.”

The accolades came after leading the nation with 27.8 points per game on 69.6 percent shooting. She also became just the fourth Division-1 women’s player to drop 1,000 points in a season.

Gustafson holds 16 Iowa program records as well. In addition to her unparalleled season, Gustafson has scored more points (2,804) in Hawkeye history than any player to take the floor on the men’s and women’s teams. She also ranks first with 1,460 rebounds in her career.

The fan support for Gustafson and the rest of the Hawkeyes was there as well, after Iowa made its first Elite Eight appearance since 1993.

“You guys have been there for us all year long, and we’re so appreciative of you,” Iowa head coach Lisa Bluder said to the fans at the celebration. “I know it’s been said, but 23,000 here for the NCAA record attendance of all-time. That’s amazing.”

The Hawkeyes, who earned a No. 2 seed in the NCAA Tournament after winning the Big Ten Tournament, toppled Mercer and Missouri in the first and second rounds of the NCAA Tournament – hosted at Carver-Hawkeye – before taking down North Carolina State in the Sweet 16. Iowa then fell to eventual national champion Baylor in the Elite Eight.

Although the Hawkeyes didn’t quite make the trip to the Final Four in Tampa, the season will still go down in history – just like Gustafson’s career, which will forever be under the lights of Carver-Hawkeye.