The Virginia A. Myers NEXUS of Engineering and the Arts uniquely approaches a collaboration between the two areas through student support and opportunity. NEXUS hosted its first open house to showcase student work, an initiative that the program hopes to continue annually. 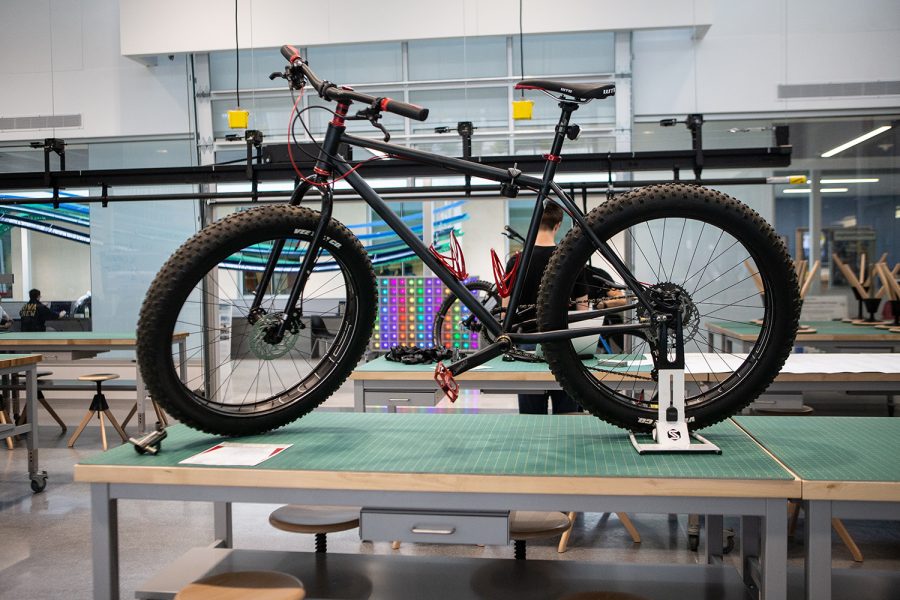 A hand made bike is seen during the Nexus Open House at the Seamans Center in Iowa City on Wednesday, April 24, 2019. During the event, students presented projects that combined art and engineering.

For the first time, the NEXUS presented an open house on April 24 showcasing student work.

“We’d like to enlarge this idea of collaborations between arts and engineering. It will benefit everyone,” NEXUS program manager Deanne Wortman said. “We’re unique, and we should celebrate that.”

“It’s valuable for everybody because it allows all who participate to widen their perspectives, ask better questions, and therefore come up with better answers,” Wortman said.

The handmade student-bike parade was a collaboration with the UI School of Art and Art History, which involved a parade from the Visual Arts Building to the John Deere Plaza at Seamans. A mural was painted in the Office of Sustainability about global-water issues.

“The idea we were given was an art piece incorporating different engineering and interaction aspects,” O’Hearn said. “The general aim of this project was to show how to incorporate art in engineering. It’s great exposure.”

Kapo was eager to show off the finished product after a semester of troubleshooting and creativity.

“I would encourage all engineering students to try art,” Kapo said. “Engineering is art because by thinking creatively, you can troubleshoot. It completes you.”

“Crash Dance” was inspired by research occurring in the College of Engineering with the National Advanced Driving Simulator about driverless cars. Dance Assistant Professor Christopher-Rasheem McMillan created a performance with 15 dancers moving around without crashing into one another, Wortman said.

Jason Snell, a graduate of the UI, used an EEG and EKG to read his body rhythms and compose music with his mind. Poster displays, refreshments, a deconstructed piano, and puzzles were featured and open for viewers in the NEXUS studio.

RELATED: Iowa Baja shows off newest off-road vehicle for national competition in May

NEXUS hopes to make this event happen annually and to encourage more engineering students to get involved in the arts, Wortman said. A big challenge is many students don’t know there are creative opportunities in the engineering field. NEXUS hopes to change that.

“The strictly technological solution is not always the best for human beings,” Wortman said. “It humanizes and widens the perspectives of engineers when they go out and make a new world for the rest of us. These students can continue to enjoy the whole range of opportunities. We care about these students having full and productive lives when they leave here.”