Brings Plenty: We can mourn Notre Dame and other religious tragedy’s together

We can mourn the burning of Notre Dame and other religious tragedies together without minimizing or completely ignoring any of them. 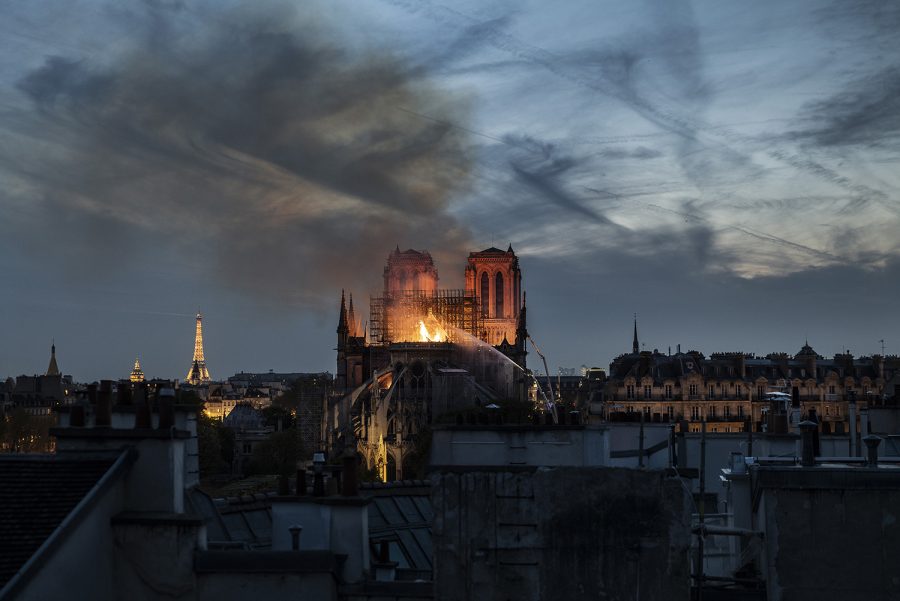 Smoke and flames rise from Notre-Dame Cathedral on April 15, 2019 in Paris, France. A fire broke out on Monday afternoon and quickly spread across the building, collapsing the spire. The cause is yet unknown but officials said it was possibly linked to ongoing renovation work.

The world watched as the Notre Dame Cathedral in Paris caught fire on April 15. The roof was destroyed as well as the iconic spire. Most of this was caught on film and was widely spread across social media. And while some people reacted with sympathy and heartache to the tragedy, others reacted with much less emotion.

Some made comments such as “Whatever, it’s just a building.” Others noted that indigenous and Muslim religious buildings, monuments, and lands have historically been destroyed with malicious intent, but people don’t seem to care as much about them as they do about Notre Dame. Personally, I believe we can mourn these equally without putting one down or minimizing any of them.

There have been several shootings at mosques around the world, and several black churches in Louisiana have burned down in recent weeks. However, these don’t receive the same amount of news coverage or heartache by the general public. The reasons for this stem from discrimination against non-Christian religions and that Western society tends to be Eurocentric. This means Christian and European tragedies — while no less horrific than non-Christian or non-European tragedies — take the spotlight. As a result, people don’t often think about Native American communities still begging that their religious and culturally significant lands and monuments be preserved or remember that mosques and cultural landmarks in Israel are being jeopardized by constant warfare. Examining and being aware of this is important, and it’s vital to mourn these religious and culturally significant buildings.

Conversely, those saying that Notre Dame is “just a building” are being unnecessarily heartless. Notre Dame represented more than 800 years of culture, art, and history, and some of that was destroyed in the blaze. The fire occurred during Holy Week, and this is extremely important for Catholics. For the French Catholics who frequented that church, seeing this religious and historically rich building burn right before their eyes must have been devastating. On top of this, Notre Dame is a staple of Parisian architecture and is an iconic part of the city. The building was saved from destruction by Victor Hugo in 1831 when he published his classic novel The Hunchback of Notre-Dame. Examples such as this prove that Notre Dame was important not only religiously, historically, and artistically, it was also important to the French and Parisian identity.

Overall, I don’t think we should discount any of these religious or cultural tragedies. They’re all painful to different groups of people for different reasons, and I believe we need to respect that. Showing respect to one another, even by showing sympathy toward each other, can help the healing process after these tragedies.