Anthony Nelson’s production increased every year with the Hawkeyes. Now, he wants to continue that trend in the NFL. 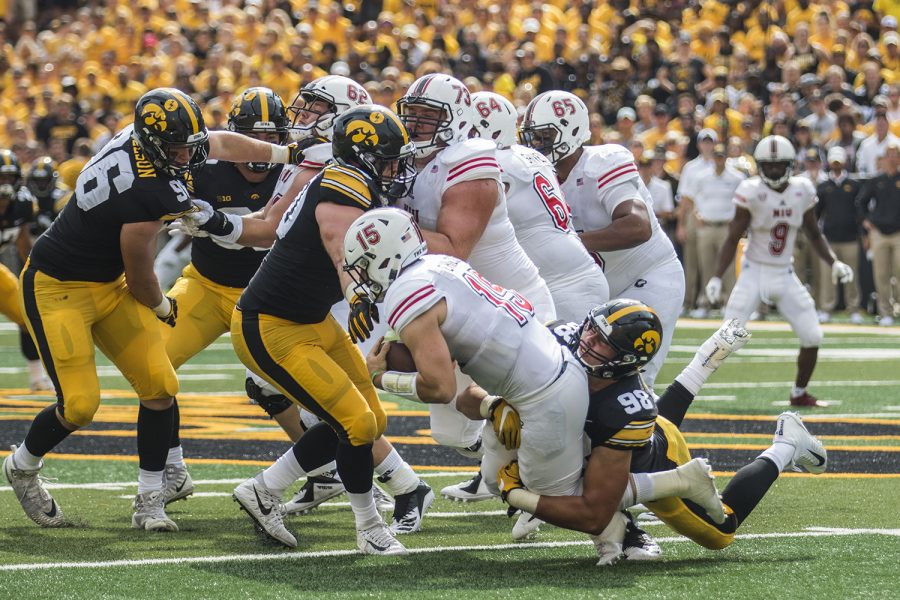 Look at the Big Ten statistical leaders from the 2017 season, and under “sacks,” Iowa fans will see something familiar: Anthony Nelson, 8.

Check the 2018 stats now, and something similar happens toward the top of the list: Anthony Nelson, 10.

Two years in a row, Nelson ranked in the top five of the Big Ten, registering 18 sacks in his final two seasons with the Hawkeyes. It’s safe to say he impressed people in his two years as a starter.

In his redshirt freshman season, he played in 13 games and started one in 2018, posting 6 sacks.

Now, he’s looking to take those talents to the NFL after foregoing his senior season to enter the 2019 draft.

“Just keep getting better — that’s all I can control at this point,” Nelson said. “I’ll be blessed to have the opportunity wherever I end up, but I’m just trying to make sure that when I get there, I’m going to make a difference.”

Standing 6-7, Nelson possesses potentially game-changing length with the ability to knock down passes at the line. He defended 6 passes in his three-year career, 4 in 2017.

That length, combined 9 his quick release from his stance, also helps him drive offensive linemen back.

“Power is the name of the game for Nelson, who is a classic bull rusher, extending his long arms into blocks and grinding with his leg drive,” the Athletic’s Dane Brugler wrote in his 2019 NFL Draft guide. “… Overall, Nelson is a tightly wound, predictable pass rusher, but he has the length, competitive makeup, and raw power to soften the edge, projecting as a base end in a four-man front who can reduce inside on passing downs.”

Brugler and NFL.com’s Lance Zierlein also noted Nelson’s deficiencies when it comes to his pass-rush plan. Nelson showed his affinity for bull rushing during his time with the Hawkeyes but didn’t display the arsenal that some other prospects have.

“He flashes, but he didn’t play against top-level right tackles, and some of his tape is just bland against average guys,” an unnamed director of scouting for an NFC team told NFL.com. “I need to see it more from him.”

While he may not have a lot of moves when rushing, his length makes an appearance once again, because he is able to distance himself from offensive linemen while making a run at the quarterback.

In addition to owning the size and power teams want, Nelson said he’s been pleased to show scouts his athleticism and his football IQ when it comes to defensive schemes.

He certainly showed his athletic prowess at the NFL Combine, ranking among the top defensive linemen in the 40-yard dash, broad jump, 3-cone drill, and 20-yard shuttle.

Combine that athleticism with Nelson’s ability to learn — he was a second-team Academic All-American in 2018 — and he makes an intriguing prospect.

“One thing is for sure, is that it’s been fun to meet a lot of NFL people, talk football, and I’m excited to continue to be a full-time football player,” Nelson said.